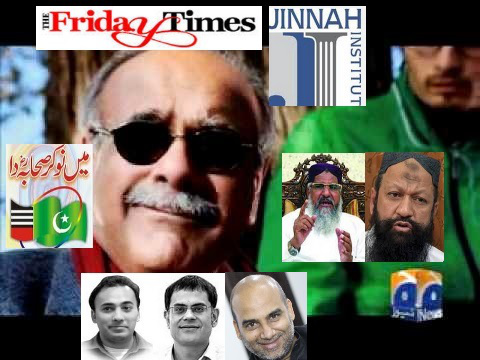 Editor’s note: Given that this specific post has been banned by Prime Minister Nawaz Sharif on the advice of ex-CM Najam Sethi, we are cross-posting it to express our solidarity with LUBP and support for free speech. The post was banned on 6 June 2013 by Pakistan government (Pakistan Telecommunication Authority) on the instructions of ex-CM Najam Sethi and current PM Nawaz Sharif. This does not augur well for the freedom of media and social media in Pakistan. We appeal to the media and rights groups to take notice of this blatant attack on free speech by Najam Sethi, PM Nawaz Sharif and Pakistan government.

Veteran Pakistan journalist Najam Sethi began his three-month tenure (from 27 March 2013 to 5 June 2013) by taking the following oath: “I will strive to preserve the Islamic ideology which is the basis for the creation of Pakistan”. But towards the end of his tenure through his action he proved that by: Islamic ideology” he meant “Takfiri Deobandi Islamofascist” ideology whose main plank is to kill mainly the Shias, but also Sunni Brelvis, Ahmadis Hindus, and Christians.

From day one, he, the self-style secular liberal set free Lashkar-e-Jhangvi/Sipa-e-Sihaba terrorists which followed a spree of Shia killings in various cities of Pakistan, from Karachi to Peshawar. He will be remembered more as a Saudi operative in Punjab than the chief minister of the province.

This post is a critical review of Najam Sethi’s short tenure as caretaker Chief Minister of the Punjab province.

Starting with his oath of office, Najam Sethi’s oath https://lubpak.com/archives/255845 , the hypocrisy only increased.

Clearly the true liberal voices warned of a double agent:

The BBC’s Asif Jilani exposed Najam Sethi’s links with intelligence agencies and the dark side https://lubpak.com/archives/256617.

Needless to say the Lashkar-e-Sethi or paid propagandists of the fake-liberal right-wing alliance and opportunists seeking positions were the overwhelming majority. https://lubpak.com/archives/255657.

Armed with these credentials Najam Sethi was the perfect man to make Pakistan a dominion of Saudi Arabia.

This articles shows Najam Sethi’s persistent desire to be useful to the the Islamist right-wing deeply rooted in the Riyal and the Dollar  https://lubpak.com/archives/255821.

First victims of the pro-Islamofacist Caretaker Chief Minister Punjab were the Christians https://lubpak.com/archives/256795.

Next it was the Ahmadiya Muslims’ turn to bleed under while Deobandi Islamofacists were protected under Najam Sethi’s rule https://lubpak.com/archives/258141.

Even Hindu prisoners got the wrath of Najam Sethi’s allies the ASWJ-LEJ, resulting in the unfortunate murder of Sarabjit Singh in Kot Lakhpat Jail, Lahore. https://lubpak.com/archives/260425

As ever those suffering largest death toll were the Shia. A new wave of Shia Genocide took hold in Punjab helped by the release of one hundred and twelve dangerous sectarian terrorists. https://lubpak.com/archives/266871

Some clever moves to give lasting strength to the pro Saudi Wahhabi-Deobandi agenda in Pakistan:

While being critical of the former Punjab government for giving stipends to Malik Ishaq of ASWJ/LEJ, Najam Sethi made no attempts to crack down on the terrorists. Instead he managed to release over a hundred of them with the help of right wing courts. https://lubpak.com/archives/265751

In the meanwhile Jhang was completely outsourced to ASWJ Deobandi terrorists who held the entire city hostage for at least one week terrorizing Sunni Barelvis and Shias, refusing to accept the elections results.

Poor governance and administration: Slow and insensitive response to victims of Gujrat school van tragedy, inaction against culprits responsible for fire in Lahore’s LDA plaza, Attacks on Christian community at various locations in Lahore and other parts of the Punjab. Not unlike 1997, Najam Sethi ensured massive rigging in favour of PML-N in general elections to implement the agenda of his handlers in Pakistani and international establishment.

Sethi had the audacity of going on his Riyal based Geo TV and say that he held a fair election. The right wing parties were having jalsas and rallies while the liberal progressives were confined to their homes through bomb blasts, murder, kidnappings and threats.

“If you shoot in the legs of three participants of a race, and then ask them to compete with the other contestants, would you call this a fair competition?“

Najam Sethi did not even have the decency to make a symbolic gesture in acknowledging the pain and difficulty for a father (Yusuf Raza Gilani) to contest election while his son was shot and kidnapped.