Multan (9 May 2013): Known terrorists (Sipah Sahasba terrorists backed by PML-N) on Thursday kidnapped the son of a former Pakistani prime minister who is also standing in the country’s elections. His secretary Mohiyuddin and bodyguard were wounded and later died. Five other activists of PPP were injured in the attack.

Ali Haider’s brother Ali Musa Gilani, speaking to the media, said that his party members were not carrying weapons nor keeping any guards as per Election Commission of Pakistan’s code of conduct. “There was no security, no weapons. They [gunmen] came and easily took him [Ali Haider] away.” Abdul Qadir Gilani, the former PM’s eldest son, also shared the same opinion and said that his party has been deprived of all security measures besides direct threats from the Taliban. Police officials told The Express Tribune that the target of the attack was Yousaf Raza Gilani, who was also present at the meeting. The gunmen kidnapped his son on being unable to kill the former prime minister.

Another police officer, Ghulam Mohammad Dogar confirmed the abduction. “It is definitely an act of terrorists,” he told reporters. An eyewitness told Geo News channel that the gunmen came to the spot in a car and fired indiscriminately at Ali Haider Gilani’s supporters. He said he had seen the gunmen bundle Haider into a car and drive away. The gunmen kept firing as they drove away, the witness said.

The incident happened in the Matital area on the last day of official campaigning for Saturday’s election, which will mark a landmark democratic transition in a country that has been ruled for half its life by the military. Provincial elections are also being held and Ali Haider is a candidate for the secular Pakistan People’s Party in the provincial assembly of Punjab. He has two other brothers standing for the national assembly. Footage on television showed Ali Moosa Gilani, another of the former prime minister’s sons, crying and trying to control irate workers of the Pakistan People’s Party. The banned Tehrik-e-Taliban Pakistan (TTP) has warned it will target secular parties like the Pakistan People’s Party and Awami National Party ahead of the May 11 general election. TTP has no presence in Punjab, Sindh and other urban centres of Pakistan where it operates in full public sight in the garb of Sipah Sahaba aka ASWJ.

This is the second high-profile abduction of a PPP leader after a similar abduction of Shahbaz Taseer by ASWJ-TTP terrorists a few years ago.

“Takfiri Deobandi militants came on a motorbike. They also had a car with them and they opened fire and abducted Yousuf Raza Gilani’s son Ali Haider in a black Honda,” police officer Khurram Shakur told reporters. “We have closed the entry-exit points and launched a search,” he said.

According to analysts, PML-N is dead scared of looming defeat in South Punjab at the hands of PPP. That’s why it used ASWJ terrorists to abduct Ali Haider Gilani.

This abduction is an act of terror by PMLN-sponsored Takfiri terrorists of Sipah Sahaba Taliban.

Some PTI and PML-N activists on social media are literally celebrating Ali Gilani’s kidnapping, describing it as a pre-planned staged drama. Shows their insensitivity and lack of humanity.

FIR of Ali Haider Gilani’s abduction must be registered against former CM Shahbaz Sharif who is the chief patron of ASWJ-LeJ terrorists in Punjab. Both ex-CM Shehabz & current CM Sethi should be interrogated due to their patronage of ASWJ terrorists, and indirect role in Ali Gilani’s abduction.

PML-N is the chief patron of ASWJ-LeJ terrorists in Punjab. Here’s proof: https://lubpak.com/archives/tag/pmln-support-to-aswj-lej-taliban-alqaeda-let

FIR should be filed against SC judges which ordered Gillani security to be taken back. Almost all of Supreme Court Judges as well as ASWJ terrorists happen to be on Nawaz Sharif’s payroll.

Half the elite force on Sharif family security but CJ Iftikhar Chaudry could only see protocol of Gilani and other PPP leaders. ECP said no to president when he demanded security for Ppp Anp Mqm http://beta.dawn.com/news/812706/ecp-presidency-at-loggerheads-over-security-ppp-allegations

Where is ISI-installed CM Najam Sethi? He withdrew security from Gillanis, and provided more security to pro-Taliban Sharif brothers.

According to an eyewitness, Ali Gilani was hit by a bullet, he was seen bleeding when PMLN-backed Sipah Sahaba militants dragged him into a car.

We peacefully ask Nawaz Sharif and Shahbaz Sharif to instruct their ASWJ-LeJ goons to ensure safe return of Ali Gilani. 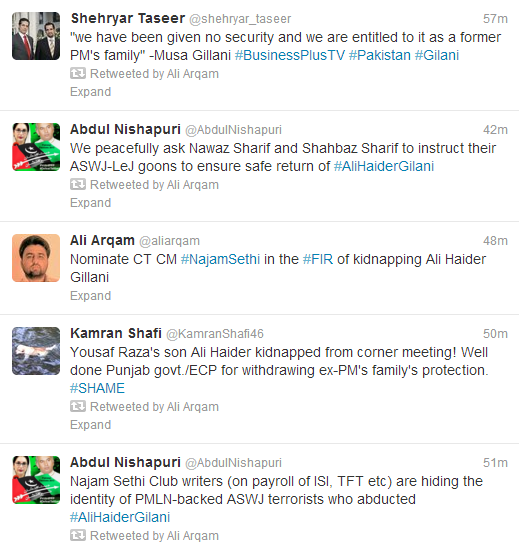 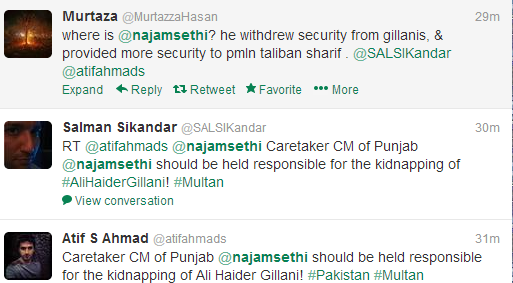 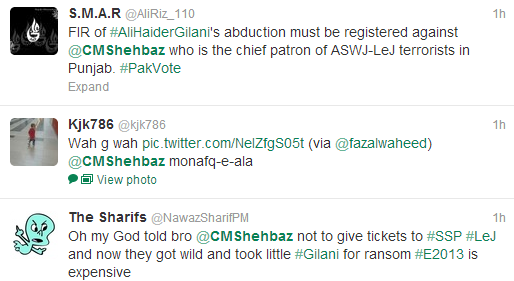 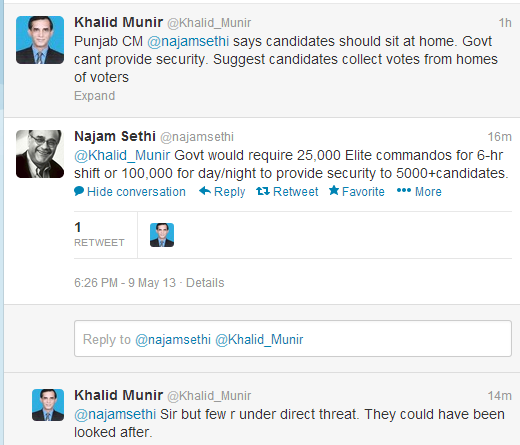 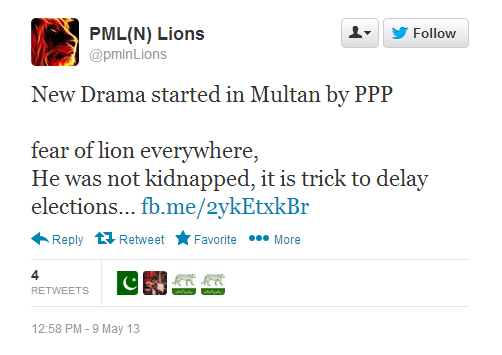 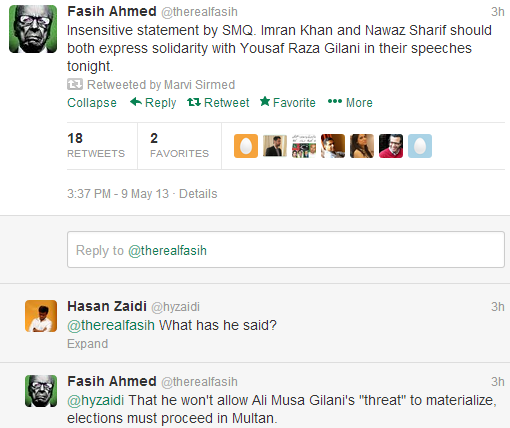 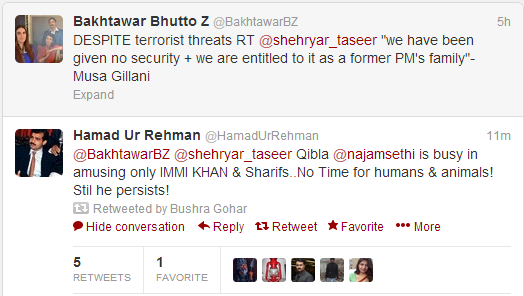 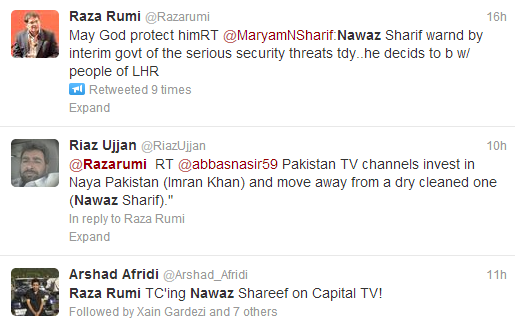 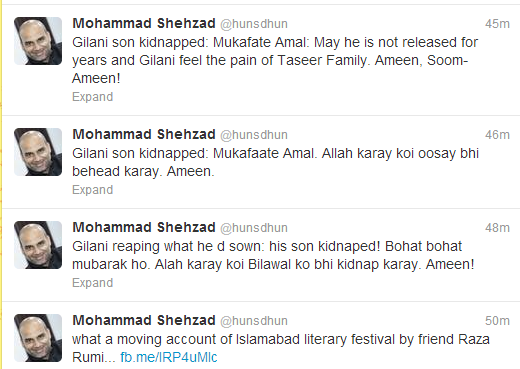