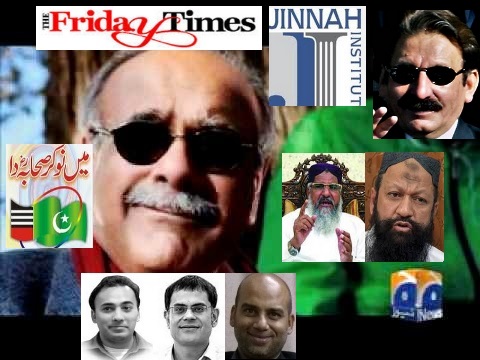 ISLAMABAD: The Election Commission of Pakistan (ECP), led by Justice (retired) Fakhruddin G. Ebrahim, has simply failed to prevent 55 candidates from the Punjab, belonging to 10 different sectarian groups, from contesting the general elections despite the fact that intelligence agencies had warned the ECP that they were on terrorist lists and had provided all the names.

Punjab government is currently led by caretaker Chief Minister Najam Sethi, the journalist known for humanizing and glorifying the head of banned terrorist group Sipah-e-Sahaba (Ahmed Ludhianvi Deobandi) through his TV talkshow (Aapas ki Baat) and magazine (The Friday Times). Pakistan’s apex court is currently led by Chief Justice Iftikhar Chuahdry who is known to have soft stance towards Taliban, Sipah-e-Sahaba and other right-wing groups.

These names (of Takfiri Deobandi terrorists contesting elections) are also listed on the 4th Schedule of the Anti-Terrorism Act 1997 for their alleged involvement in terrorist activities. According to well-informed sources in the Ministry of Interior, the intelligence agencies had provided to the ECP a complete list of 55 candidates who had filed their nomination papers to contest the national and provincial assemblies polls from 20 districts of the Punjab.

The ECP was further requested not to allow these candidates to contest the elections because they had been involved in terrorist activities due to which their names were placed on the 4th Schedule of the Anti-Terrorism Act.

Under this 4th Schedule of Section 11-EE of the Anti-Terrorism Act 1997, persons charged with terrorist activities, after being released from jail, are kept under observation and they have to inform their respective police stations before leaving their hometowns and upon their return. Such individuals are bound to provide a surety bond to the police for good behaviour and peaceful conduct.

The ECP subsequently forwarded the list of 55 sectarian offenders (most of them belonging to banned Sipah-e-Sahaba Pakistan, currently operating as Ahle Sunnat Wal Jamaat ASWJ) to the respective returning officers, with the direction to proceed against them. However, the ECP was informed that the returning officers were not legally empowered to impede these candidates from contesting the elections because the Code of Conduct issued by the ECP for the general elections lacked a particular clause to disqualify the sectarian elements.

Even though the ECP has strictly prohibited candidates from using caste, ethnicity and religion to seek votes and besides warning of a three-year jail term for any candidate found using such means in the campaign, no such proscription or jail term was recommended in the ECP’s Code of Conduct for those running their campaign on sectarian lines. Therefore, the ECP was not in a position to press the returning officers on the issue any further.

A sympathiser of religious parties said these candidates are facing only terrorism charges and no court decision has come in this regard. He said several top politicians, including a former prime minister, were allowed to contest polls on the grounds that they were just facing charges, which were not yet proved.

According to the list of the sectarian elements running for the coming elections despite being listed under the 4th schedule 40 of the 55 candidates who have been allowed to run for the polls, belong to the defunct Sipah-e-Sahaba Pakistan (SSP) which has already been renamed as Ahle Sunnat Wal Jamaat (ASWJ), led by Maulana Mohammad Ahmed Ludhianvi Deobandi.

His second in command in the ASWJ is the Lashkar-e-Jhangvi fame, Malik Mohammad Ishaq, who is the vice president of the ASWJ. However, since the ASWJ did not register itself with the ECP, it has fielded candidates on Muttahida Deeni Mahaz (MDM/United Religious Front) platform.

Approached for comments, a spokesman of the Election Commission of Pakistan simply expressed his ignorance about 55 sectarian offenders having been allowed to contest the elections.

The ECP only provided information, as received, from the FBR, NAB, SBP and other governmental authorities, to the returning officers”, the ECP spokesman added.