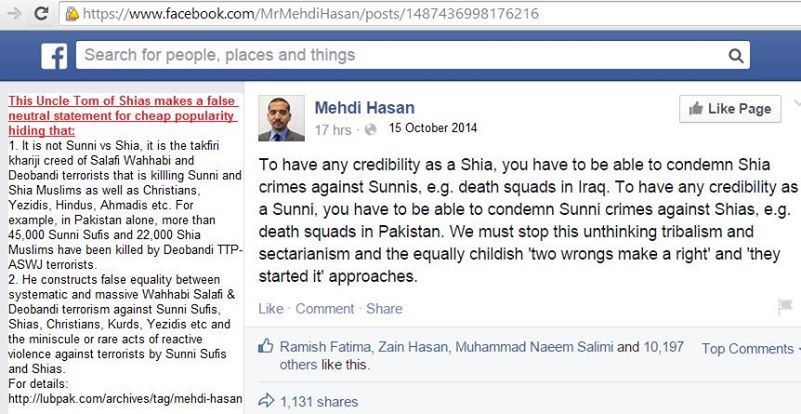 Credibility is the one word that is farthest from the mind when looking at the statements of Mehdi Hasan. He has build a budding career as a Taliban/Al Qaeda/ISIS apologist with the typical mixture of false binaries, deliberate obfuscations, deflections and omissions. His rhetoric is catered towards the naïve, the ignorant and those who conceal their racism of lower expectations under the veil of political correctness.

His Sunni vs Shia binary is baffling. According to Mehdi’s reductionist and dishonest worldview view logic, ISIS has been left out of the discussion altogether. As per his dishonest binary, the US coalition, which also includes the Salafist theocracy/kingdom of Saudi Arabia is also Shia – since they too are bombing someone in Iraq!

In his cookie cutter approach to deceptively simplify complex issues, Mehdi conveniently omits some crucial facts. He forgets to mention the role of ISIS in destroying the graves and shrines of the Holy Prophet’s companions at historic locations in Iraq and Syria. These monuments are revered, by both Shias as well as Sunnis, while being opposed by Salafis and their South Asian ideological cousins, the Deobandis. He leaves out the crucial fact that the Salafist-Deobandi ISIS has also committed the massacre and rape of Christians, Yezidis and Sunni Kurds.

So ISIS that is committing the mass scale genocide of Sunni Kurds, Yezidis, Christians and Shias in Iraq does not even deserve a mention by Mehdi Hasan in his mention of violence in Iraq!

The Christians of Iraq have been provided sanctuary at the shrine of Imam Ali Ibne Abi Talib in Najaf. This shrine is one of the holiest sites for Sunni, Sufi and Shia muslims after Mecca and Madina.

Similarly, Mehdi Hasan makes the same bigoted generalization that Pakistan’s commercial liberals make when they reduce and obscure the violence of Takfiri Deobandi militant groups (ASWJ-LeJ, TTP, Jundullah) in false binaries terms of Shia vs Sunni. Sunni Barelvis/Sufis are one of the most significant victims of Deobandi violence in Pakistan and hundreds have been killed in large scale massacres and attacks at various Sufi shrines all over Pakistan. Deobandi groups have also targeted Shias, Christians, Ahmadis and Hindus along with Sunni Barelvis and Sufis.

In typical literalist tradition, Mehdi Hasan has removed the scale and context in which Shia Genocide is taking place in Pakistan and reduced it to tit-for-tat violence. He has wiped out the mention of Al Qaeda and ISIS which has killed and maimed hundreds of thousands of Shias, Christians, Sunni Kurds, Yezidi Kurds, Turkmans, Chaldeans and other communities since 2003. He has wiped out any reference to the destruction of shrines, mosques, churches and other holy sites that are revered by millions of Iraqis from all sects and religions. Has there been any violence by Yezidi Kurds even after they recently faced a genocide by the Salafist-Deobandi ISIS? Apparently, for Mehdi Hasan, the only violence that is taking place in Iraq is the sporadic and targeted violence by Shia militias since 2006. Once again, he skips the part where such violence has been condemned and stopped by Iraq’s most revered Shia leader, Ayatullah Sistani. 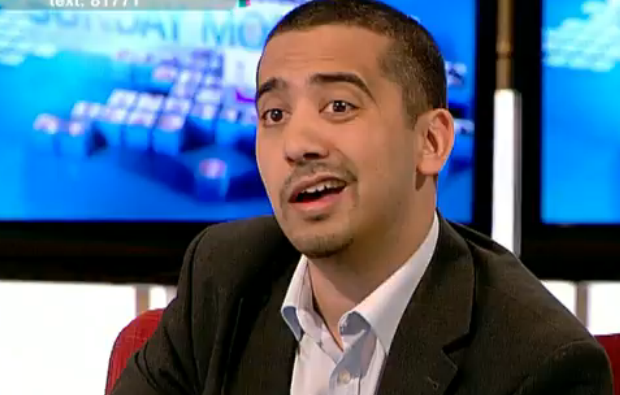 Mehdi Hasan also conveniently skips the part on how the violence against Shias in Pakistan has the backing of Deobandi hate fatwas that are consistently refreshed by the Ulema Deoband council.   He leaves out the part where incitement to Shia genocide by Takfiri Deobandis has graduated to the level of awards ceremonies.

When talking about tribalism and sectarianism to draw attention to his pathetic attempt at Shia vs Sunni binary, Mehdi Hasan’s arguments have no basis in facts. Like many other frauds, Mehdi Hasan leaves out the part which highlights the ground reality that Sunnis in Iraq have a higher representation in parliament in proportion to their population.

Based on his shallow rhetoric, Mehdi Hasan is the typical Uncle Tom Shia who is interested in making glib and meaningless rhetorical statements that obfuscate the real concern of the genocidal situation faced by Shias in Pakistan. His rhetoric is designed to facilitate Shia haters while nourishing apologists within the Shia community – the Kufi Shias of our times.

Mehdi Hasan has been called out on his dishonest apologist and denial statements regarding Wahabi-Deobandi terrorism in the past. His dishonesty has a pattern.