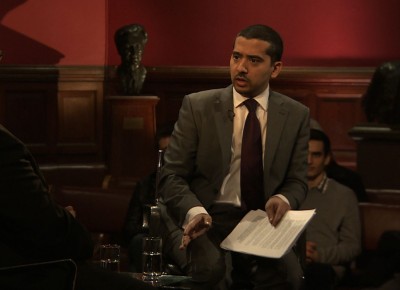 Anne-Marie Waters | Islam Is Not A Peaceful Religion | Oxford

Daniel Johnson | Islam Is Not A Peaceful Religion | Oxford Union

This is a debate that should not have been held. I watched all sides of the debate. Due to the wide generalization of the premise, it would be impossible to determine a satisfying outcome. I will explain: A debate designed to appeal to academia, misses the point in the real world.

In a debate conclusions attempt to be reached through logical reasoning based on a “premise.” In this case, both premises are absurd: “Islam is a peaceful religion,” vs. “Islam is not a peaceful religion,” any conclusions drawn are irrelevant in the real world. As mentioned by Mehdi Hasan, the “cherry-picking” of data is not sufficient for a conclusion, but, in fact, both sides used this practice. It made the debate painful to watch. The debate was what Plato called, “eristic;” a type of argument where the participants fight and quarrel without any reasonable goal. Mind you, they fully intended to win their points, but, their eristic argumentation sought conflict as opposed to conflict resolution. Here is my point:  the debate was used to indict or elevate a religion, instead of a more useful illuminating of the factual information available on global terrorists. Terrorism, facts on-the-ground, have nothing to do with the hyped-up notion of a scholarly debate on whether there is a peaceful or non-peaceful Islam.

This debate itself obfuscates the terrorist problem both sides danced around. The problem is not determining whether Islam is violent. Which begs the question, is Christianity violent? Which is an equally useless debate.  The debate should have been based on the real-world issue of Wahhabi/Salafists. So, the“cherry-picking” becomes a fruitless debate on Islam, encouraging Hasan to grasp at such irrelevant occurrances such as individuals accused of U.S. bombing of abortion clinics. Well, there have been merely a handful of those, and Christianity condemns them. There have only been eight murders relating to abortion in the U.S. . The total number of violent acts relating to abortion merely in the hundreds, so low as to be insignificant considering given over 300 million U.S. population.  But, debate topics such as this encourage the focus on a religion, resulting in obfuscation of terrorist anomalies within a religion.

How quickly we could fool ourselves into condemning entire religions of Islam, or Christianity, or Judaism- even Buddhism: Ashin Wirathu, a Burmese Buddhist spiritual leader encourages the anti- Muslim movement, and the violence unleashed on Muslims. This, nevertheless, does not represent Buddism, nor define it now as a non-peaceful religion. Muhammad began preaching Islam around 610 AD. Islam is over 1400 years old, a younger religion than Hindu, Buddhism, Judaism, or Christianity, all of which were based on love and respect for one another.  Still, for the sake of argument, let’s consider for a moment that Islam is not a peaceful religion if we trot out and dust off the argument that Islamic warriors captured Medina, Mecca, advancing into Jerusalem, and onward until they reached and conqureed Spain; then, the Caliphate established, the Ottoman Empire and its oppressive history. These historical facts alone constitute “cherry-picked data” to attempt to make a good case for Islam being violent. We can continue this exercise in futility by doing the same to Christendom.

So not only is the premise wrong but Islam is being compared to Christendom and Christianity both simultaneously.

“It is difficult to generalize about Islam. To begin with, the word itself is commonly used with two related but distinct meanings, as the equivalents both of Christianity, and Christendom. In the one sense, it denotes a religion, as system of beliefs and worship; in the other, the civilization that grew up and flourished under the aegis of that religion. The word Islam thus denotes more than fourteen centuries of history, a billion and a third people, and a religious and cultural tradition of enormous diversity. … For more than a
thousand years, Islam provided the only universally acceptable set of rules and principles for the regulation of public and social life. Even during the period of maximum European influence, in the countries ruled or dominated by European imperial powers as well as in those that remained independent, Islamic political notions and attitudes remained a profound and pervasive influence.” — Bernard Lewis, Crisis of Islam – Holy War and Unholy Terror, pgs. 1 and 13

The debater’s failed premise ruins the debate by missing realities in the world. Daniel Johnson mentioned that the previous day a British soldier was beheaded by a Muslim. He fails to mention by whom? A Muslim representing Islam? No. The killer may have thought he was, but, he was a Takfiri Deobandi, and not part of Orthodox Islam. This overlooked detail kept focus on Islam, not the terrorists! The relevent debate could be a two sentence argument : Are the terrorists Takfiri Deobandi Wahhabi’s? Yes. Are they violent? Yes. Is Islam therefore violent? No.

It is easy with this incendiary premise to capture attention. With it, we could also find Judaism and Christendom violent. Having read the Quran, Hadiths, Sunnah, many times, as well as the Bible and the New Testament, it is easy to malign by a quote out of context, and difficult to navigate through ancient teachings and practices and interpretations and reconcile them with modern interpretations. Simply read the Old Testament, and you are left with bloodshed from a “God of Wrath.” If you’ve heard the infamous atheist, Richard Dawkins’ description of the God of the Old Testament you might be shocked, as he states: “The Old Testament God is arguably the most unpleasant character in all fiction: jealous and proud of it; a petty, unjust, unforgiving control-freak; a vindictive, bloodthirsty ethnic cleanser; a misogynistic, homophobic, racist, insecticidal, genocidal, filicidal, pestilential, monomaniacal, sadomasochistic, capriciously malevolent bully.” However, what is more shocking is that if you read the Old Testament, this wrathful God is worse than this description. This is the Lord of the Jews and Catholics, and he is indeed, vindictive, murderous, jealous and is fine with slaves, stoning and beheading,

The Lord gives his commandments through Moses in Deuteronomy, orders for parents to have their children stoned to death for indiscipline. When we read of “Mormon” daughters married to favored uncles and brothers-in-law, who sometimes have wives already, then we might be more careful in accusing Mohammad (PBUH) of being a pedophile, for having a nine year old wife, with whom we do not know when the marriage was consummated, if ever; and when we read the Catholic Old Testament and Torah, the Lord speaking through Moses demands  of his generals after battle: “Now, therefore kill every male among the little ones, and kill every woman that hath known a man by lying with him. But, all the women-children that hath not known a man by lying with him, keep alive for yourselves.”

Does this prove that Judaism or Christendom (as opposed to Islam) is violent? No.

The problem is not Islam as a violent religion. The problem is not the Clash of Civilizations; nor clash of religions, or presumed clash of Shia and Sunni sects. The problem are the violent, small, scattered terrorist organizations that have managed to high-jack Islam for its cause. The Saudi-based Wahhabi/Salafists are the ones with global Caliphate fantasies on the mind.

These debates were held by intelligent academics, none of whom were religous scholars, and are essentially missing the core issue: the Takfiri Deobandi Salafi/Wahabi Jihadis are the terrorists. They declare themselves enemies of both non-Muslims and Muslims who align with the Orthodox moderate view of the Islamic religion. Although Mehdi Hasan’s narrative (himself a Shia), remains broad, intellectual honesty requires mention of the perpetrators in no uncertain terms. Over 95% of terrorists captured in Pakistan and 95% of terrorist organizations are Deobandi or Wahhabi. Please let us not debate Islam, when it is the Wahhabi/Salfists that are the issue- and these are not being publicized by the establishment press, or mainstream television. This leaves the common person on the street, those busy making a living and/or caring for a family, or the young student involved in studies, all with limited time, easily confused, and outraged at the wrong group of people. This misinformation risks whole cultures, nationalities, or religions unfairly condemned.

The opposition brought up Justice as the Quran’s message: Justice? What of the Pakistani courts and authorities turning a blind eye to tribal and Shia murders, beheadings, and Honor Killings; No one dared speak of the tribal Jirgas or “Panchayati Raj,” “pashtunwali,” or, “do Ghairat” concerning justice, which is local law, not Islamic Law, and not Orthodox Islam. Or, what of the real-world of a corrupted Chief Justice in Pakistan who frees Jihadists – all sympathizers to Takfiri Salafists. Justice? Who’s justice? Should we suppose Malala shooting was justified by Islam? No, it was justified by Taliban- Takfiri Salafists. These are the anti-women, anti-education thugs that claim Islam, while killing Muslim brothers and sisters.   I wonder if women murdered because they were raped can be consider Islamic justice? No. Hasan went on: Number 2: “Quranic injunctions pertaining to war,” “are ethically and morally justified,” Deen also, asserted this. Justified by whom? Sipah- e-Sahaba, now renamed as Ahl-e-Sunnat wal Jamaatcan, can justify killing Shia men, women and children in Quetta, and LeT in Mumbai with no problem and assign it to Islamist Jihad. This does not make a case for or against Islam, as it is not a universal Islamic Jihad. Orphans from Madrassas strapped with explosives and blow up a bus where Shias travel home….justified by Islam? Deen’s argument for peaceful Islam through, a. Quranic justice and b. ethical war, makes the case better for Anne-Marie Waters who asserts Islam is violent.

The debate should instead have been a valuable discussion of the roots of true global-terrorism: It goes back to Saudi Mohammad ibn Abd al-Wahhab (1703-1792), who collaborated with Mohammad ibn Saud, defining an austere and strict sect of fundamental interpretation of the Quran, that initiated almost immediate violence- 1802 Wahhabi forces sacked Karbala and massacred every identifiable man, woman and child that was Shia. Such violence of this Deobandi Sunni sect (not Orthodox Sunnis, who are peaceful) is reminiscent of the #Shia Genocide we see today in Pakistan. This was absent in the debates. It was sad, that what could have been much needed enlightment, became a meaningless academic debate. This violence is the root evil and continuance today of terrorism we see around the globe- not Islam.