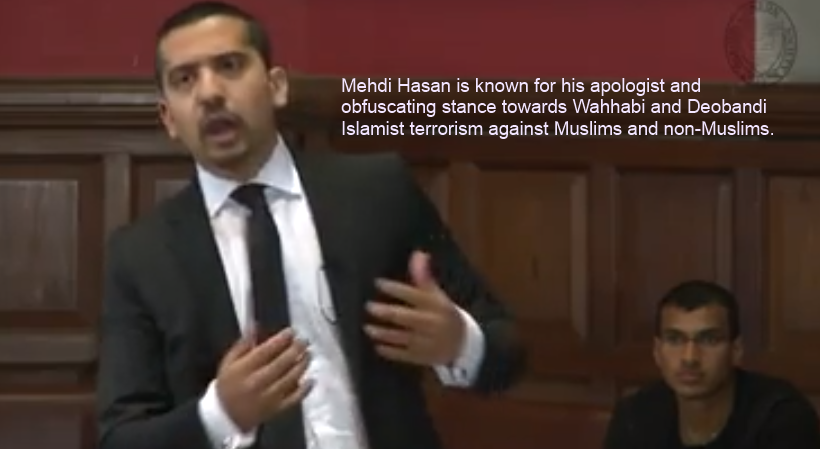 Mehdi Hasan is a presenter of Al Jazeera Television and a political editor of UK version of The Huffington Post. British Secular Muslims are worried that a journalist and opinion maker of his stature is misguiding not only Western audience but is also hurting the interests of secular and moderate Muslims across the globe.

Mehdi Hasan’s recent address at Oxford Union debate on Islam has gone viral, and many Muslims, including some avowedly pro-Taliban and pro-Jihadist Salafi-Wahhabi Deobandi websites, cannot contain themselves in celebrating his accented spunk in defending the faith while attacking the Judeo-Christian heritage.

Mehdi’s bluster is impressive but fails to convince.

The crux of Mehdi’s thesis is that Islam and Muslims cannot be blamed for the epidemic of violence that emanates from its midst. And he supports that by stating that the motivating force is secular, economic and political factors rather than religion.

That line of argument is disingenuous to say the least. Economic and political issues drive anything anyone does anywhere, but that does not mean that religion is not then used to motivate and justify the violence accompanying political objectives.

One may hypothesize that all Salafi-Wahhabi and Deobandi Khilafah or Shariah lovers are liberal, secular creed but that does not stop them from using religion ruthlessly to achieve their earthly objectives.

There is considerable material within the Salafi-Wahhabi and Deobandi interpretations of the Quran and the Haidht that can motivate the believer to act violently for heavenly rewards, even if in reality he is being manipulated to achieve cynical political objectives. That is an issue, which ‘Liberal Muslims’ such as Maajid Nawaz, Mehdi Hasan etc refuse to acknowledge. The question that should be vexing such Muslims is not that why are the peace loving majority tainted for the sins of the very few, but rather how can religion be stopped being used by minority Salafi-Wahhabi and Deobandi Takfiris to motivate violence and excuse oppression.

Those who think suicide bombings have no connection with the belief system might need to explain why there are no Sunni Sufi, Shia or Ahmadi suicide bombers. Today, the Salafi-Wahhabi or Deobandi suicide bomber feels he is acting nobly and will thus be eternally rewarded.

Throughout history it is not the majority 93% (the number Mehdi claims are peace loving Muslims) but rather the small highly motivated minority (Salafi-Wahhabi and Deobandi in the context of Islam) who cause the greatest mischief. Very often it is this 7% that set the agenda and doom the fate of many for generations to come.

We ask Mehdi Hasan: Can we treat or defend Islam as a unitary religion, wiping out or denying the Salafi-Wahhabi, Deobandi aspect of violence against all others including Sunni and Shia Muslims, Christians, Jews, Hindus, secularists, liberals etc?

In the context of Pakistan, at least 21,000 Shia Muslims have been killed by Takfiri Deobandi (semi-Wahhabi) terrorists in recent decades. Can Shia genocide by Deobandi and Salafi-Wahhabis in Pakistan and elsewhere be attributed to a secular cause?

Mahdi Hasan is an example of a typical apologist for extremist Muslims such as Takfiri Deobandis and Takfiri Salafi-Wahhabis. He presents Muslims as a monolithic group. In reality, Takfiri extremists belonging to Salafi-Wahhabi and Deobandi sects are at the forefront of terrorism and extremism and it is dishonest to pass on the blame onto Jews and Christians. Imperialism is not restricted to any religion and Saudi-Wahabi imperialism needs to be addressed – Muslims simply cannot afford the ostrich mentality of people like Mehdi Hasan.

In a recent article in The Independent, veteran journalist Robert Fisk provides a good response to Mehdi’s articulate dishonesty at Oxford. Fisk argues that instead of hiding the Muslim or Middle Eastern or Pakistani identity, all criminals must be clearly stated with their ethnic, religious or political identity as appropriate to understand the context and nature of their crime. In other words, instead of obfuscating the Salafi-Wahhabi and Deobandi identity of terrorists and lumping them with all Muslims, they must be clearly named and condemned and their ideological sources of Saudi Salafi hatred must be categorically exposed and confronted. 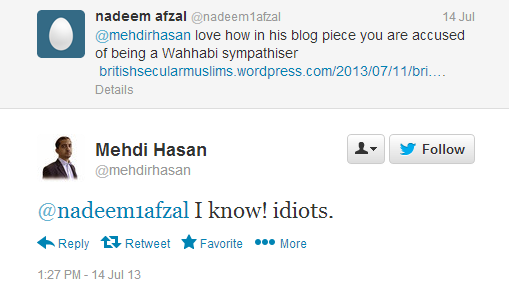