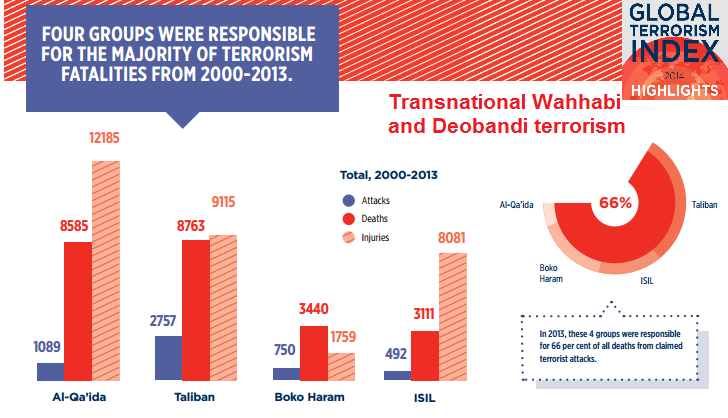 In this post, I provide a few examples of how transnational Deobandi and Wahhabi terrorism is being systematically misattributed to the Shia, Sunni Sufi or all Muslims by the Deobandi Wahhabi apologists, the West-Saudi alliance apologists or denialists (fake liberals), and the Islamophobes.

In the aftermath of the Charlie Hebdo massacre of journlaists by the ISIS-inspired Wahhabi and Deobandi terrorists, some “liberals” are digging up Khomeini’s grave in an attempt to somehow hold Shia clerics responsible for the Paris massacre while refusing to see a link between the West-KSA nexus in Syria and elsewhere and the blowback in the West. They are teating the Paris massacre as an isolated incident which has no connection whatsoever to the global acts of terror by the Salafi Wahhabi and Deobandi militants.

None of them is stating how the West enabled and truned a blind eye to the export of radicalized Wahhabi Salafi and Deobadni terrorists for holy Jihad in Syria and Iraq. According to media reports, the Wahhabi Salafi terrorist Amedy Coulibaly recorded a chilling ‘suicide’ video before attacking the Jewish supermarket and killing four hostages. In the slickly edited footage, the 32-year-old pledges allegiance to the Islamic State (IS aka West’s Syrian Rebels until a year ago) and its self-proclaimed Caliph, Abu Bakr al-Baghdadi. The video emerged as Coulibaly, who also killed a policewoman, was linked to the shooting of a jogger on the same day 12 people were killed in the Charlie Hebdo massacre. (http://www.dailymail.co.uk/news/article-2905302/Calm-stare-Jewish-deli-terrorist-Jihadist-s-ISIS-suicide-video-emerges-confirms-link-Charlie-Hebdo-killers-calls-fellow-vigorous-Muslims-defend-prophet-Mohammed.html)

Patrick Cockburn writes (in The Independent):

“There is a feeling of inevitability about the attack in Paris. The likelihood must be that the killers were Islamic Wahhabi Deobandi fanatics, the murder of the journalists and police underlining the degree to which the ferocious religious war being waged in Iraq and Syria now affects all of the world. Regardless of whether or not those who attacked the Charlie Hebdo office have any direct connection with this conflict, it has provided an ideal seedbed for Islamic extremism. It was culpably naïve to imagine that sparks from the Iraq-Syrian civil war, now in its fourth year, would not spread explosive violence to Western Europe. With thousands of young Sunni Wahhabi and Deobandi Muslims making the difficult journey to Syria and Iraq to fight for Isis, it has always been probable that some of them would choose to give a demonstration of their religious faith by attacking targets they deem anti-Islamic closer to home.” 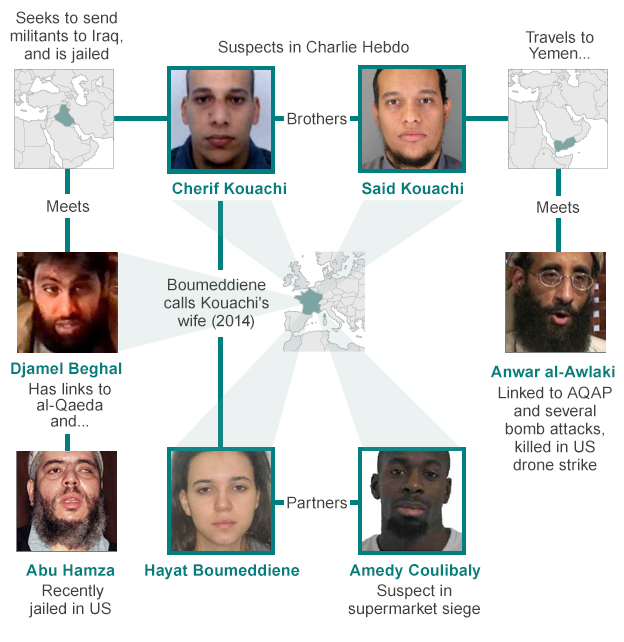 However, the above facts and arguments are irrelevant to the Deobandi/Wahhabi apologist and the West apologist “liberals” and the Islamophobes. Of course, in their attribution of Paris massacre to Shias, Sunni Sufis or ALL Muslims, there is no mention of the USA’s lasting alliance with Suadi Arabia and its continual investments in the transnational Wahhabi and Deobandi Jihadist outfits from Af-Pak to Libya and Syria to Bahrain, and the Jihadist training centres in Pakistan (1980s) and Turkey (present). Harder it is to admit that what the West tried to sow in Damascus is being repaed in Paris. They forget that ideology emanating from West’s own allies is responsible for this terrorism. [As Saad Mansoor said: Those who are supporters of the more radicalised versions of ideology dont get to question the ideology. West cannot give crap to everyone while supporting oppressive terror supporting Gulf regimes. Same sactions should be handed over to Gulf as done to Iran and North Korea. Islamic intolerance of blasphemy will die down once these regimes come down and people start focusing on living in this world more than bothering about the next one. It is only natural.]

Academically, Khomeini is as much to be blamed as are Omar the Second Caliph (r.a.) and other historical figures on their opinions or actions on the blasphemy issue. However, all of them are dead since long, we don’t see systematic or organized violence by Sunni Sufi or Shia Muslims nor we see blasphem inspired murders by the followers of Khomeini. Instead we are dealing with the Salafi/Wahhabi and Deobandi terrorism which is sponsored and enabled by none else than the Saudi Kingdom and its Western supporters.

It is inaccurate to describe the Paris massacre as “Islamic intolerance of blasphemy”. It was just another act of global terrorism which is very systematic and connected and doesn’t need a pretext of blasphemy or whatever to murder ‘others’. Indeed, while Wahhabi Deobandi terrorists were massacring journalists in Paris (on the alleged charge of blasphemy of the Prophet), their Deobandi comrades in Pakistan were massacring Shia and Sunni Sufis Muslims in Rawalpindi – their crime: they were praising the Prophet in a Milad. (Of course, there is no hashtag in support of the 8 Shias massacred by Deobandis in Rawalpindi, no columns, no tweets, no facebook statuses etc.)

Islamic, Islamist, Sunni, Terrorists, Extremists etc —- all of these generic and non-specific terms serve to obfuscate the common identity of terrorists worldwide, 99.9% of whom belong to Deobandism or Salafism/Wahhabism.

Now compare the above data with more than 80,000 Pakistanis (including more than 45,000 Sunni Sufis and 22,000 Shias) massacred by Deobandi terrorists!

Generic condemnation of all sects and faiths is nothing but a tactic to deflect attention from Deobandi and Wahhabi terrorism. A boring tactic!

Ahmed Raza Khan, Khomeini, Omar ibn Al Khattab (ra) are long dead along with their opinions and fatwas but their Shia and Sunni Sufi followers are not massacring Christians in their churches, Jews in their synagogues, Ahmadis in their mosques, Sunni Sufis in their shrines and Shias in their Imambargahs. Nor are they massacring journalists in Paris or elsewhere.

“Liberals” and “atheists” must not hide behind stale pages of history to obfuscate, dilute or justify Deobandis and Wahhabis’ crimes happening int the world today. Those who are massacring innocent people for the last several decades are reliving the legacies and worlviews of Shah Waliullah, Ibn Qayyim, Ibn Taymiyyah and Muhammad ibn Abd al-Wahhab. Treatement is needed where the problem is!

Of course, there are many problems and issues not only within Islam (eg no sane person can support Ahmed Raza Khan or Khomeini’s fatwas on blasphemy etc) but also in other faiths and ideologies worth addressing including within Western democracies and their double standards on free speech, democracy and Jihadism. The West’s unethical sale and export of arms to Gulf monarchies, the use of Jihadist mercenaries for strategic purposes, and the oil-wars and alliances cannot be ingored. However, that is a separate topic which has nothing to do with the inherent violent nature of Wahhabi and Deobandi cults and terrorism in Paris or elsewhere that doesn’t neeed a pretext (blasphemy or no blasphemy) to murder ‘others’.

Indeed, generic Islam bashing and misattributing Wahhabi and Deobandi terrorism to ALL Muslim sects and clerics is nothing but a form of Islamophobia and an attempt to deflect attention from where the problem lies. Aamir Hussaini’s article (in Urdu) on Charlie Hebdo is worth reading: https://lubpak.com/archives/330419

Another similar “liberal” recently revealed in a newspaper article that some Shia muftis had declared that Salmaan Taseer was liable to be killed. https://lubpak.com/archives/330377

Yet another “liberal” revealed that Taseer’s son was kindapped and being tortured by Sunni Sufis/Barelvis. https://lubpak.com/archives/330403

Some “liberals” used the Salmaan Taseer murder to bash Sunni Sufis/Barelvi but they hid the fact that Mumtaz Hussain Deobandi aka “Qadri” belongs to a Deobandi family of Rawalpindi and he was baited by none else than Abad Dogar Deobandi, a PMLN-ASWJ leader who had announced a reward of Rs. 10 million for anyone who would kill Taseer. https://lubpak.com/archives/329352

Only a few days ago, the tragic siege and massacre in Sydney by a Wahhabi terrorist was attributed to Shia Muslims. http://www.shiapac.org/2014/12/16/cafe-lindt-how-to-demonize-the-shia-by-laleen-ahmad/

Previously another Pakistani “liberal” tried to prove that a notorious Ahrari Deobandi, a known
Shia hater, was in fact himself a Shia. https://lubpak.com/archives/307463

I see a clear and systematic attempt by fake liberals to misattribute Wahhabi and Deobandi terrorism to Sunni Sufis and Shias or/and to deflect attention from the common ideology and construction of the transnational terror machine. Can’t they spend a few minuts to review the Global Terrorism Report 2014 and see which two ideologies are listed as most violent? https://lubpak.com/archives/327362 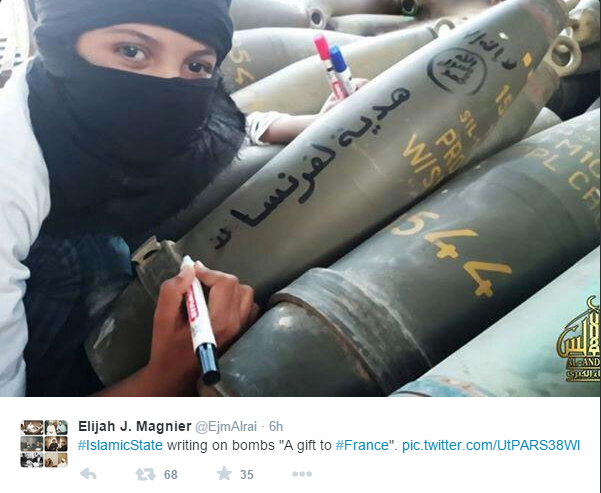 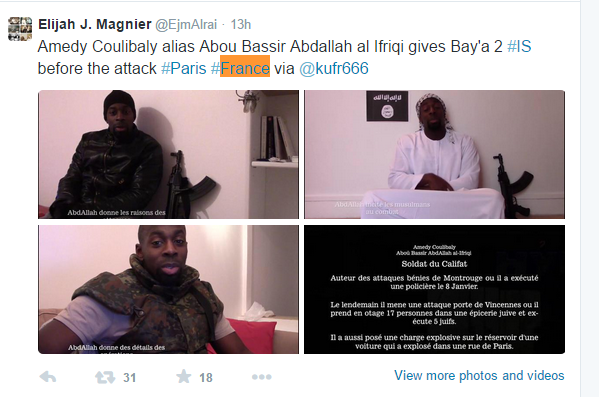 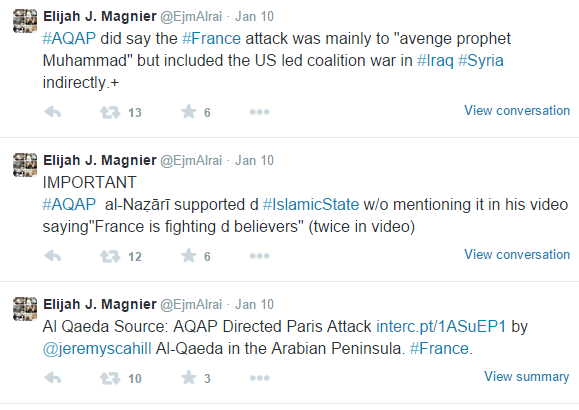 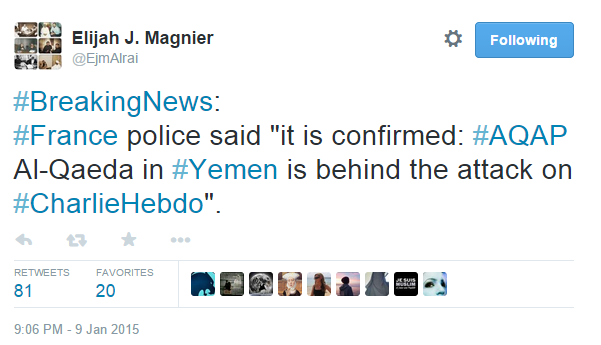 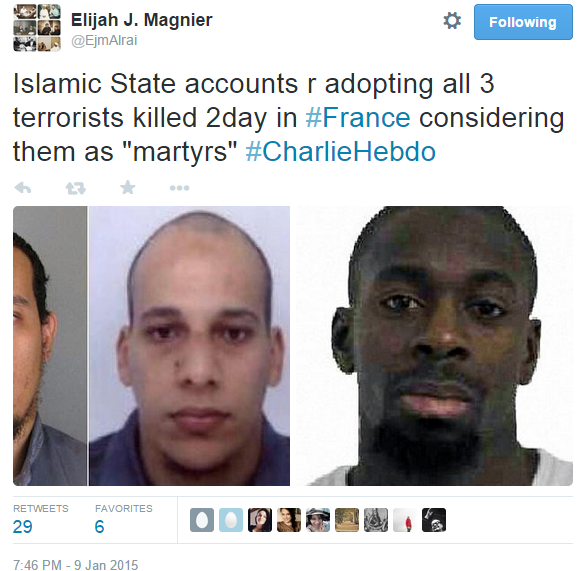