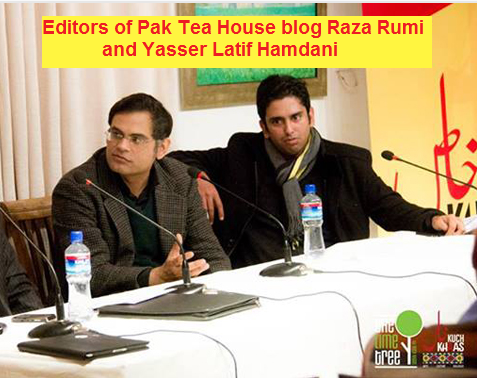 In his recent post on Pak Tea House blog (chief edited by Raza Rumi), lawyer-blogger Yasser Latif Hamdani has recycled one of his own articles published on Pak Tea House on 15 November 2009 to implicate Shia Muslims in the anti-Ahmadiyya and anti-Shia party, Majlis-e-Ahrar, a Deobandi hate outfit.

Not only has Yasser Latif Hmadani recycled a hateful and baseless article, he did not feel any hesitation in circulating a hateful lie which may only serve to further stigmatize Shia Muslims, Pakistan’s most target killed faith group at the hands of Deobandi terrorists. He has also tried to create divisions between Shias and Ahmadis, two persecuted communities of Pakistan.

Yasser Hamdani made a claim that Mazhar Ali Azhar Deobandi, a leader of the Ahrar, was a Shia cleric. This lie was crafted and propagated by none else than Deobandi founders and leaders of the Ahrar for multiple purposes: insulting Shias, showing artificial broad-based support of the Ahrar, creating offensive nuisance for Muhammad Ali Jinnah etc. The same lie was also uncritically reported by Justice Munir who notes that while Mazhar Ali Azhar is – presented or reported by the Ahrar as – a Shia:

“Madha-i-Sahaba with him (Mazhar Ali Azhar) is dearer than life. And during the Shia-Sunni riots in Lucknow both he and his son adopted the slogan which rouses the ire of every Shia and went from Lahore to Lucknow to fan the Shia-Sunni fire. Speaking outside the Bhati Gate at a public meeting ofthe Ahrar, he said that he had, for the preceding two or three months, been asking the League whether the names of Sahaba-i-Karam would be revered in Pakistan but had received no reply. Hea lleged that in the Congress governed provinces where the League had no power. The League were not permitting the Sahaba to be named with reverence and asked whether if power passed to the League, the state of affairs would bethe same as in Lucknow and other provinces where Muslims were in amajority and Madha-i-Sahaba would be an offence. Proceeding he inquired if words of praise for Hazrat Abu Bakr, Hazrat Umar and Hazrat Usman could not be uttered in Lucknow and Mahmoodabad what would be the condition in League’s Pakistan and what interest the Musalmans could have in such Pakistan (‘Shahbaz` of 20th November.l945)” (Justice Munir’s Report, 1954)

This anti-Shia conduct of the Maulana Mazhar Ali Azhar shows quite clearly that he was anything but a Shia Muslim. And by uncritically recycling and circulating this trash, Yasser Hamdani and Pak Tea House have exposed their anti-Shia bigotry.

Justice Munir’s Report clearly acknowledges that the parties were required to put in written statements. Thus, there’s a likelihood that Ahrar’s or Mazhar Ali Azhar’s own deceptive statement about his Shia credentials was uncritically narrated in the Report. As a matter of fact, Mazhar Ali Azhar was a bigoted Deobandi who was as venomous against Shia Muslims as are modern day Deobandi Taliban (TTP) and Sipah-e-Sahaba (ASWJ) clerics. There is a possibility that he may be previously a Shia before his radicalization and conversion to Deobandism at the hands of Ahrari clerics. But that doesn’t diminish or hide the fact that his hateful speeches and actions against Shias, Ahmadis and Muhammad Ali Jinnah had nothing to do with Shia sect and ideology. This important fact was conveniently ignored by Yasser Latif Hamdani which shows his Shia phobia.

Readers may recall that the Majlis-e-Ahrar-e-Islam, also known in short as Ahrar, was a sectarian Deobandi political party in the Indian subcontinent during the British Raj founded in 1929 at Lahore. The party was founded by Deobandi hate clerics including Syed Ata Ullah Shah Bukhari, Habib-ur-Rehman Ludhianvi, Mazhar Ali Azhar etc. Much before its participation in the anti-Ahmadiyya movement in 1950s, the Ahrar was responsible for acts of hatred and violence against Shia Muslims in the name of the Madh-e-Sahaba movement. The party actively opposed Shia Muslims calling them as Rafizis (a derogatory term for Shias), and was also associated with sectarian propaganda against Muhammad Ali Jinnah (a Shia Muslim), the founder of Pakistan.

In his recycled blog post on PTH, Yasser Hamdani claims that:

(Ahrar) was extremely anti-Ahmadi and was also fighting for “Madh-e-Sahaba” (or the honor of Sahaba) against Shias while its president – another significant point- was a Shia Muslim by the name of Maulana Mazhar Ali Azhar. So it was an Indian Nationalist “Secularist” anti-Ahmadi, anti-Shia, anti-Jinnah Movement led by a Shia Alim!!!! Ironies never cease. I hope my Indian friends are taking note: the Majlis-e-Ahrar was part and parcel of the Quit India Movement launched by the Congress and denounced the Muslim League for not taking part in it. Majlis-e-Ahrar’s greatest propaganda was against Mahomed Ali Jinnah … who they denounced as “Kafir-e-Azam”.” Maulana Mazhar Ali Azhar wrote the famous couplet: “Ik Kafira kay peechay Islam ko chora, Yeh Quaid-e-Azam hai kay Kafir-e-Azam.

Repeatedly Pakistan was described as “Palidistan”, “Kafiristan”, “Paleedistan” and “Khakistan” by the Majlis-e-Ahrar. In 1946…. it’s candidates were soundly defeated by the Muslim League’s candidates. This is when Maulana Mazhar Ali Azhar said “Madhe Sahaba can be a weapon against the League”- an obvious reference to Jinnah’s own background as a Khoja Shia Mahomedan (It is worthwhile to remember that Madhe-Sahaba is very much being used against Pakistan and Sipah-e-Sahaba is a direct result of this line of thinking).

Here Yasser Hamdani has dishonestly tried to hide that Maulana Mazhar Ali Azhar was a hateful Deobandi cleric who represented neither Shia Islam nor Shia Muslims. In fact, he contributed to Shia Phobia by organizing the Madh-e-Sahaba and similar activities aimed at creating hatred against Shia Muslims.

In his article published in daily Pakistan, Mufti Muhammad Asghar Deobandi, based on his conversations with a senior Deobandi cleric Maulana Mujahid-al-Hussaini confirms that Mazhar Ali Azhar had converted to Deobandi sect.

According to another article published in the Pakistan Today:

“The Majlis-e-Ahrar of Ataullah Shah Bukhari and Mazhar Ali Azhar opposed Jinnah because they felt that the Muslim League had too many Ahmadis and Shias in it. Maulana Mazhar Ali Azhar wrote the famous couplet: “Ik Kafira kay peechay Islam ko chora, Yeh Quaid-e-Azam hai kay Kafir-e-Azam”. In 1946… its candidates were soundly defeated by the Muslim League’s candidates. This is when Maulana Azhar said: “Madhe Sahaba can be a weapon against the League” – an obvious reference to Jinnah’s background as a Shia Muslim.”

Molana Azhar Ali was always disowned and despised by the Shia community. He shook hands with Deobandi takfiri fanatics of Ahrar, converted to Deobandi sect, and played a very negative role against Shias and Ahmadis. The Ahrar and Deobandi clerics always made lame claims and excuses about how an ex-Shia had become a prominent leader in Ahrar.

In other words, Mazhar Ali Azhar was as much a representative of Shia Muslims as are Ejaz Haider and Khaliq Hazara representatives of Pakistani Shias today. He was as much a Shia as are Ahmed Ludhyanvi and Ali Sher Haideri. Yasser Latif Hamdani’s next article may be on Sipah-e-Sahaba’s Ali Sher Haideri’s Shia credentials because of his name and how Shias are actually inflicting genocide on themselves. Or he may eulogize the Sunni Hanafi credentials of Mirza Ghulam Ahmad before Mirza Sahib declared himself the Promised Messiah of the Ahmadiyya community.

The Deobandi and Ahrari bigots, cunningly, used to present Mazhar Ali Azhar as a Shia to discredit and insult Shias because of his staunchly anti-Shia ideology and views. Yasser Latif Hamdani’s tactics are not much different.

According to a research by Saima Awan:

“many of those who joined the Ahrar (MAI) were inclined towards the Deobandi school of thought. Although the MAI leaders shared the same doctrinal orientation that emphasised the study of law and of the traditions attributed to the Prophet Muhammad, but they also inherited a reformist ideology, quite opposed to the prevalent popular Muslim beliefs and practices. They kept a distance from other doctrinal groups like the Barelwis, Ahl-i-Hadith and Shias.”

In 1945, the Ahrar attempted to revive the Sunni-Shia controversy and Mazhar Ali Azhar Deobandi and his son Mustafa Qaisar left Lahore for Lucknow on 16th November to re-open the Madah-i-Sahaba agitation.

Ataullah Shah Bukhari Deobandi, the Ameer Majlis-e Ahrar, said he was against Jinnah because he is a Rafzi – they called Shias, Rafzi on the basis of enmity, and no Shia could think of joining Majlis-e Ahrar, but Maulana Mazhar Ali Azhar due to his Shia like name and possibly previous Shia background was paraded to show that Shias support the Deobandi hate group Ahrar and also to show that this man, a fake Shia, said Quaed-e Azam was Kafir-e Azam.

Another evidence of Mazhar Ali Ahzar’s Deobandi takfiri hate ideology is his praise for Muawiya ibn Abu Sufyan, an historical figure hated by Shia Muslims due to his actions and statements against the family of the Propeht (pbuhp). 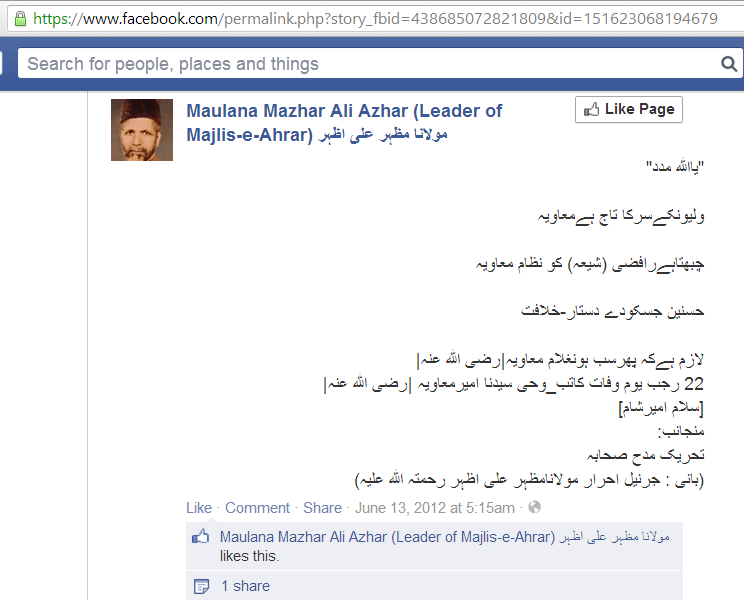 It maybe noteworthy to add that anyone who praises Muawiya ibn Abu Sufyan is either a hate monger or dishonest and sold out to Nasabi interests. Even the pan-Islamist scholar Syed Abul Ala Maudoodi, the founder of Jamat e Islami was clear in condemnation of the crimes of Muawiya, the tyrant king who ended the Rashidun Caliphate.

Perhaps Yasser Hamdani’s next article could be how Shias themselves praise Muawiya ibn Abu Sufyan.

We note that there is a consistent attempt by certain “liberals” to create divisions between persecuted communities eg Shias and Ahmadis, based on false and/or exaggerated charges. For example:

We demand that editors of Pak Tea House (Raza Rumi, Yasser Hamdani) retract their lies about Shias, and offer a clear apology to Pakistan’s Shia Muslims on this callous circulation of the Deobandi/Ahrari propaganda at a time when Shia genocide is taking place at the hands of takfiri Deobandi terrorists.

We have saved the snapshots of Yasser’s article and the original source, which are provided below: 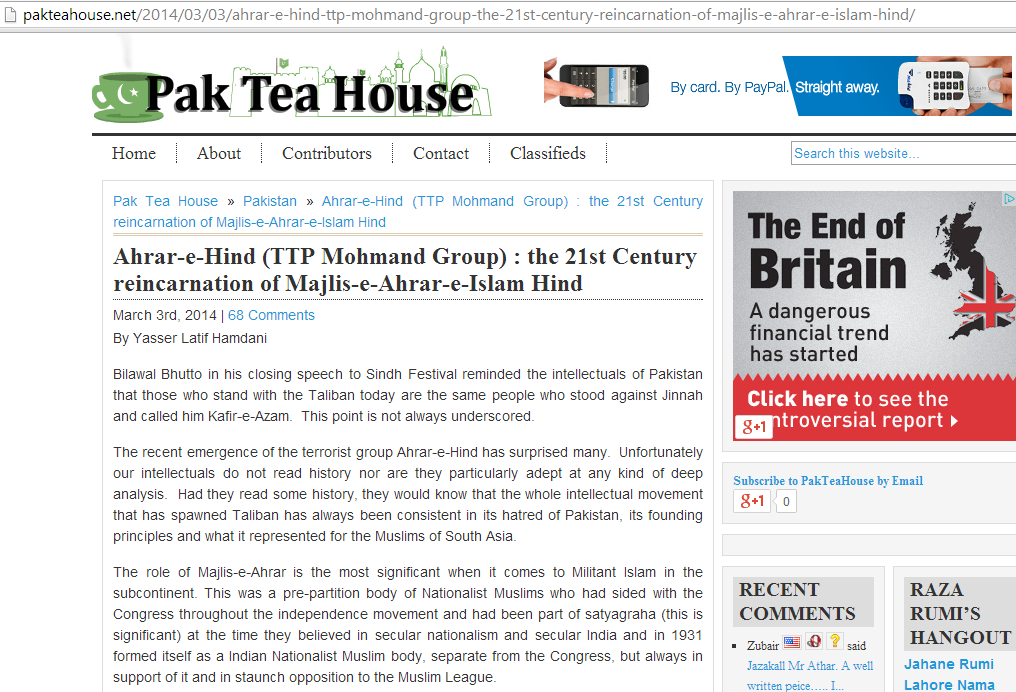 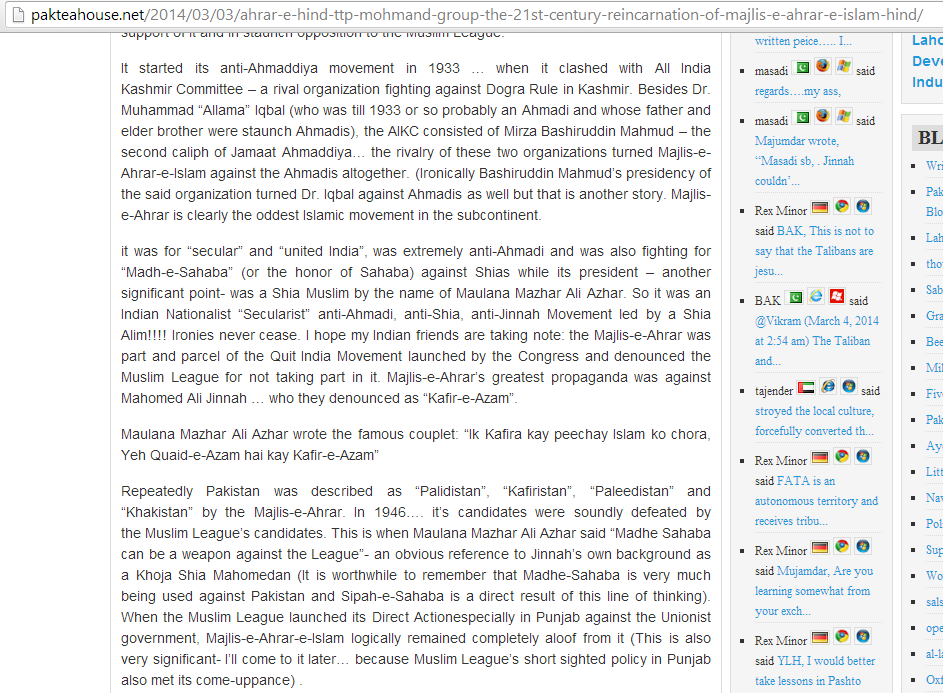 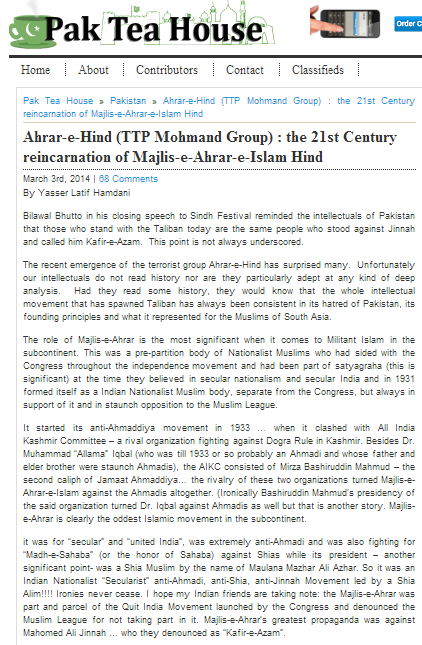 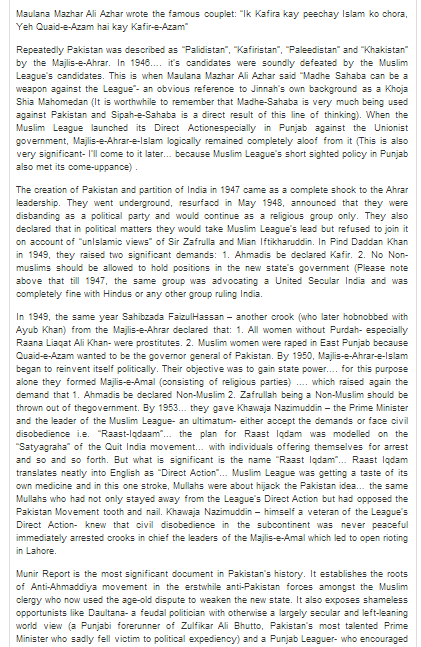 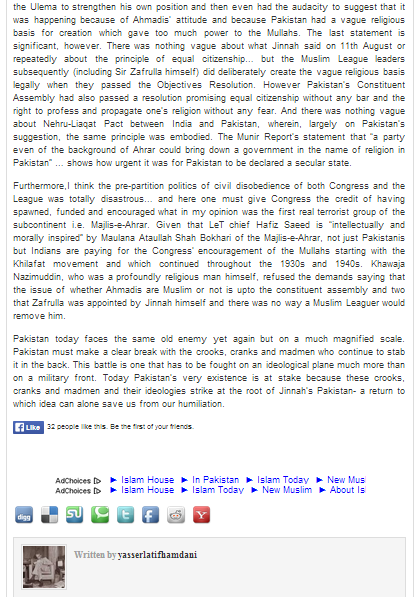 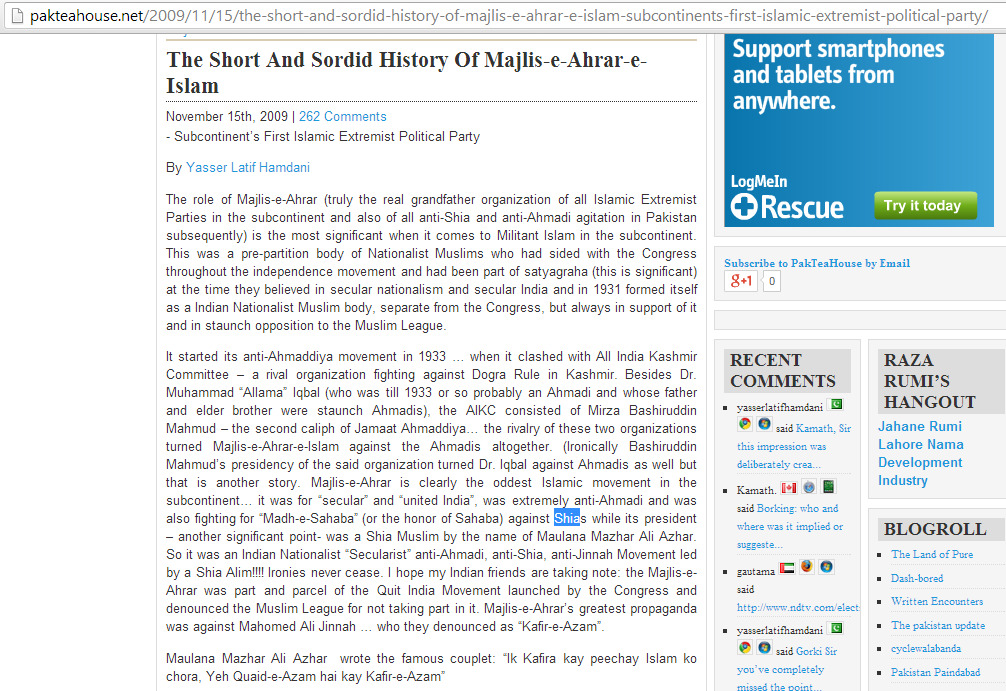 Reaction on Twitter (5 March 2014) and assurance by Yasser Hamdani that he will edit the article in question: 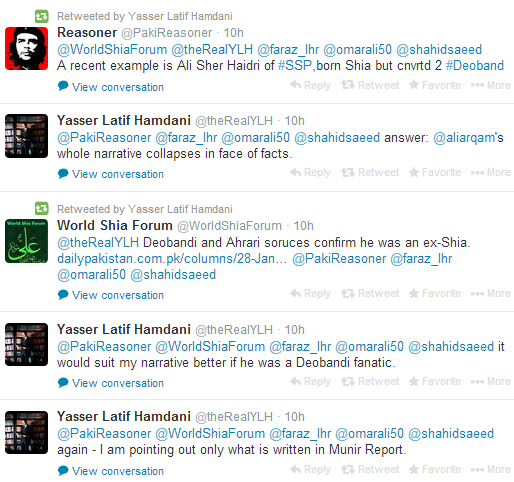 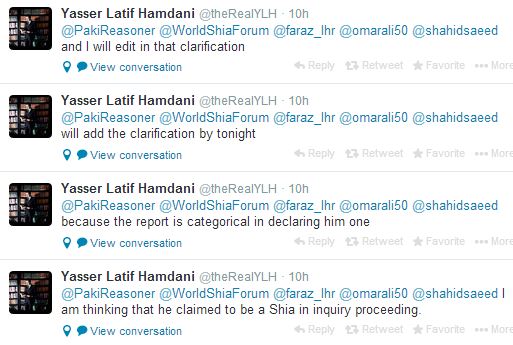 Note: In a previous version of this article, the false propaganda against Shias was erroneously attributed to one Qasim Cheema Deobandi. Now it is established that the source of Shia Phobia was Yasser Latif Hamdani’s own article published on Pak Tea House in November 2009.