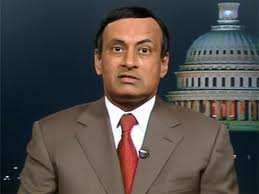 A few days ago, just before Eid-ul-Azha, at least 25 Shia Muslims were systematically massacred by Deobandi ASWJ (Sipah-e-Sahaba) terrorists in at least four bomb attacks across Pakistan, including Quetta, Kohat, Gilgit Baltistan and Parachinar.

However, instead of mentioning the common Deobandi takfiri identity of the ASWJ-SSP, TTP and other terror outfits of shifting names and shared memberships, Pakistan’s mainstream media tried to hide or obfusacate the systematic massacre of Shias and Sunni Sufis by Deobandi terrorists.

Sadly, some Pakistani liberals too seem to be trapped in the same obfuscating or denial discourse by vaious vested interest groups.

For example, on Twitter, former Ambassador Husain Haqqani was seen retweeting and endorsing a Deobandi ASWJ propagandist who claimed that Deobandis are not behind such massacres but then in the nex tweet also asserted that Shias are the enemies of Islam.

Moreoever, Ambassador Haqqani was also seen retweeting and endorsing a paid propagandist of an ethnofascist party HDP notorious for the denial of Shia genocide, removing the Shia identity of vicitms of genocide.

We would like to refer Mr Haqqani to the detailed list of non-Hazara Shia victims of Deobandi terrorism in Quetta, which was compiled by a Shia Hazara activist and published by the LUBP. That list rebuts Saleem Javed HDP’s ethnofascist propaganda aimed at obfuscating Shia genocide. Of course, Saleem Javed HDP hides the fact that in addition to the bomb attack in Quetta, there were at least three other blasts within a span of 48 hours that targetted Shias in Peshawar, Kohat and Gilgit Baltistan, in addition to routine target killings of Shias in Karachi.

While Mr Haqqani retweets and supports ASWJ’s Ijaz Qasmi’s denial of Deobandis’ role in Shia genocide, he may wish to look at the statistical data that suggests that almost all suicide bombers and terrorists identified or/and arrested in Pakistan happen to be Deobandi takfiris. He may refer to LUBP’s post on the Shia Genocide awards in Quetta as well as the video of ASWJ-LeJ’s Aurangzeb Farooqi where he is clear about his intentions with respect to Shias. He may also refer to the Deobandi Madrassa association’s chief cleric Hanif Jalandhari’s recent hate fatwa in which he condemned a Sunni Sufi cleric, his only crime was that he led Eid prayer in which Sunni and Shia Muslims jointly participated. On Husain Haqqani’s part, there is a lack of a clear denunciation of Hanif Jalandhari’s bigotry as well as no mention of the other attacks on Shias by Deobandi terrorists. This in itself is obfuscation.

Ijaz Qasmi’s denial of Deobandis role in terrorism and then asserting that Shias are enemy of Islam in the next tweet itself is a confirmation that there are no moderate Deobandis in Pakistan. This fact, the lack of moderate Deobandi clerics, is also evident by Hanif Jalandhari’s recent hate fatwa against Dr Tahir ul Qadri. 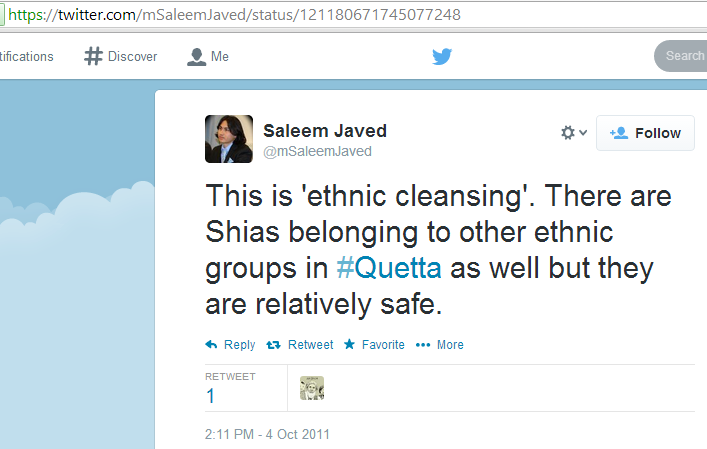 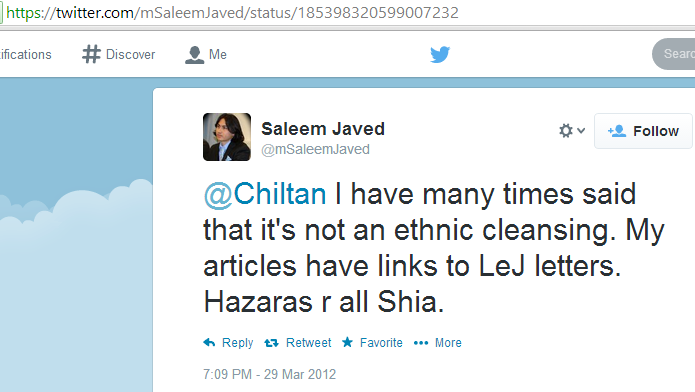 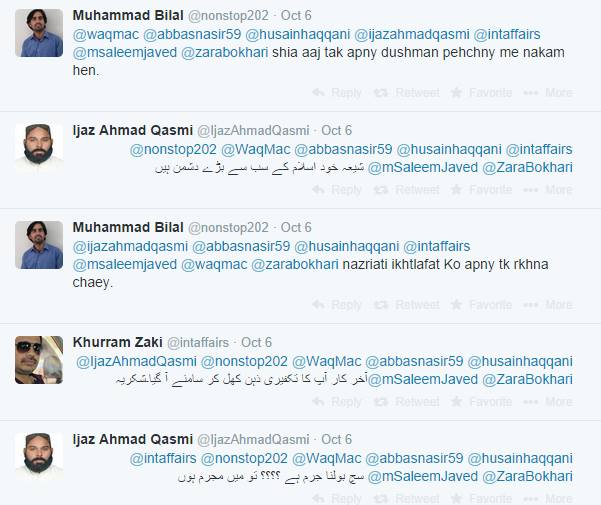 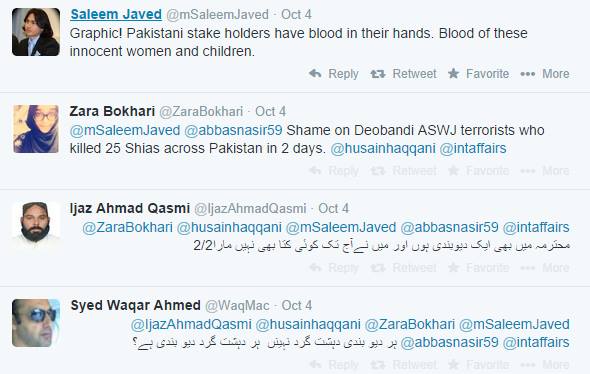 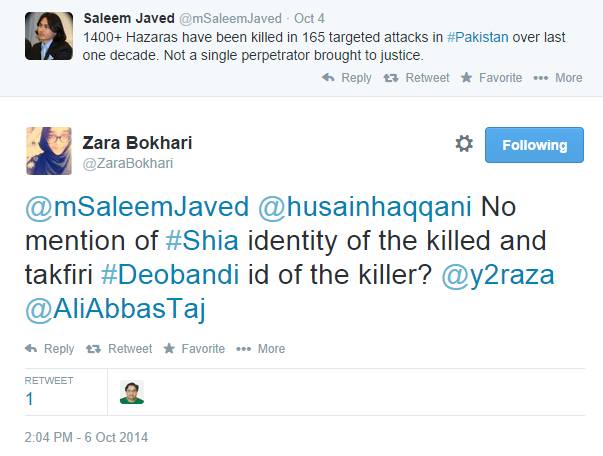