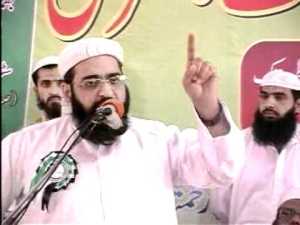 In a typical gesture of ISIS-style intolerance and sectarian bigotry, Pakistan’s top Deobandi cleric Hanif Jalandhari, the General Secretary of the Wafaq ul Madaris Al-Arabia (association of Deobandi madrassas), attacked the mixed Sunni-Shia Eid prayers lead by Sunni cleric Dr. Tahir ul Qadri.  These Eid prayers were an important reminder that in Pakistan, mainstream Sunni and Shia groups co-exist in relative harmony which has made them the combined unfortunate targets of Deobandi terrroist groups like ASWJ-LeJ, Taliban, Jundullah. 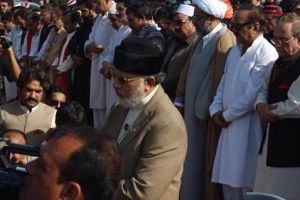 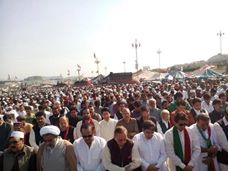 Similarly, while Pakistan’s media and commercial liberals often obfuscate this issue in the false Sunni vs Shia or Saudi vs Iran binaries, the real issue is the intolerance and subsequent violence by Deobandi terrorist groups like ASWJ-LeJ against Pakistan’s peaceful Sunni Barelvi, Sufi, Shia communities along with Christians, Ahmadis, Hindus, Sikhs etc.

Hanif Jalandhari’s bigotted statements against the combined Sunni-Shia Eid prayers lead by Dr. Tahir ul Qadri are based on completely hypocritical reasons. Jalandhari’s stated reason is that since Dr. Qadri suffers from a physical handicap, he is not fit to lead prayers.  One should ask Jalandhari why he never objected to the Grand Mufti of Saudi Arabia who leads the prayers during Hajj.  The Grand Mufti of Saudi Arabia is blind in one eye. 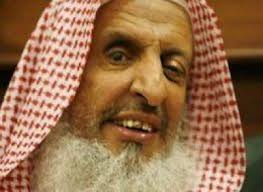 Jalandhari’s bigotry and intolerance cannot be dismissed as a one off.  This is the secretary of the Deobandi network of madrassas, Wafaq ul Madaris, which is based in Pakistan but identifies as Arabia in its title!  Takfiri terrorist groups like the Taliban, ASWJ-LeJ, JeM and Jundullah recruit their militants almost exclusively from Deobandi madrasses.  The Deobandi Taliban have also publically declared their involvement with ISIS.

Hanif Jalandhari and other Deobandi clerics provide a political cover to hate and violence inciting terrorist organizations like ASWJ-LeJ and the Taliban. His most recent statement is not surprising and shows that the Saudi funded Deobandi mosques and madrassas are the incubators of hatred that have lead to the systematic genocide of thousands of Sunni Barelvis, Sufis, Christians, Shias, Ahmadis and Hindus in Pakistan.  Pakistan’s compromised and for hire liberals rarely, if ever, utter a word against them.  On the contrary, most of them are aligned against Dr. Tahir ul Qadri who is the subject of their constant jokes and abuses.

Many Pakistani (fake) liberals (some of whom are allegedly working for foreign imperialists agencies) wrote voluminous hate columns, full of bizarre conspiracy theories against Dr. Tahir ul Qadri. The Najam Sethis, the Nadeem Parachas, the Mosharaf Zaidis, the Nusrat Javeeds have not given Dr. Tahir ul Qadri the credit for uniting Sunni Barelvis, Shias, Christians, Sikhs and Sufis under one platform in his movement against the pro Taliban PM Nawaz Sharif government. They and their kind find it easy to take petty digs (London walla Baba, Tahir ul Padri etc) against anti-Taliban Sunni leaders like Dr. Tahir ul Qadri.

Rarely, if ever, have they written anything that is a clear and specific denunciation of Deobandi terrorists and their political advocates like Hanif Jalandhari, Tahir Ashrafi, Mufti Naeem, Taqi Usmani and other pro-TTP-ISIS monsters in Pakistan. On they contrary, they often lump the victims (Sunnis, Sufis, Shias) and perpetrators (Deobandis) in one category or create a false binary between the two categories.

During the time of the Holy Prophet, some of his Sahaba objected to Hazrat Bilal giving the call to prayer.  Their objection was based on the racist notion that an African could not pronounce the Arabic call to prayer with the correct intonation and pronunciation. Their objections were ignored as petty and racist then just as Hanif Jalandhari, a Deobandi Saudi stooge and Yazid ibn Muawiya apologist, must be ignored now.

Deobandi school of thought needs to weed out these fascist black sheep within them, history will not judge them kindly for fascism and bigotry. The search for the perfect man may equate them to the Nazis who searched and even bred the blond and blue eyed “ubermensch”.