Update: This is the third bomb attack massacre of Shia Muslims in Pakistan in the last 72 hours but not a peep from Pakistan’s pro Taliban kleptocrat Interior Minister, Chaudhary Nisar or PM Nawaz Sharif. Similarly, hardly any notable mention from the so-called secular Pashtun nationalists whose Deobandi sectarian idenity clearly trumps any human rights concerns of the Shia Pashtuns facing genocide at the hands of the Deobandi Taliban-ASWJ alliance.  PTI, which is in government in Khyber Pakhtunkhwa, needs to be condemned.  However, secular Pashtun nationalists always assume the high moral ground when it comes to opposing the Taliban  but where are they on the ongoing Shia genocide of fellow Pashtuns at the hands of the Taliban? Like the rest of Pakistan’s drawing room elite liberals, they also continue to misrepresent Shia Genocide in the dishonest Sunni-Shia or Saudi-Iran proxy war theory.

Two separate buses travelling to Shia majority areas were attacked by Deobandi ASWJ terrorists with bombs yesterday.  Scores of Shias were killed and wounded including women and children.  Their only fault – returning from major urban centers like Peshawar to their homes in Gilgit and Parachinar in Pakistan’s Northern Areas.

The attacks had all the ruthless and bloodthirsty hallmarks of Deobandi terror organizations like ASWJ-LeJ and the Taliban. 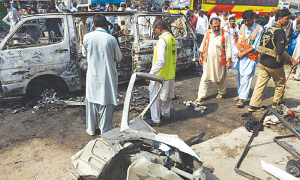 Source: DAWN: PESHAWAR: Security personnel and volunteers inspect the wreckage of the coach destroyed by the blast.—AFP

These attacks have continued unabated in Pakistan and the few arrested suspects have either been let of in jail breaks or by Pakistan’s Pro Taliban judiciary.  The ruling PML N is in an open alliance with ASWJ-LeJ who are the ones committing Sunni, Sufi and Shia genocide in Pakistan. ASWJ-LeJ and other Deobandi terrorist organizations are also linked to ISIS.

Twenty four hours have passed and not a single arrest has been made by either the Federal PML N government or the Provincial PTI government under whose jurisdiction in Peshawar one of the blasts took place.  The typical hollow and vague condemnations have followed which hide both the identity of the victims as well as the perpetrators.

This is what life in Pakistan has been reduced to.  Aside from the odd mention by a few columnists, Shia Genocide has now been accepted as a routine activity.  The ruling PML N does not care, the PPP is spineless, MQM is too faced while PTI is too busy conducting politics to care about the carnage against Shias that is regularly occurring in Khyper Pukhtunkhwa.

As for Pakistan’s (fake) Civil Society and human rights champions, the less said the better. Between misrepresenting Shia Genocide to ignoring it altogether, most have played a negative role.  Pakistan’s premier human rights activist, Asma Jehangir is more passionate about defending her  Pro Taliban client, Nawaz Sharif, than worrying about the plight of Pakistan’s vulnerable and targetted communities who are being targeted by her clients friends and allies. 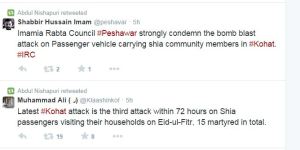 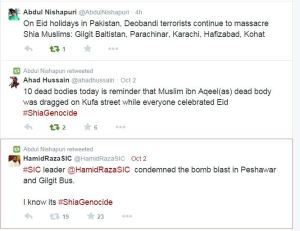