Shias of Pakistan are reeling from sadness and shock as the fourth bomb blast against them took place in the last 72 hours.  This fourth blast took place in a Shia Hazara locality and five people have already lost their lives while twenty others are injured.  The blast location is a crowded market place in Quetta where Shias were buying provisions to commemorate Eid in the next two days.

Shias have been mercilessly targeted all over Pakistan and Quetta, along with Hangu, Dera Ismail Khan, Chilas and Karachi are the areas where the Shia casualties are the highest.  LUBP has done its best to maintain and update a Shia Genocide database.

This is a situation which requires global attention for not just the Shia victims but the Deobandi terrorist perpetrators from interconnected groups like ASWJ-LeJ, Jundullah and the Taliban.  These groups have formally declared their alliance with ISIS (Pakistani Taliban declare allegiance to IS militants)

Here is an example of the blatant dishonesty by Pakistan’s fake liberal elites. 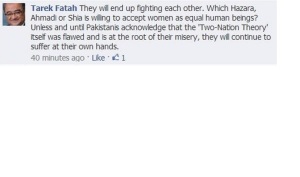 As per Tarek’s perverse reasoning, the Taliban-ASWJ-LeJ that is massacring and targetting Shias and Ahmadis is motivated by anti-Nationalist and Feminist sentiments!

First of all Tarek Fatah sneakily separates Shias and Hazaras into two separate categories and then, in a typical Jamaati tactic, blames the Shia and Ahmadi victims for their own ongoing genocide and persecution. If one were to follow his perverse reasoning, then the Deobandi ASWJ-LeJ terrorists who are targeting Sunnis, Sufis, Shias, Ahmadis, Christians, Sikhs and Hindus are actually Feminists!

This is the same Tarek who is also known as Takfiri Tarek and the Canadian Zarqawi due to his sectarian bigotry against Shias and his takfiri act of apostasizing the Holy Prophet’s beloved uncle Abu Talib – who was also the father of Imam Ali. During the Pro democracy movements in the Shia majority State of Bahrain, Tarek Fatah was a shameless apologist of the Saudi and Pakistan Army mercenary-backed Bahraini monarchy and engaged in the typical sectarian baiting tactics used by Sipah Sahaba aka ASWJ.

From Tarek Fatah to many other influential (fake) liberals from Pakistan, there has been a persistent effort to misrepresent Shia genocide.  The world needs to pay attention to the precarious plight of the different Shia communities in Pakistan and ignore the blatant and insensitive obfuscations of this phenomena.