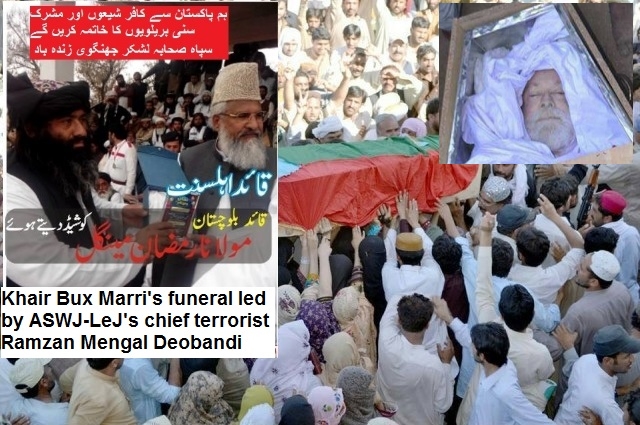 Pakistani media, including Dawn and Daily Times newspapers, have reported the distressing news that the funeral prayer of secular Baloch leader Khair Bakhsh Marri was led by Balochistan’s LeJ chief, Ramzan Mengal. It may be recalled that LeJ (Lashkar-e-Jhangvi, LeJ, currently operating as Ahle Sunnat Wal Jamaat ASWJ) is a proscribed Deobandi terrorist outfit banned by the governments of Pakistan, USA and other countries. ASWJ-LeJ is a Saudi-funded Deobandi terror outfit, supported by certain pro-Deobandi rogue sections within Pakistan army, that has murdered both secular Baloch nationalists and thousands of Sunni Barelvis and Shias all over Pakistan.

LUBP had reported some time back the growing links between secular Baloch nationalists and and Deobandi terrorists supported by the Saudi rogue factions within the ISI. It was clearly stated that such an alliance would be very damaging to the original secular movement of the Baloch nationalists.

LUBP had also stated that how LeJ is being used to target secular Baloch nationalists in addition to their attacks on Shia and Sunni Barelvi pilgrims visiting holy shrines in Iran and Iraq.

The confusion of our times is best reflected in such tragic incidents were a Deobandi terrorist leader is leading the prayers of a veteran, secular Baloch nationalist. This is not the first time that such a thing has happened.

Previously, the funeral prayer of veteran Pashtun nationalist ANP leader, Ajmal Khattak, was led by a pro-Taliban Deobandi cleric, while Maulana Sami ul Haq, a leading supporter and apologist of the Taliban was in the front row. Sami ul Haq’s Deobandi madrassah, Jamia Haqqania Akora Khattak along with other Deobandi madrassas like the infamous Binori Town Madrassa in Karachi, provides the bulk of the Taliban leadership and militants.

Hundreds of ANP workers and leaders have been brutally murdered by the Taliban and yet the funeral prayer of a major ANP leader was led by the God Father of the Taliban. Same pattern was repeated when hunderds of ASWJ-LeJ supported along with hundreds of Baloch nationalists attended the funeral prayer of Khair Bux Marri in Quetta led by Ramzan Mengal of ASWJ-LeJ, the mastermind of Shia genocide and Sunni Barlevli genocide in Balochistan.

Some apologists and denialists have aruged that Changez Marri, the son of late Khair Bux Marri, nominated Ramzan Mengal to lead his father’s funeral prayer. However, that doesn’t explain why thousands of Baloch nationalists did not object to the funeral being led by the same group which is known for conducting massacres of Shias, Sunni Barelvis and secular Baloch nationalists. Similarly when Saudi-rogue ISI-backed Deobandi terrorist Abdul Malik Rigi of Jundullah-ASWJ-LeJ was hanged for masterminding suicide attacks, some Baloch nationalist groups stood in solidarity with Jundullah and ASWJ-LeJ. Other simialr incidents have been previously reported which are very disturbing to say the least.

We stand in solidarity with the secular Baloch and Pahstun causes but that doesn’t mean we should be blind to the disturbing silence of secular groups on the actual identity of the main Deobandi terror outfit namely ASWJ (Sipah-e-Sahaba).

Incidents like this deeply undermine the essentially secular cause of Baloch and Pashtun nationalists. If their leaders and intelligentsia cannot see past the inherent contradictions and dangers of such developments, then it is safe to assume that their secular outlook is less important than their sectarian affinity with an increasingly violent, theocratic Deobandi movement.

Both in Khyber Pakhtunkhwa (KP) and Balochistan, the ASWJ-LeJ and their amorphous form TTP, an interconnected group are actively conducting a genocide against Shias, Sunni Brelvis and Sufis. Hindus, Christains, Zikris, Ahmadis and Sikhs have also been brutally targeted by the same Deobandi groups.

By being silent and not condemning such developments, Baloch and Pashtun nationalists are not only undermining their own cause but also standing with their tormentors.

Instead of introspecting and apologizing to Shias and Sunni Barelvis, some Baloch nationalists and their fake liberal or Deobandi supporters are criticizing those Shias who objected on Ramzan Mengal leading the funeral calling them Iranians, bigoted Shias and Khomeinites. Here’s a sample of their apologia:

2. Mama Qadeer says (according to a Baloch activist) this is a different Ramzan Mengal, not ASWJ’s leader.

3. KB Marri’s deadbody was snatched/hijacked by the State.  (Was it wrapped in independent Balochistan flag by Ramzan Mengal)!

4. We were in deep grief hence we didn’t pay attention that a Deobandi terrorist was leading the funeral prayer.

6. Unless you abuse Khomeini 20 times, Jinnah 30 times, you are a bigoted Shia and you don’t have the right to protest Ramzan Mengal leading KB Marri’s funeral.

7. We are fighting the ASWJ who are ISI’s proxies. (Does that explain why the Balochs have established a working relationship with Jundullah and ASWJ, and why a province-wide strike call was issued by the Balochs to protest the execution of anti-Shia terrorist Abdul Malik Rigi? What about other numerous reports and instances in which ASWJ and Balochs have jointly mourned the murder of an ASWJ leader?)