Geo TV has always been a subtle promoter of the Takfiri Deobandis. It has persistently been promoting those criminals who have been supervising the Shia genocide in Pakistan. These criminals include Mullah Ludhyanvi and Aurengzeb Farooqi. Geo has persistently been trying to demonize LUBP. Five years ago, Hamid Mir in his talk show claimed that LUBP was beng operated from the President House, i.e., former president Zardari was financing LUBP. Recently, Najam Sethi tried to pit the PTI against LUBP by claiming that it is the LUBP web site that has been trying to incriminate Imran Khan by questioning his loyalty to the people of Pakistan.

LUBP stands for the rights of minorities, those minorities which are being decimated by Geo-promoted terrorists. And yet we the LUBP editors want Geo to continue to operate. We oppose all attempts by the ISI and its lackeys to close it down. We still condemn, and we will continue to condemn, Geo for its promotion of Deobandi terrorists. We also hope that Geo will learn a lesson out of its current state of siege.

Here you can see Geo anchor Hamid Mir devote an entire program in propagating a complete lie that LUBP a small independent all volunteer voice is a traitor https://lubpak.com/archives/1593. Now the shoe is on the other foot. 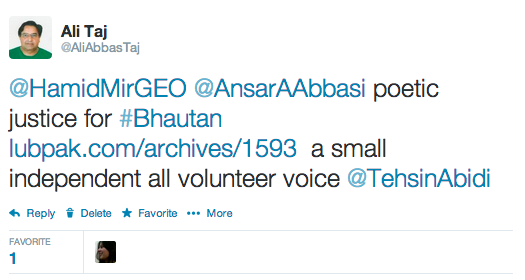 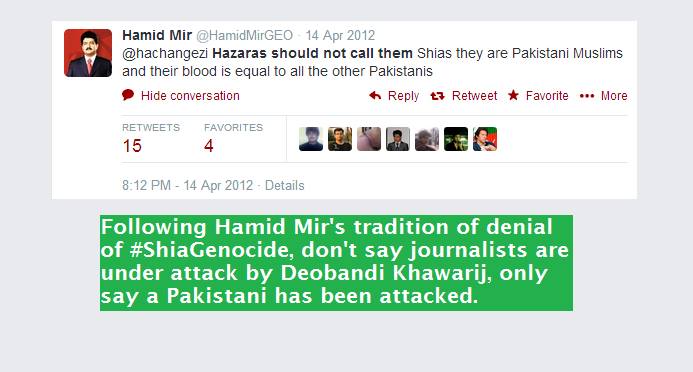 Media reports suggest that five private members of Pamra convened an emergency session and suspended or revoked licenses for three of the Geo channels and ordered the sealing of their offices. Announcement was made by Israr Abbassi, Mian Shams and Fareeha Iftikhar – in front of Pamra headquarters earlier today.

“All members (present) today unanimously decided that the licence for Geo News be cancelled. However, due to a legal formality that could not be completed, we have sent our recommendations to the Council of Complaints, advising that they respond before May 28, the date for our next meeting,” said Mian Shamsur Rehman, a member of the committee.

The suspension is to stay in effect until May 28, when another session of the committee will be called to decide on the final decision regarding cancellation of the licences, they said.

Speaking to a private TV channel, Abbasi added that in the next meeting the legal process against Geo would be decided upon, and until then, the group’s licenses will remain suspended. He said that there was no need to refer this decision to the law division as Pemra has been given the authority to take such a decision.

Pamra spokes person declared the session and announcement null and void “since it was not called officially in spirit of Rule 3(4) of Pemra Rules 2009.”

LUBP has always advocated freedom of speech and freedom of press. We are disappointed to see that the state within the state is blatantly abusing media. The truth is that Geo and all other media outlets work for ISI and have done so since their inception. The real beef of ISI with Geo is the portraying of the head of ISI as attempted murder suspect in the case of Hamid Mir. The image of the armed forces and ISI is very important to maintain control. This image was being damaged by Hamid Mir taking a conciliatory tone towards Mama Qadeer and missing persons of Baluchistan. The annoyance of ISI with Geo is partly justified.  Geo had been quiet on Shia Genocide, attacks on Sunni Brelvi and atrocities against Baloch and minorities by Deobandi Taliban of Sipah Shabah and Lasker e Jhangvi, in service to their ISI masters. Now all of a sudden they were being slightly independent, but the state within the state needs complete and abslolute obidience of the media.

It should be noted that Hamid Mir and Geo were not taking this stand based on principles. In our article the farce of calling Nawaz Sharif anti-establishment we have explained that Nawaz Sharif and his cronies are only pro money, not anti- establishment for a better Pakistan. Their collusion with Geo in taking ISI and Army down a notch stems from  greed and accumulation of more money not national interest. They are doing so at a very bad time when the nation needs to focus on eliminating Deoabandi Taliban of Sipah Sahaba and Lashkar e Jahngvi and terrorism from Pakistan. Instead of cooperating with the establishment to achieve this difficult challenge Nawaz Sharif and Geo for their own financial interests which are tied to Saudi Arabia and India have decided to peruse a policy of distraction and defamation of the Army.

The Army has been using Deobandi Taliban as their strategic asset not only outside Pakistan but to also to quell nationalist movements within Pakistan. Unfortunetely, the media with Geo in the forefront has been acting as the Army’s executioner in this regard. At this important moment in Pakistan’s history both the Army and the media should have joined hands to destroy the Deobandi networks for the very survival of the country. But what we are seeing is a short-sighted infighting between the Army and teh media. Saudi money has corrupted Pakistan’s various institutions to the core. But in the long run, it will destroy these very institutions. Geo should have aimed at exposing the Deobandi groups such as Ahle Sunnat Wal Jamat and the Taliban instead of involving the Army as the master mind in the assassination attempt on Hamid Mir. By doing so, it has greatly tarnished the reputation of the Army. Whatever the circumstances, it cannot be denied that it is only the Army which can successfully take on the Deobandi terrorist organizations. We expect Geo to change its position and promote the idea that the Army should attack the Deobandi outfits. We expect the Army to learn a vital lesson about the precipice where its own supervision of the Deobandis has put a question mark on its credibility and intention to fight terrorism in Pakistan.

Asma Jahangir and other voices of balance and analyse the ISI versus Hamid Mir of Geo saga.

It is no secret that Saudi Arabia has been recruiting Deobandi terrorists to destroy popular movements in Bahrain and Yemen. Saudi Arabia has also been recruiting Deobandi terrorists to destroy the government of Syria. For this purpose, it has been spending billions of dollars in Pakistan to create acceptance of its Takfir ideology amongst the people of Pakistan. Now that the Army was planning to take on these terrorists, Geo has tried to change the entire scenario by bringing the Army into disrepute so that it cannot act against the terrorists, and Saudi Arabia can have its way. We urge the Army to investigate the Saudi-Geo nexus in the present campaign against it. If this is the case, Geo should be forced to make a public apology and promise to act in the interests of Pakistan, and not Saudi Arabia.

Mir Shakil-ur-Rehman’s (MSR) love of money is so intense that he has not even paid billions ofrupees he owes to the government of Pakistan. The first thing the government can do is force him to pay the taxes due. Najam Sethi can also be investigated for the same reason. Follow the money trail for the answers and motivations.