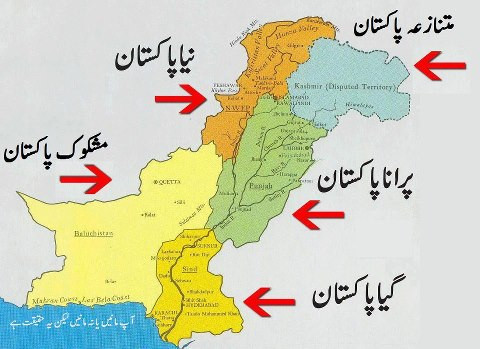 Editor’s note: LUBP does not support this opinion. However, we want to encourage candid debate on these issues. After the sad demise of Shaheed Mohtarma Benzair Bhutto, the “zanjeer” of the provinces is gone. Smaller provinces have genuine fears of a “Punjabi Dictatorship” under Nawaz Sharif.

This is just my personal opinion ,I have often thought about the fact that how Pakistan has suffered because of Punjab .My conclusion is based on the following facts .

If we go back in history , no province has created more misery then Punjab in all the other provinces:

Take the example of many wars fought in the name of Kashmir starting in 1948,why do I as a sindhi or a balochi has to worry about Kashmir when I have my own survival issues in my own homeland .

Next is the demise of east Pakistan where I do believe Punjab was never happy to see a Bengali run a country hence the tragedy of Bengal or east Pakistan where the so called pak army, and yes please save me the fact that Z A Bhutto was culprit since nothing happens in OUR Pak LAND WITHOUT GHQ,hand TO THIS DAY !!!
And yes again most of it from Punjab or under Punjabi generals slaughtered with gusto the helpless Bengali population .

Punjab as a province also takes a distinction in the fact that it is the only province to send three elected prime ministers in body bags to their home .

It continues to drain the whole nation of its resources to pay for its army is also one of the biggest landlords in Pakistan .In no other country you will see army owning so much private land for its soldiers who again hail from Punjab.

Punjab also has the distinction of the birth place of Shia -Sunni violence, killing of Christians , discrimination against ahamadiyya muslims and faith based persecution of minorities.
JUST THINK ABOUT IT BEFORE WE HAD NEVER HEARD OF THESE ISSUES ,WHY SHOULD WE HAVE TO PAY FOR THEIR FOLLIES. Southern Punjab is especially responsible for exporting to Sindh and Baluchistan the Takfiri Deobandi Millitant tendencies by Sipah Sahaba Taliban of ASWJ/LEJ thanks to Saudi and UAE patronage. Southern Punjabi Taliban have become the political face of the TTP and influence Punjabi politicians.

Why we the rest of Pakistan have to suffer for this?

In my opinion it is time that we should let them be , I am sure we all the other provinces can do much better.