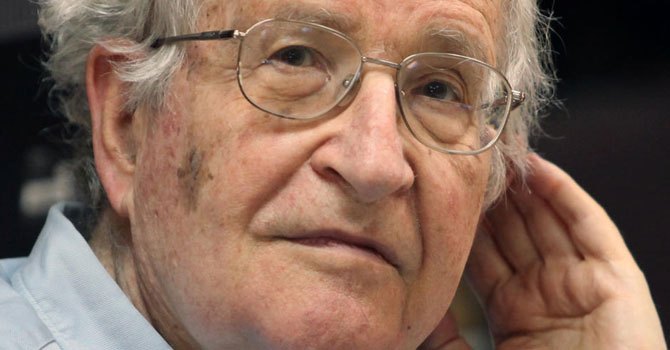 In an interview published in the backdrop of Pakistan’s forthcoming elections, only a couple of days away now (11 May 2013), the great political thinker of these times Noam Chomsky has not shown much optimism about the outcome of the election results if the Punjabi Islamist mafia led by Nawaz Sharif wins.

First, he says that Pakistan is not one country. He points out the deprivation of the provinces of Baluchistan and Sindh because there is a general feeling that “they are not part of the decision-making process in Pakistan.

Why is this so?

In Professor Chomsky’s words, all decisions are made by a “Punjabi dictatorship”. There has been an exploitation of the resources of Baluchistan while the Baloch people themselves are not beneficiaries of their own natural resources. This is why, the non-Punjabis regard Pakistan as a Punjabi state, and not a part of the Pakistan federation.

But his greatest disappointment is with Nawaz Sharif. To a question about the possible electoral success of Nawaz Sharif, Chomsky said, “Well, we have a record for Nawaz Sharif but not the others. And judging by the record, it’s pretty hard to be optimistic. His [Sharif’s] previous governments were very corrupt and regressive in the policies pursued.”

This says it all. In Chomsky’s assessment, despite all these years, Nawaz Sharif has not learned anything.

If you look at what he has been saying at the rallies, it is clear that he is desperate to become prime minister at all costs. He has been making false claims about his successes in the past, and making impossible promises for future. But he is incapable of doing anything constructive. The man who receives his orders from the House of Saud cannot be a friend to Pakistan and its people. He has shown his unhappiness over the Iran-Pakistan gas pipeline just to please his Saudi masters.

But it appears that the reactionary Punjabi institutions like the Army and the Judiciary are hell-bent to make him succeed. And the super-reactionary House of Saud is also dong the same. If God forbid he succeeds, Pakistan will be thrown back in every way. The people of Pakistan should take note, and use their votes to keep him away from making mess of the country just like he did during his two previous tenures.