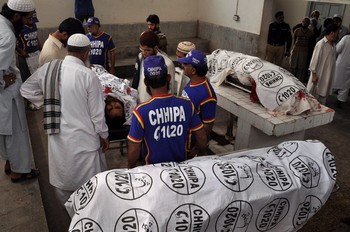 Update: Only within 24 hours of Ali Chishti’s incitement to violence against Shias, at least 25 Shias were killed by Takfiri Deobandi militants of Sipah Sahaba (ASWJ-LeJ) in Hangu, Khyber Pakhtunkhwa.

A senior Deobandi cleric from a high profile Muslim seminary in Karachi Pakistan was killed today. We condemn his brutal murder by terrorists. Abdul Majeed Deenpuri Deobandi, 60, and two others were shot dead on Thursday when a gunman opened fire on their car. He was a leading figure of a Deobandi Muslim institution, the Jamia Banuri Uloom Islamia. CCTV footage shows that Mr Deenpuri, another cleric Mohammad Saleh, and the car’s driver were killed by a gunman who was waiting near the eastern Nursery neighborhood  police quoted by the AFP news agency say. “When the car slowed down near a traffic intersection, he opened fire to stop it and then attacked them at close range,” a senior police official who did not want to be named told AFP.

The murder of Maulana Deenpuri Deobandi appears to be the latest in the ongoing series of murder of moderate Deobandi and other Sunni clerics by Takfiri Deobandi militants of Lashkar-e-Jhangvi (aka ASWJ) and Taliban.

Maulana Abdul Majeed Deenpuri was head of Darul Ifta Jamia Binori Town Jamshed Road, Karachi. He was apolitical, not affiliated to any party. It should be noted that Jamia Binori Town was criticised by ASWJ-SSP leadership, pamphlets published against it when Shia scholar Allama Turabi addressed there. During the days of MMA Allama Hasan Turabi addressed a gathering inside Binori Town mosque, a few days later he was killed by ASWJ-LeJ militants in a Suicide attack.

The Deobandi Ulemas killed today have nothing to do with ASWJ-SSP, they were apolitical. Jamia Binori Town was centre of MMA activities and hosted their jalsas. JUIF organised MMA meeting in Binori Town where late Allama Hasan Turabi addressed, ASWJ-SSP Takfiri students published pamphlets against it

Jamia #Binori Town has a centre stage in #Jihadis and sectarian organisations, #Taliban doesn’t need to control them. Jamia Banoria and its principal Mufti Naeem are interested in business, making money through land grabbings and Mudariba companies. Another Double Shah in the making at the outskirts of Jamia Banoria, SITE, Karachi, Muzariba companies offering 106% profit per annum, Rs.9000 pm.

TV channels & media persons do not differentiate between Jamia Binoria, SITE, Karachi owned by Mufti Naeem and Jamia Binori Town, GuruMandar. Ulemas of Jamia Binori Town killed today had no political affiliation, that is why they had no security guards or Police protection the way ASWJ-LeJ leaders have. The bid is to strengthen the influence of ASWJ-LeJ in Madrassahs where relatively moderate JUIF has strong influence in Karachi. JUIF is political player in Karachi and enjoys support in Pashtuns areas, JUIF Jalsa last year was bigger and greater than PTI and DPC-ASWJ jalsas (courtesy: AA – Twitter)

Immediately after the targeted killing of three moderate Sunni religious scholars who were opposed to terrorist activities by the Taliban and Lashkar-e-Jhangvi, Pakistan’s prominent “liberal” (in fact a fake liberal blogger who is hiding in Pakistani liberals’ ranks) social media activist, Ali Chishti engaged in obfuscations. This is a typical characteristic of Pakistan’s urban elite.

Ali Chishti’s (himself a Deobandi) tweets are trying to create the false impression that this was a tit-for-tat killing and without any proof, Ali Chishti has already blamed the Shias, Pakistan’s most target killed faith group (more than 21,000 dead already). This is very alarming and should be countered by non-establishment liberals and social media activists.

By saying that this is a tit-for-tat killing, Ali Chishti is misrepresenting the ongoing Shia Genocide as a sectarian conflict between Sunni and Shia which it is not. Taliban-ASWJ-LeJ activists and militants do not represent ALL Sunni Muslims, nor do they represent All Deobandi Sunnis. This is creating a false symmetry as the overwhelming majority of terrorist acts are committed by the nexus of Taliban and Lashkar-e-Jhangvi or Ahle Sunnat Wal Jammat – the same organization which is in frequent contact with Ali Chishti and certain other urban liberals. The victims of Takfiri terrorists include Shias as well as Sunnis and other minorities and all of them are being targeted by TTP-LeJ.

What Ali K. Chishti has conveniently left out is the fact that these clerics were opposed to the indiscriminate terror tactics of TTP-LeJ and thus Shias or Sunni Barelvi groups had to no motive to kill these moderate Deobandis.

The current obfuscation is consistent with the previous pattern of Ali Chishti. See this post: https://lubpak.com/archives/234917

To understand the hypocrisy of these “liberals”, please see how Ali K. Chishti supports the expansion of the Blasphemy Law where he is advocating the same thing as Lashkar-e-Jhangvi Taliban. https://lubpak.com/archives/231304

This pattern is consistent with pseudo-liberals’ subtle support for ASWJ chief Maulana Ahmed Ludhianvi on Pakistan’s media. Another disturbing element is that AKC’s friends on social media have been hounding Shia and Sunni activists opposed to the Taliban (like PejaMistri, Darveshh, ZainabBinteAli etc) and have harassed and threatened them to stop their activism.

If anyone has any doubts about the implicit understanding between these pro establishment “liberal activists” and Pakistan’s Taliban-LeJ alliance, please see the support given to these activists by the Ulma Deoband, the hate facebook page that supports all these groups. This is also part of an established pattern by militant Takfiri Deobandi Militant groups and their supporters in social media to create a rift between Pakistan’s Sunni and Shia population by using sweeping generalizations and diversionary tactics.