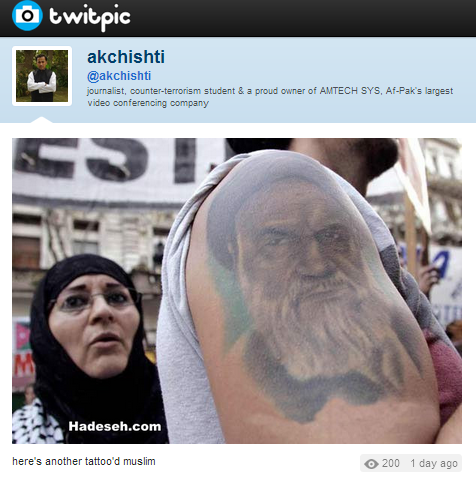 Pakistani “liberal” blogger, Ali K. Chishti, a known agency propagandist, an affiliate of the dubious Jinnah Institute and Najam Sethi’s The Friday Times, has been clearly tasked by his masters in Aabpara to deflect public attention from the real identity of the Takfiri Deobandi terrorists – who attacked the Peshawar Airport and PAF Base a few days ago – to a community which is already facing genocide in Pakistan, i.e., Shia Muslims.

A few weeks ago, Ali Chishti was found promoting Ahmed Ludhianvi , head of Takfiri Deobandi terrorist organisation Sipah Sahaba Taliban, as a prophet of peace. https://lubpak.com/archives/231304 Ali Chishti also proposed that Shia Muslims should be punished because they do not accept the first three Sunni Caliphs as legitimate successors of the Prophet Muhammad (PBUH). Ali Chishti agrees with and promotes an aggresive expansion of the notorious Blasphemy Laws to suppress and silence any criticism of Caliph Yazeed Bin Muawiya, the  murderer of Imam Hussain, Prophet Muhammad (PBUH).  Aside from murdering the Holy Prophet’s family at Karbala, Yazeed Bin Muawiya’s army attacked and defiled the Kaaba and Masjid-e-Nabawi.   Ali Chishti openly suuports Al Qaeda affiliate Ahmed Ludhianvi that the Shan-e-Sahaba Law (Blasphemy of the Companions of the Prophet) be applied on Shia Muslims. (Ironically both of them did not explain why such law should not be applied to Muawiya (son of Abu Sufyan) who killed many noble Companions of the holy Prophet and also started the evil practice of cursing Hazrat Ali in the Friday sermons in the Islamic State.)

Today, Ali Chishti was found circulating a (dubious) picture of an Iranian Shia with a tattoo of Ayatollah Khomeini on his arm. Very soon afterwards, many Deobandi propagandists of the Sipah Sahaba and Taliban were seen circulating the same picture in an attempt to prove that Shia Muslims, not Deobandi militants, are behind terrorist attacks in Pakistan. 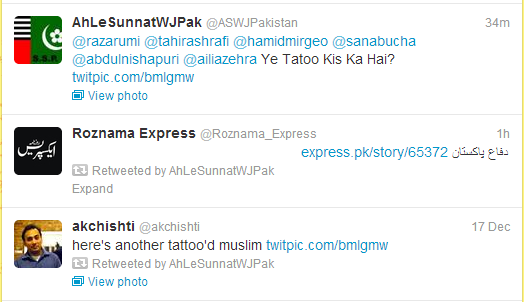 Of course, both Ali Chishti Deobandi and Ahmed Ludhianvi Deobandi (ASWJ) want to hide that:

1. Deobandi militants of the Sipah Sahaba Taliban are responsible for almost all terrorist activities in Pakistan;

2. This is not the first time a Deobandi terrorist with a tattoo has been captured. Previously in June 2009, a Deobandi Taliban fighter was found in Afghanistan with Aston Villa tattoo http://www.telegraph.co.uk/news/worldnews/asia/afghanistan/5538176/Taliban-fighter-found-with-Aston-Villa-tattoo.html

3. Only one of the ten Deobandi attackers killed by Pakistan police/army in the Pewhawar attack had a tattoo on his body. According to experts, the tattoo looks 10 to 12 years old. The outlines, curves and shading clearly tell that it has not been made by an expert. The outlawed Tehreek-e-Taliban Pakistan (TTP), which claims that it is fighting for the enforcement of Islamic shariah, has already claimed responsibility for the attack. It shows that Deobandi and Salafist militants who conduct acts of terror in Pakistan, Afghanistan and other countries worship Yazid, an evil character in Islamic history who killed Imam Hussain, the grand son of the Propeht Muhammad. According to a religious decree (fatwa) by the Darul Uloom Deoband, the most eminent Deobandi seminary in the entire world, it is permissible to revere Yazid as Leader of the Faithful (Ameer-ul-Momineen) and Rehmatullah Alah (Blessing of Allah be upon him). https://lubpak.com/archives/231807

4. Several pro-Sipah Sahaba Deobandi mullahs are currently trying to deflect attention from the Deobandi terrorists. Here’s an example from Express Tribune: “Mufti Naeem of Karachi’s Jamia Binoria seminary told The Express Tribune that there was no exception to drawing tattoos in Islam as shariah has clearly imposed restrictions on it.
“Yes, you can offer prayers but Islam does not permit drawing tattoos on bodies and has banned it,” he said.The head of Pakistan Ulema Council Allama Tahir Ashrafi also endorsed the view. “It was astonishing to see the body with a horrible face tattooed on his body. Islam does not allow drawing tattoos,” he added. “This cannot be the body of a Muslim.”

[A practising Muslim is also not allowed to kill innocent people and destroy their property. When will these Deobandi clerics condemn this violence by their own creed once and for all?]

But a security official pointed out that tattoos on the bodies of terrorists exposed the TTP claims that they were fighting for Islam. “We know their (Deobandi militants of the Taliban, Sipah Sahaba) true face. We have raided their dens and even found pornographic films and male potency drugs from there,” he said. (Source)