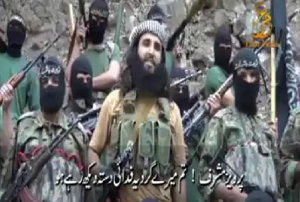 Editorial note:  This piece illustrates how Pakistan’s policy –conceived and underwritten by its Army which runs the national security policy without any input from the democratic governments- of supporting Islamist militants has boomeranged dramatically in its face. Pakistan is now a country under siege by the very jihadists nurtured by elements of Pakistani military to wage ‘jihad’ in Kashmir, control ‘strategic depth’ in Afghanistan, and to launch attacks against rival India.

The same extremism now rebounds home as the jihadists with ambition to take control of Pakistan and its nuclear weapons turn on their handlers. Many of Pakistan Army’s ‘Strategic Assets’ are now up for being used against it by its worst enemies. As the inept governments of PMLN and its predecessors have watched on as the struggle for control of Pakistan –a hugely populated country with the fifth largest nuclear arsenal in the world– intensifies every day.

The outcome is far from certain. The key player, Pakistan Army, still seems dangerously ambivalent about the jihadist Frankenstein it created, willing to combat only those parts of it which have turned on against it. No doubt, Pakistan Army is genuinely at war with parts of the syndicate of jihadist terror it had sponsored.

It has more than 160,000 troops engaged in operations against the militants. Some 35,000 Pakistanis including several thousand soldiers have died in the fighting since 2001. About a hundred of ISI men have died. But, unfortunately, Pakistan Army refuses to let go of its fallacious notions as the ISI is still in bed with other parts of the syndicate like Lashkar e Tayyiba and the Afghan Taliban that fights NATO.

Despite years of all-round complaints, those partnerships are still intact. However, even the friendly terrorists don’t always stay in the lanes the ISI wants them to stay in. For example, both LeT and the Afghan Taliban eulogized bin Laden after his death and mourned his departure. Ideologically these parts of the jihadist syndicate are much closer to their renegade jihadist brethren than to Pakistan Army, which they increasingly see as an American ally. The renegade parts like the TTP and LeJ also often benefit from secret support from some of the rogue individuals, within the ISI and the military, who genuinely espouse the Islamist extremism.

ISLAMABAD: Adnan Rasheed, a former officer of the Pakistan Air Force (PAF), who now heads a lethal fidayeen unit of the Tehrik-e-Taliban Pakistan (TTP), has turned out to be the possible mastermind of the June 8 fidayeen attack at Jinnah Airport in Karachi.

Preliminary investigations into the audacious fidayeen attack have given broad hints that the man at the helm of the bloody raid was Adnan Rasheed, the mastermind of a 2003 assassination attempt on General Pervez Musharraf in Rawalpindi.

Adnan was freed in an unprecedented jailbreak episode on April 15, 2012 when around 200 Taliban militants armed with guns, grenades and rockets attacked the high-security Central Jail of Bannu and released 384 prisoners. TTP spokesman Ehsanullah Ehsan subsequently declared on April 20, 2012 that the operation was mainly aimed at freeing Adnan.

Ehsanullah added that the Taliban had been working on the jailbreak plan for several months and they were in touch with Adnan Rasheed and some other prisoners in the Bannu Central Jail. Interestingly, despite being an al-Qaeda linked convicted terrorist, Adnan was allowed to get married in the jail in 2010 and become father of a daughter. Coming from Chota Lahor village of the Swabi district, Adnan had joined the Pakistan Air Force (PAF) in 1997, before being arrested for his role in an attempt to assassinate Pervez Musharraf in Rawalpindi on December 14, 2003.

He was subsequently awarded death sentence by a Field General Court Martial (FGCM) on October 3, 2005 at Chaklala Base of PAF along with six other Air Force men. However, after being convicted, Adnan was shifted to the Bannu Central Jail from Adiala Jail in Rawalpindi due to inexplicable reasons, only to be freed by the TTP in a jail break operation.

He has already been elevated as the chief operational commander of a lethal fidayeen unit of TTP – Ansarul Aseer or the Helpers of the Prisoners whose stated mission is to secure freedom for imprisoned jehadis by conducting jail break operations.

In a video-taped message released on March 25, 2013, Adnan Rasheed had threatened to assassinate Pervez Musharraf, adding that he has already constituted a death squad which would hunt down the former dictator for having ordered the 2007 Lal Masjid massacre. The TTP has already claimed credit for the Karachi Airport assault, saying it was meant to avenge the November 2013 death of their former ameer Hakeemullah Mehsud in a US drone attack. The fidayeen attack was executed by ten heavily armed Taliban fighters, including some Uzbek nationals belonging to the Islamic Movement of Uzbekistan (IMU), which has become an integral part of the TTP due to the unique guerrilla skills of its militants. All 10 Taliban fighters and other 18 people, including 11 security personnel and four airport workers, were killed during the fighting which lasted for at least six hours.

While Pakistani officials claimed that the Taliban sought to destroy the airplanes at the terminal, TTP spokesman Shahidullah Shahid said the Taliban had planned to hijack the aircrafts and use them for hitting targets at another place. Another TTP leader said the Karachi airport was considered to be one of the most secured installation in the country and the June 8 attack gives a very clear message to the civilian and khaki leadership that no place in Pakistan, no matter how secure it is, was beyond the reach of the Taliban.

“We had included engineers and skilled people in the squad that stormed the airport. They knew how to operate a plane after hijacking it,” the TTP leader claimed. This gives credence to the perspective of the investigating agencies that the airport operation and the hijacking plans were the brain child of Adnan Rasheed, being a former PAF officer. Since his release, he has led several guerrilla operations – the most significant being the July 30 2013 Dera Ismail Khan jail break raid in which 275 most wanted militants were freed.

Ansarul Aseer mostly consists of the fighters belonging to the Tehrik-e-Taliban Pakistan and the Islamic Movement of Uzbekistan.

According to the inquiry report of the Dera Ismail Khan Jail break operation (which was shelved), the raid was akin to having taken over the entire town. The report said that over two dozen TTP militants, accompanied by several more from Uzbekistan and other places, managed to travel all the way from South Waziristan to D.I. Khan. Once there, they set up pickets at 10 strategic locations around the prison, cutting off security and law enforcement personnel’s access to the area. Shockingly, most of these pickets were located not far from the police and military checkpoints. The militants blew the prison’s gates open with rocket-propelled grenades and over the next 45 minutes conducted a methodical search of the cells and barracks, freeing prisoners and even identifying and executing four members of a minority sect. Having done so, they dispersed; some headed back to South Waziristan, others melted into the city.

Almost a month before conducting this raid, Adnan Rasheed had claimed in a rare interview that he was indoctrinated by a covert jehadi group which recruits officers from the three military services and utilises them to wage jehad along with the Taliban. The interview was published in May 2013 issue of an English-language jehadi magazine “Azan” which was launched by the Taliban elements, primarily to cater to the educated Muslims. Adnan claimed in his rare interview that his first jehadi inclination emerged when the Indians were compelled to release Maulana Masood Azhar [after the hijacking of an Indian plane in 2000]. He said he was about to travel to Germany for higher education when the 9/11 attacks took place and his colleagues in the PAF persuaded him to pursue the jehadi path.

Narrating in a first-hand witness account, Adnan Rasheed said he joined a clandestine jehadi group functioning in the Pakistan Air Force under the name Idara Tul Pakistan, or the institution of Pakistan. The group’s mission, according to him, was to recruit jehadis from all three wings of the Pakistani military – Army, Navy and the Air Force. Adnan Rasheed also noted how he was led by senior military officers to believe that the Jaish-e-Mohammad (JeM) founder Maulana Masood Azhar was appointed the ameer of the Pakistani Taliban by Mullah Mohammad Omar, the fugitive ameer of the Afghan Taliban.

Adnan narrated how his boss granted him four months’ leave to get training at a Jaish training camp in Mansehra district of Khyber Pakhtunkhwa and how he finally came to know that Masood Azhar was never appointed the ameer of Pakistani Taliban by Mullah Omar.

“Allah Almighty opened my eyes when the Jaish-e-Muhammad split into two factions – Maulana Masood Azhar’s Khudamul Islam and Haji Abdul Jabbar’s Jamaatul Furqan. It dawned upon me that Masood and Jabbar had been working under the command of an intelligence agency.

So, I went to my ameer of Idara Tul Pakistan, Dr. Y and told him that, “Brother we are wronged! There is no difference between us and the Jaish-e-Muhammad. We are soldiers in uniform and they are soldiers without uniform. Dr. Y told me that the Shura of Idara Tul Pakistan had appointed me ameer for the Pakistan Air Force… We later decided to divide our Idara into three branches – administration, intelligence and combat. The administration branch was to do two jobs – recruitment and fund raising; the intelligence branch was to do espionage while the combat branch was to ‘hit and run’. The Idara strongly suggested that no one in uniform would take part in any mission inside Pakistan; rather it would recruit civilian jehadis for this job and they would be assisted with weapons, money and intelligence”.

“We were joined by seven civilian brothers and one of them was appointed their ameer. In September 2003, in a bid to meet Mullah Mohammad Omar, I, along with the civilian brothers, travelled to South Waziristan to fight in Baghar area of Angoor Adda against the Americans. But when we reached there, the Pakistan Army had already conducted its first operation against the Mujahideen under the command of Major General Faisal Alvi (who was subsequently killed by Commander Ilyas Kashmiri of Brigade 313 in Rawalpindi). Brothers Abdul Rahman (a Canadian national) and Hassan Mehsoon (a Chinese national) were martyred in this operation. While returning to Peshawar, I decided to take a U-Turn against the Pakistan Army to avenge the killing of my jehadi brothers. As I met the ameer of the Idara Tul Pakistan, Dr Y, (May Allah release him), we decided to wage jehad against Pakistan”, Adnan concluded while narrating in detail how he became a jehadi.

Is it fair to throw the humiliating DI Khan jailbreak in the PTI’s lap alone? – by Dr Mohammad Taqi