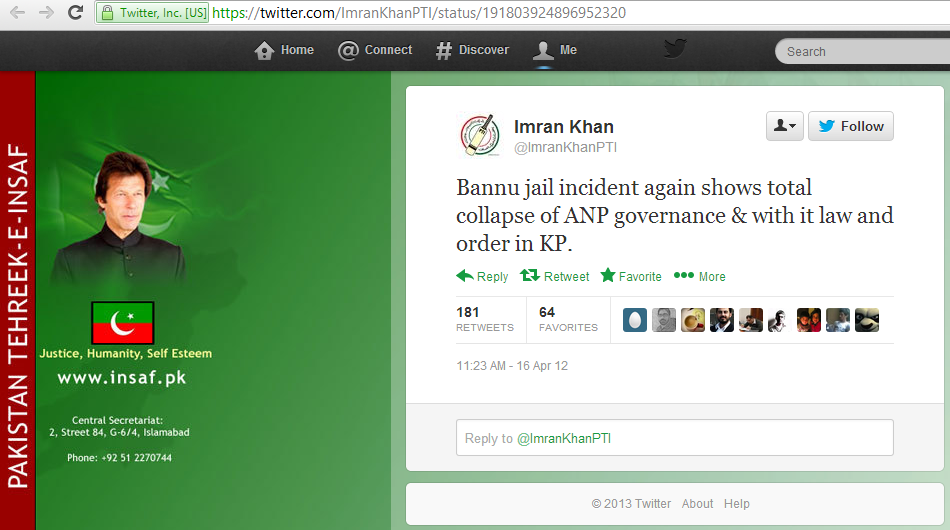 On 29 July 2013, once again Takfiri Deobandi terrorists of Taliban and Sipah Sahaba (ASWJ-LeJ) attacked a prison, this time in D.I.Khan city of Khyber Pakhtunkhwa. More than 150 Deobandi terrorist attacked the D.I.Khan prison and were able to secure release of more than 250 terrorists, many of them belonging to Sipah Sahaba / Lashkar-e-Jhangvi. The only difference this time was that while in April 2012, ANP ruled the province, in July 2013, it was Imran Khan’s PTI that ruled the KP province.

Imran Khan’s reaction to D.I.Khan jailbreak is: “DIKhan jail break has shown the total failure of prev gov’s intel/sec set up. KP will be strengthening police/setting up strong intel immed. KP police in frontline of fire totally exposed with no tech aids or proper intel. Need to have proper provincial intel-security structures.” 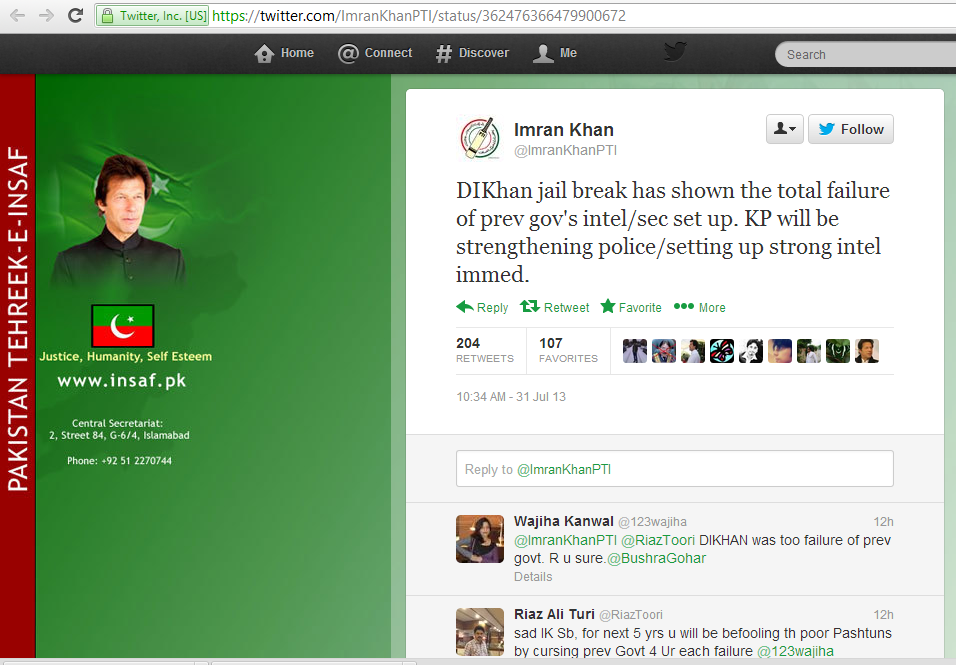 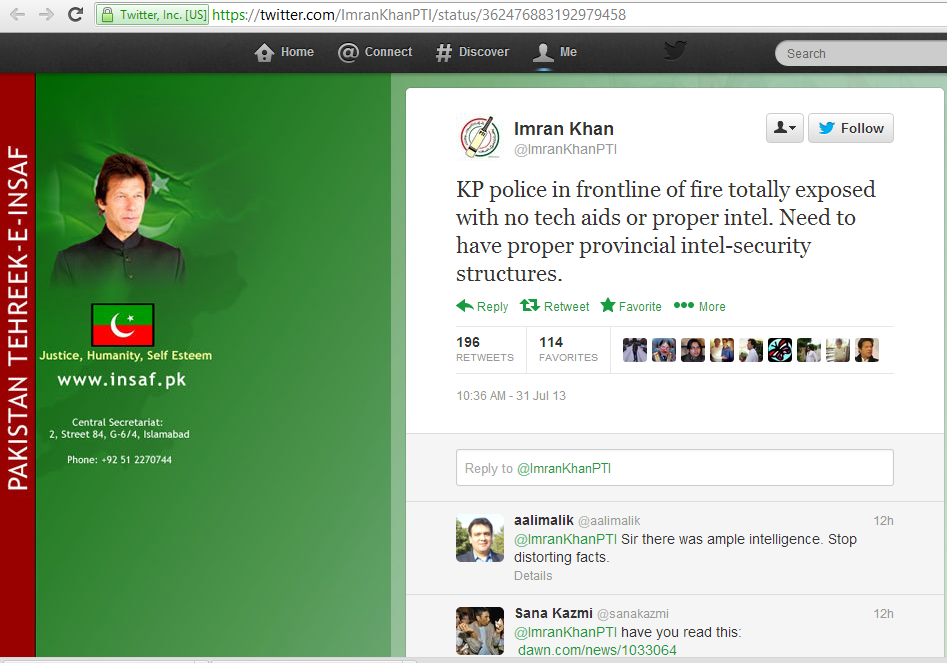 Imran Khan criticized ANP when Bannu jail was attacked. Now he is blaming the Federal government as well as intelligence agenices.

However, this report by Dawn newspaper shows that agencies had informed KPK government about the imminent attack:

Jailbreak: it wasn’t an intelligence failure for once

IF it was for intelligence information, Dera Ismail Khan’s Central Prison debacle should not have happened.

On July 27, a letter marked “secret” and “most immediate” by the country’s intelligence agency addressed to the commissioner, deputy commissioner, deputy inspector general of police, district police officer and the superintendent of Dera Ismail Khan central jail, stated: “It has been reliably learnt that miscreants namely Umer Khitab and his associates affiliated with Gandapur Group/TTP are planning to carry out terrorist attack against Central Jail – Dera Ismail Khan on the pattern similar to Bannu jailbreak in near future. According to information, miscreants are in possession of sketch/map of Jail and have reached in the vicinity of Dera Ismail Khan for this purpose.”

The letter went out the day skirmishes broke out inside the prison between prisoners and guards, which say some security officials, was probably the day the attack could have been launched.

To ensure that the letter reached its destination, properly signed receipts were also obtained from offices of the respective officers mentioned in the letter.

The warning was followed by another demarche to Khyber Pakhtunkhwa the following day, on July 28, from the National Crisis Management Cell, Ministry of Interior, Islamabad. The letter marked “secret” and “most immediate” “Threat Alert 699” said: “It has been learnt through reliable source that Umer Khitab, along with TTP elements, are planning to carry out Bannu jailbreak-like attack on Dera Ismail Khan Central Prison and for this purpose, the group has reached the vicinity of Dera Ismail Khan.”

To reinforce the urgency of the matter further, officers were again warned through text messages on Sunday to take appropriate security measures. As a consequence, civil and military officers visited the prison to work out a security plan. The home secretary followed up on the threat.

On July 29, hours before the most audacious attack on the prison located in the middle of a populated area, the Dera commissioner held a conference of all law-enforcement agencies and the civil administration to discuss the issue.

The intelligence was not merely confined to information about gathering of militants in Dera. The administration was warned that militants would be launching a three-pronged attack from Sabzi Mandi, Girls Degree College and Town Hall where they parked their 14 vehicles.

Also, the administration was told that militants might blow up power transmission line to cause a blackout and they were in possession of night vision goggles.

Additionally, they were told that the convergence of hardcore militants in 12-A Barrack inside the prison was a recipe for disaster and that immediate steps be taken for their dispersal. As it happened, 105 jail guards and 75 men from the Frontier Reserve Police (FRP) were least prepared to forestall the ferocious attack with rocket-propelled grenades, time devices, other explosives and heavy firearms.

The attack took place at around 11.30pm and went on till 2am – three hours with one hour inside the jail compound. The militants equipped with megaphones called out names of their brothers-in-faith and broke open their cells with explosive devices, all the while raising slogans of Allah-o-Akbar and TTP Zindabad. Then they went on a slaughtering spree, beheading four inmates, taking away heads of two of them.

In all, by the last count, 248 prisoners have escaped, among them 30 hardcore militants, including Qari Asif and Khalil, the group involved in bombing in Dera Ismail Khan that had left 25 mourners dead on the ninth and tenth of Muharram last year.

Law-enforcement agencies scrambled and the army was called in but what they found in pitched darkness were bodies of the slain prison guards, slaughtered and beheaded inmates, a strong stench of explosives and smouldering lockups. The hundred or so militants, along with a horde of escaped prisoners, melted away amid the ensuing mayhem and confusion. The incident has thus become the biggest jailbreak in Pakistan’s history.

That no lessons were learnt from the Bannu jailbreak hardly comes as a surprise. Pakistanis as a nation, it appears, never learn from history, but what boggles the mind is that the administration would take its time to prepare for an assault which, it thought would come at a time of their choosing, said one official. They were upstaged by militants.

The irony is, according to a senior official, the civil and military authorities had done mock exercises, assigned specific tasks and roles and worked out a clear standard operating procedure of who was to do what. “On paper everything was worked out meticulously to prepare for both day and night assault. It was a video game played out in real time,” the official said.

What seems more bizarre, the minutes of the meeting presided over by the commissioner were properly recorded. “Everybody had taken the threat alert seriously,” the official said.

Light machinegun-mounted armoured personnel carriers and mobiles of the Elite Police force were deployed and guards deployed on rooftops.

But what happened was even more unbelievable. When the attack came, the mobiles disappeared along with the Elite force which was to stop the assault. The district police officer went to seek help from the brigade commander, but neither showed up. “The gun was there, but there was no one to pull the trigger,” an official said.

There was no breach of wall of the prison. The main gate remains intact and the guard manning the gate told investigators that when he saw the militants blowing up the APC and when they approached the gate and ordered him to open it he had no option but to open it. The militants walked in, made announcements on the megaphones and took away their men.

And to cap it all, the statements of the KP chief minister and his hand-picked Information Minister Shaukat Yousafzai that no intelligence was shared with KP on the Dera jail assault were brazenly misleading and untrue. “We could not have been more specific,” said an angry security official. It was incompetence and lack of preparedness, he said.

The answer to Dera jail debacle was not setting up another intelligence agency within the police at a cost of Rs3 billion, as the PTI chairman said on Tuesday as clearly, the intelligence was there. It was a tactical failure.

The Elite Police which had been assigned the task to guard the prison in view of the intelligence did not respond when the attack came. Neither was this an intelligence failure nor coordination failure. It was a failure of nerves and it all boils down to one stark reality: cowardice. 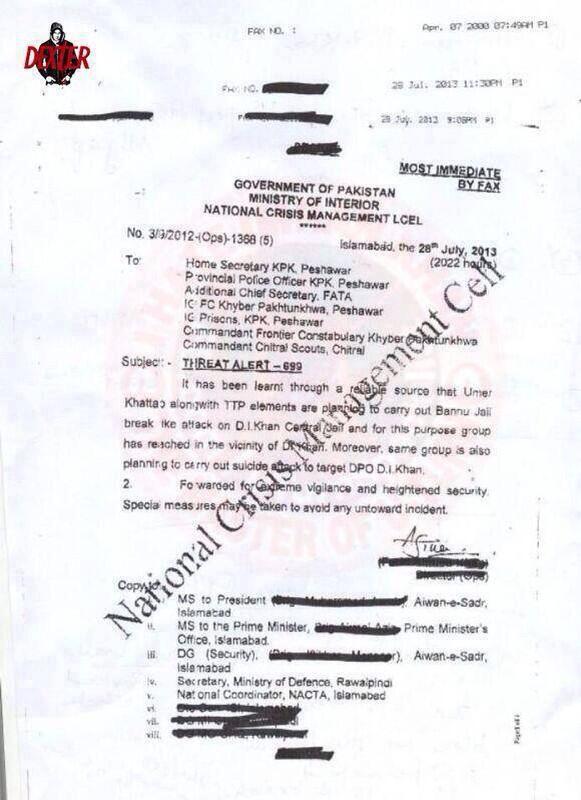