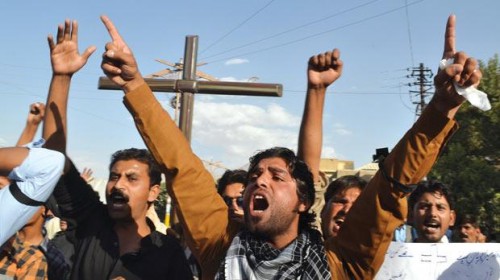 It has been reported in the Express Tribune, that an Okara Christian Church has been vandalized by Okara residents.

This is a vague and almost silly news item of very little journalistic value.  Yes a place of worship has been vandalized, but ExpressTribune makes no attempt at defining who the culprits maybe. Obviously taking the safe route by by refraining from naming the identity of the most likely culprits, the Deobandi Taliban of Punjab. Express Tribune’s policy of making nice with terrorists is well documented by this Guardian article:

Express Tribune is pointed out here but the same is true for entire Pakistani Media, they are complicit with the Deobandi Taliban Terrorists of Sipah Sahaba TTP, LEJ, ASWJ and recycled names like Ahrar. The media are as much to blame for the Genocide of Shia, Sunni Brelvi, Christian and Ahmadiyya at the hands of the Takfiri Deobandi terrorists as the terrorists themselves. The owners and editors of these papers and channels should be tried as accomplices in crimes against humanity.

While the Guardian article points to correspondence by Express Tribune management to ensure safety of the employees. The problem is much deeper. Punjab government, led by Chief Minister Shahbaz Sharif, is known for sympathetic stance towards Taliban and ASWJ-SSP-LeJ terrorists and has been reluctant to take action against Deobandi terrorists and their sanctuaries in Punjab (See more at: https://lubpak.com/archives/291599).  The support and stipends paid of the PMLN custodied public exchequer  for incarcerated Deobandi Terrorists of Sipah Sahaba Taliban is well documented. PMLN’s Electoral involvement with known Terrorists, even nominating hate mongers and murderers to parliament in the last elections is documented.

The ideological and monetary support base for Deobandi Terrrorists is Saudi Arabia. While Prime Minister Nawaz Sharif is from a Sunni brelvi family, his financial interests are tied with the deep Salafi State of Saudi Arabia. He had a choice to make: loose his money or protect the Christians Sunni Brelvi Shia and Ahmadiyya citizens of Pakistan. It is clear what choice he has made.

The Salafist ideology has single-handedly destroyed everything which stands for Islam. Even the Koran has not been spared by the House of Saud. Calling this subversion of the Koran “the Wahabi Koran”, Stephen Schwartz has noted,

This Salafist push to eliminate Christians from Muslim countries is apparent in other parts of the Salafist influenced Muslim world.

The Deobandi (semi Salafi) extremists have become their foot soldiers in Pakistan.