Note by Agha Jafri: These facts and figures, indeed, do not include over 8000 Muslims, Sunni & Shia, who have been massacred just during the year, 2013 by the cruel and criminal agents of Al Qaida (takfiri deobandi salafis), Islamic State of Iraq as well as members of Sufi Nakshbandi order (the neo bathists). Saudi Arabia, though, quite similar to its perilous practice in Syria, is the mastermind behind  this bloody venture. It has been, for the past several years, engaged in fermenting the turmoil and bloodshed in Iraq and in collaboration with the likes of Tariq Al- Hashemi, the fugitive vice president of Iraq, it has made several attempts to topple the democratically elected government of Iraq. Also, joined by Qatar, Kuwait and a few other Gulf states it continues to recruit and finance the most seasoned and brutal domestic as well as foreign fighters for its playgrounds in Syria, Iraq and Lebanon.

BAGHDAD — At least 26 people were killed and 38 others were wounded on Wednesday when a car bomb exploded in a parking lot near St. John’s Roman Catholic Church in a southern neighborhood of Baghdad, according to police and medical officials.

The bomb detonated at the end of Christmas prayers as worshipers were leaving the church in Dora, the officials said.

The victims, most of them Christians, included women and children, as well as a number of police officers posted to guard the church.

A few minutes before the bombing, and barely half a mile away, a series of three other explosions in a market in an Assyrian Christian neighborhood killed 11 people and wounded 22.

Khaled Yacoub, a parishioner at St. John’s, said he had not gone to the church for a long time out of fear, but decided to attend Christmas services with his wife and two children after hearing assurances that he would be safe. “During the Mass, we heard explosions nearby,” he said.

The priest said he would shorten the liturgy so the worshipers could leave early. While taking pictures in the church garden with his children, Mr. Yacoub said, he heard a huge explosion in the parking lot as people were walking to their cars.

“People were running around,” Mr. Yacoub said. “I caught my kids and entered the church. They were crying.” A woman in the church who had been wounded in her legs was asking for help, he said.

He said, weeping: “The priest was talking about peace. He told us that we have to be Iraqi before Christians, and we must love each other.”

His wife, Sahar Yousif, said: “I wasn’t encouraging the Christians to leave the country, but today am rethinking. I do not know who was behind this targeting, but we will not believe the words of brotherhood and peace and coexistence in Iraq anymore.”

Iraqi security forces said they were providing extra security at churches on Christmas and were searching those entering. One police officer stationed near St. John’s said he did not know how the bomb-rigged car made its way into the church parking lot.

Many Christians living in Baghdad and in other provinces traveled in recent days to the Iraqi Kurdistan region to celebrate Christmas and the new year, fearing just this sort of attack.

In other sectarian violence on Wednesday, six Shiite pilgrims were killed and 11 others were wounded when

gunmen attacked their bus on a highway southeast of Baghdad. An improvised explosive device hit Shiite pilgrims north of Baghdad, killing five and wounding 11, according to the police. 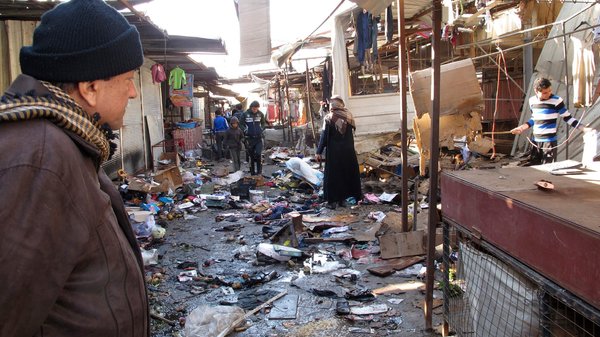 The site of a bomb attack at a Baghdad market, one of a series of attacks in Iraq on Wednesday, some aimed at Christians New York Times