Editor’s note: Only yesterday we published a piece from A Z, praising Malick for his resolve to stand up to the beasts, that are Taliban. And then today we come across this item in one of the most respected names in the history of journalism, which describes how Express Tribune – an opportunistic media group in Pakistan- has surrendered to the whims of the Taliban.

Express Tribune seems to have to forgotten that we must not surrender to the extremists because the terrorists do not represent the aspirations of Pakistanis. Taliban is a renegade and diabolic group that represents no one but themselves. Surrendering a prominent media group’s power of speech to them is akin to selling entire Pakistani media into slavery. Express Tribune has let the nation down in not allowing the message of national resolve go out loud and clear. It is relevant to note that in the last two years, on more than one occasions, Express Tribune removes published news items on PMLN-ASWJ alliance and also on ASWJ terrorism from its pages, under the pressure of PML-N and ASWJ. There is, therefore, a historical pattern of ET’s cowardice and opportunism. 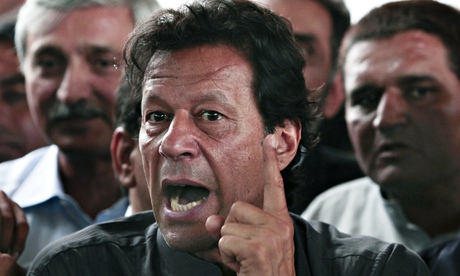 Imran Khan, former cricketer and head of Tehrik-e-Insaf, which is spared criticism because it opposes attacks on the Pakistani Taliban.

When it was launched four years ago, the Express Tribune set out to become the house newspaper of liberal-minded Pakistanis.

A newcomer to a market dominated by conservative-inclined papers, it made a point of writing about everything from the relentless rise of religious extremism to gay rights.

But in recent weeks the paper has been cowed into silence by an unusually blatant display of power by the Pakistani Taliban.

The paper was forced to drastically tone down its coverage last month after three employees of the media group, which includes another newspaper and television channel, were killed in Karachi by men armed with pistols and silencers on 17 January.

The attack was later claimed by the Tehrik-e-Taliban Pakistan (TTP), a large coalition of militant groups, which accused the media group of disseminating anti-Taliban propaganda.

Henceforth there would be “nothing against any militant organisationand its allies like the Jamaat-e-Islami, religious parties and the Tehrik-e-Insaf”, the rightwing party led by Imran Khan, that strongly opposes military operations against the TTP.

There would also be “nothing on condemning any terrorist attack”, “nothing against TTP or its statements” and “no opinion piece/cartoon on terrorism, militancy, the military, military operations, terror attacks”.

Reporters have been banned from describing a movement responsible for the deaths of thousands of civilians, soldiers and police as “outlawed” or “militant”.

The terrorist attacks that rack the country on an almost daily basis are covered on the news pages, but are pared down.

“We do have exclusives, but we don’t run them,” Siddiqi said. “It’s very frustrating at a personal level for all journalists. But we have decided that we won’t do anything at least for the foreseeable future that will come back to haunt us.”

Other changes include a more conservative approach to photographs of female models in the paper’s lifestyle sections and weekend magazine.

Worst affected are the opinion pages. Once-feisty leader writers have almost entirely overlooked the near-continuous attacks that have rocked the country in recent weeks.

Ayesha Siddiqa, a regular columnist, said the muzzling of Pakistan’s media was contributing to an “absolutely mesmerising information deficit” among the public.

“I said to the editor, ‘what am I to do, start writing about cooking or films?’ Because that’s all that’s left.”

The killings followed a bomb and small-arms attack on the company’s offices in Karachi in December. One reporter on the paper said the attacks had terrified many colleagues.

“The paper has an unusually young staff and a lot of the kids were pretty scared, with parents telling them they should quit,” the staff writer said. “There were some people who said we should fight back, but they were a minority.”

After the killings, a TTP spokesman, Ehsanullah Ehsan, was allowed to join by telephone a live discussion programme on the paper’s sister television station, Express News.

He claimed responsibility for the killings, complained the company “was playing the role of propagandist in this war with the Taliban” and said it had ignored regular complaints he had emailed to the channel.

The TV show’s host, Javed Chaudhry, promised that the station and newspaper would take pains to present the TTP’s position “without any trimming”.

“We will have a balanced and impartial attitude towards you and will convey your point of view to the people but we have only one request: that our colleagues should be protected,” he told the TTP spokesman and watching audience.

The TTP has threatened and attacked journalists in the past, including the BBC after its Urdu-language service aired highly critical comment about the Taliban attempt to assassinate the schoolgirl Malala Yousafzai in 2012.

Although much of Pakistan’s national debate is conducted in the country’s generally right-leaning Urdu press and television, the TTP monitors everything.

Ali Dayan Hasan, of Human Rights Watch, said: “The Taliban and other armed groups have threatened the media over their coverage for several years, but now those threats are ratcheting up by accompanying attacks.

“It’s an extremely effective tactic that does far more than just censorship, it also skews the entire national debate.”

Siddiqi, the editor, said he could not risk any more lives.

“The fact is three people have been killed and no one out there is protecting us,” he said, pointing out that no arrests had been made in connection with either of the attacks on the company.

“We are on our own. We have to look out for our own people.”