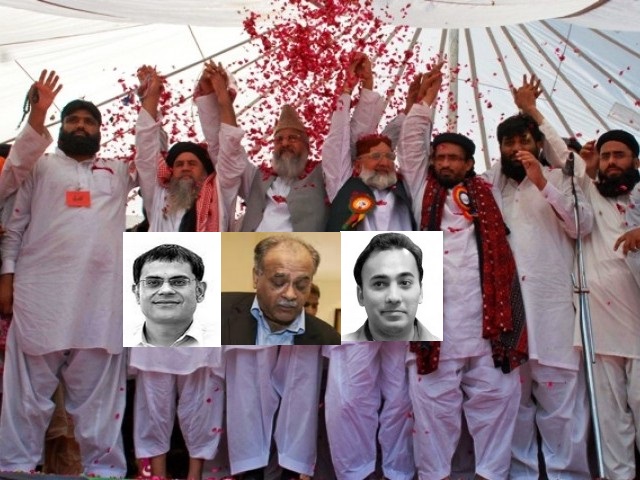 Recently, The Friday Times (owned and edited by Najam Sethi and co-edited by Raza Rumi) published a very distasteful interview with Ahmed Ludhianvi Deobandi, head of banned terrorist group Sipah-e-Sahaba (aka ASWJ-LeJ). In addition to three posts on LUBP, there was also some critical reaction on Twitter by several readers and independent analysts.

For example, these pertinent observations by Dr. Mohammad Taqi:

Important note: Sometimes it’s hard to tell if it was the Taliban or the left-liberal intelligentsia that screwed us over more. Clearly a wolf you can see and take evasive action, a wolf in sheep’s clothing is more dangerous. Najam Sethi claims there is no proof when LeJ (ASWJ) admits to carrying out terror attacks. Najam Sethi is on the same path as rightwing apologists to find an excuse to let the terrorists off the and hate mongers off the hook. In contrast, Mehr Tarar (editor of Daily Times) takes a principled stand that terrorists and hate-speakers must not be provided free, uncritical publicity. It is extremely disappointing that despite self-admissions of carrying out bomb blasts and target killings by ASWJ/LEJ militants, Najam Sethi shows no remorse or apology to the thousands of Shias, Sunnis, Ahmadis, Christians etc that have been killed by footsoldiers of Ahmed Ludhianvi. Instead he is looking for proofs in an environment where all state organs (judiciary, army, media, government) are protecting the killers. Clearly he is supporting those responsible for the Shia genocide, killings of Barelvi Sunni, moderate Deobandi clerics and Christians from Gojra to Joseph colony.

During the exchange on Twitter, Najam Sethi attempted to bait Dr. Taqi as the latter correctly protested the heinous act of TFT publishing a soft ball interview of a proclaimed bigot. Dr. Taqi should have replied that such an interview should have been conducted with Ludhianvi in the Dock and by a Tribunal whose security was guaranteed. Such an option is an impossibility in Pakistan where the Judiciary serves tea and biscuits to Ludhianvi’s lieutenants and overturns the conviction against his vice president, the boastful mass-murderer Malik Ishaq Deobandi!

One aspect that was conveniently ignored by the dishonest discourse of TFT was that Ludhianvi’s ASWJ has not just gone after and caused the death of thousands of Shia Muslims in Pakistan. From the Masih Brothers to Shantinagar to Gojra to Badami Bagh, this Islamofascist terrorist organization has caused the death and destruction of thousands of our Christian brothers and sisters! The same group issues hate fatwas against Pakistan’s Sufi and other Sunni Muslim groups that has lead to multiple attacks on Sufi shrines in Pakistan and lead to the deaths of thousands of Sunnis, Shias and Hindus who visit these shrines to pay respect to the Sufi Saints that preached the love of God and Humanity. From Mandi Bahauddin to Lahore massacre in 2010, ASWJ has lead several murderous attacks on Ahmadiyya Muslims.

Of course, such facts are conveniently brushed aside and not one aspect of this is mentioned in the softball promotion of Ludhianvi by The Friday Times.

One response by Sethi’s protege, Ali Chishti (a pro-Sipah-e-Sahaba columnist in The Friday Times carefully groomed by Sethi-Rumi duo), during the Twitter exchange was both comical and pathetic. AK Chishti called Dr. Taqi “sectarian” for pointing out the obvious. He then defended his support for legislation that would protect Deobandi Caliph Yazid Bin Muawiya from any criticism. Yep, the same Yazid Bin Muawiya who was the murderer of the Holy Prophet’s grandson, Imam Hussain and his family and whose armies attacked the Kaaba and defiled Masjid-e-Nabawi – the two holiest sites for all Muslims. His defense was that such criticism would lead to “hate crimes” – ostensibly against the Deobandi Caliph Yazid. AK Chishti should know that Yazid has been dead for the last 1370 odd years and like his later day counterpart, Osama Bin Laden has an unmarked grave.

(Why we describe Yazid as Deobandi caliph can be understood by the fact that no Muslim sect other than Deobandis and Wahhabis eulogize Yazid. In fact Deobandi Muslims’ largest and most important seminary Darul Uloom Deobandi has issued a fatwa which permits calling Yazid as a Leader of the Faithful and also send Allah’s blessings to him. https://lubpak.com/archives/231807. To our knowledge, no notable Deobandi cleric has condemned or rejected this fatwa by the Darul Uloom Deoband in favour of Yazid.)

We hope that Najam Sethi and Raza Rumi will retract the interview and offer an unconditional apology to the Shia, Sunni, Ahmadi, Christian and other communities of Pakistan. 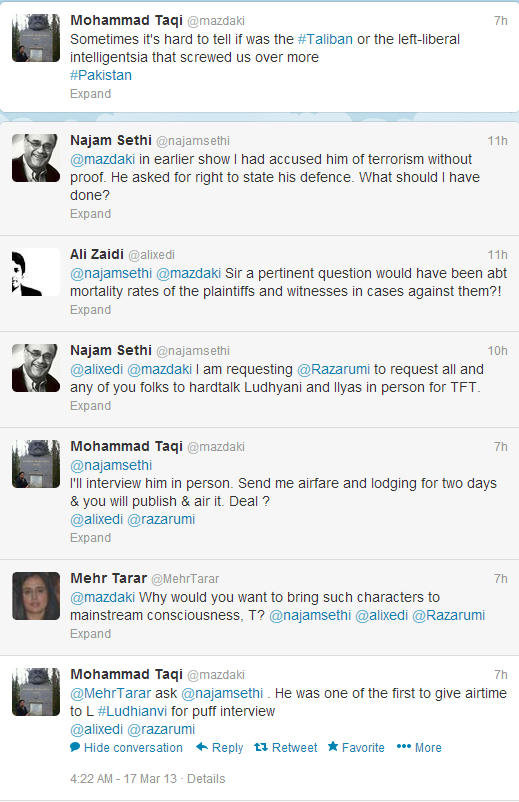 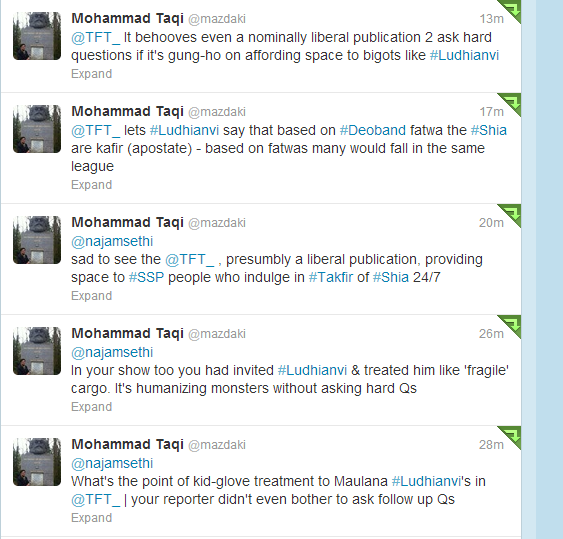 Dr. Taqi calls it a cheap shot when Sethi hides behind the veil that someone in his “large bureaucratic” organization did the interview and he is not really responsible. Hard to believe that terrorists like Takfiri Deobandi Ludhanvi can be interviewed by The Friday Times with no involvement of of editors. 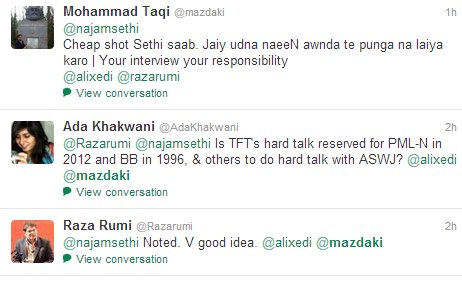 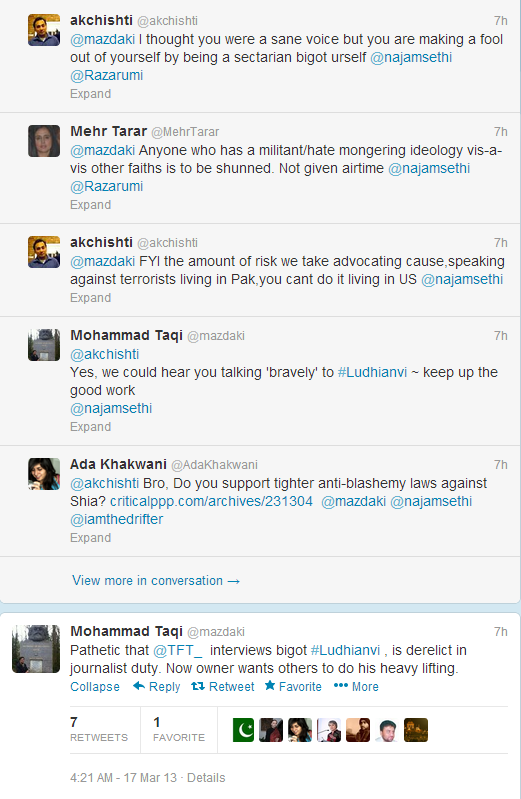 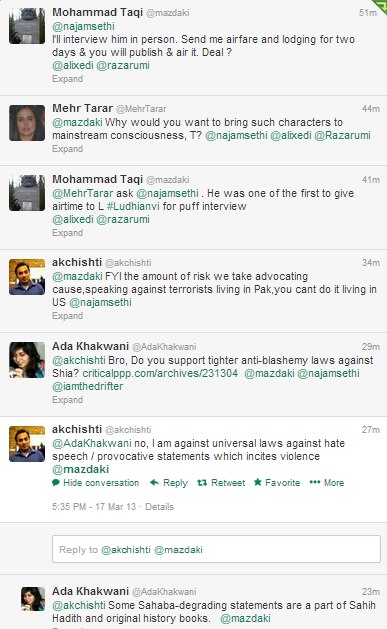 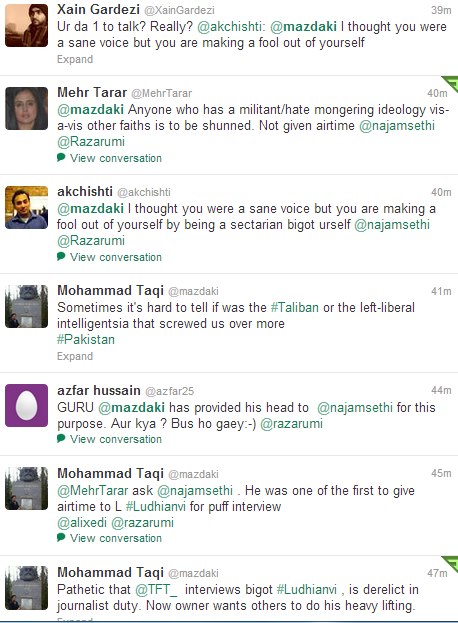 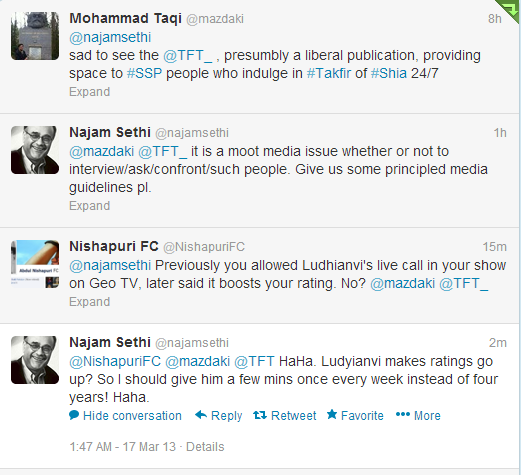 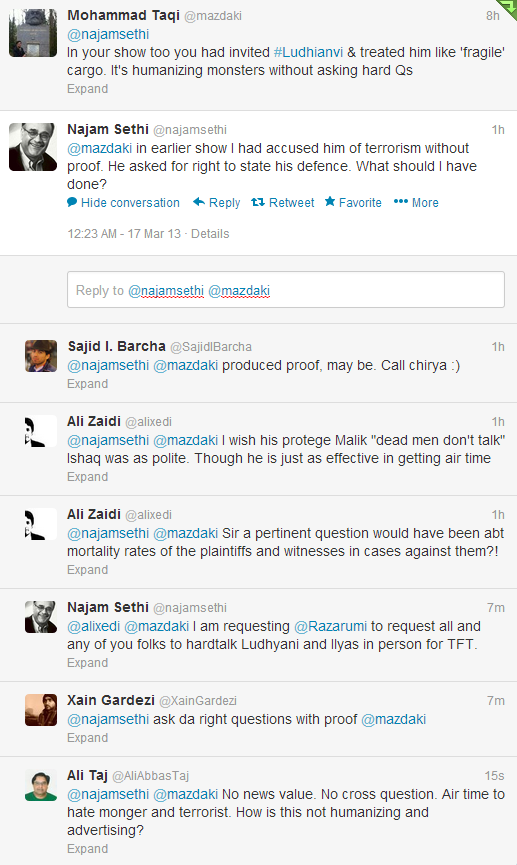