Editors note: We are cross posting a fine blog piece by Omar Waraich. It is on point except where Omar Waraich seems to be consuming the establishment narrative of hiding behind politicians to take action. One should ask the question whose permission is being given to the Army to kill and torture hundreds of Baloch nationalists. Army needs the proxies (LEJ Talibaan) to fight the Baloch nationalists. General Kiyani would rather they keep their 9-5 job and fight the Baloch nationalist, but they moonlight and kill shia which is considered acceptable collateral damage by the Army. This narrative is being actively propagated by the ISI cooped media and judiciary is being used as a tool to release the Army proxies. We recommend that Omar Waraich Should read: 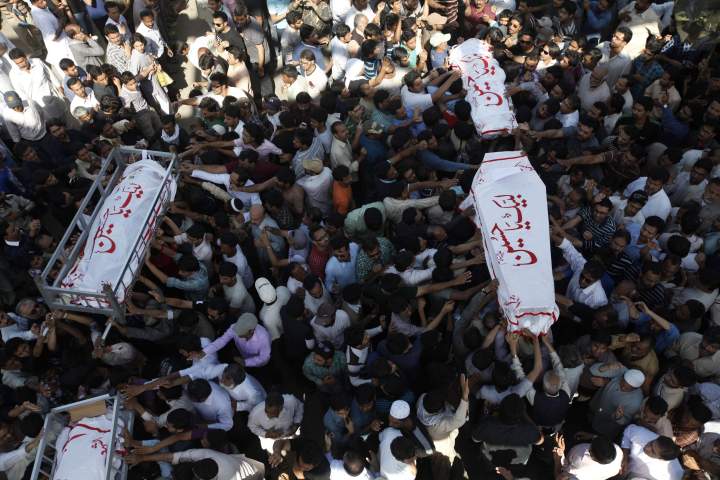 On Monday, a large crowd of Shi’ite Muslim mourners was streaming back from a graveyard in Karachi, Pakistan’s largest city. Thousands had been attending the funerals of 45 fellow Shi’ites who were killed by a large explosion on Sunday night (the bombing wounded 200 others). As the mourners headed home, they were fired upon. Two of their number fell dead, to be later lowered into the earth at the same cemetery.

In just over two months, an estimated 300 people have been killed in a series of attacks on Pakistan’s Shi’ites. On average, more than five Shi’ites have been killed in Pakistan every day this year. In January, around 100 members of the Hazara Shi’ite community were slain in two bombings in the city of Quetta. Just five weeks later, 89 members of the same community suffered the same fate after another large explosion. Other, smaller attacks have taken place elsewhere: last month, a Shi’ite doctor and his son were both shot in the head in Lahore, and a Shi’ite lawyer was killed in Peshawar.

(MORE: Pakistan’s Newest Martyrs: Why Anti-Shi‘ite Violence May Be the Country’s Biggest Problem)

Suspicions over who was behind the Karachi attack have swiftly fallen on Lashkar-e-Jhangvi (LeJ), the al-Qaeda-aligned anti-Shia group that has claimed responsibility for the earlier attacks. But blame isn’t being cast just on the perpetrators. Many are demanding to know why the government, having witnessed the Shi’ite community’s worsening plight over several years now, appears unable protect them. “It doesn’t seem to be that anyone is bothered,” says security analyst Ejaz Haider.

Last month, after the second attack on Quetta’s Shi’ites, Interior Minister Rehman Malik predicted that “Karachi will suffer even worse.” But there was no evidence that the authorities were prepared for it. More than an hour passed before the emergency services arrived on the scene of Sunday’s bombing. Even more incredibly, elite police units were diverted to provide VIP protection at the engagement ceremony of two members of the ruling Pakistan People’s Party at the Mohatta Palace Museum, taking place that night. On Tuesday, instead of visiting the Karachi victims as expected, Prime Minister Raja Pervaiz Ashraf left the country for a private visit to India.

After each of the attacks in Quetta this year, the Shi’ite community refused to bury its dead until there was some promise of official action. They were mollified, after the first attack, by the sacking of the provincial government. But the direct rule from Islamabad that replaced it failed to prevent a repeat massacre. After the second Quetta atrocity, Prime Minister Ashraf promised a “targeted operation” against the attackers. What ensued was criticized as a cosmetic measure: some of LeJ’s leaders taken into custody, but not enough of them to undermine the militant group’s apparatus.

Part of the reason for the inaction is simple fear: LeJ is notorious for assassinating the politicians, law enforcement officials and witnesses that have spoken out against it and attempted to bring it to justice. (Former cricketer Imran Khan has won widespread praise for being one of a few politicians willing to condemn LeJ by name.) Another reason, analysts say, is political calculation. With Pakistan’s next elections looming in May, politicians fear that decisive action against LeJ and its affiliates could trigger even greater violence, leading to the indefinite suspension of the polls.

Without political backing, military action can be ruled out. In any case, the generals already plead that they are overstretched and can’t commit additional troops. Deploying the army might not even be the most advisable course. “Military action is a sledgehammer,” says analyst Haider. “It isn’t useful in urban areas.”

Khan, the cricketer turned politician, tells TIME that the militants can be stamped out “if their funding is squeezed and police action is backed by good intelligence.” The police and the intelligence agencies, analysts say, already know who the main anti-Shi’ite militants are. “There are lists of these people that various security agencies already have in their possession,” says Haider. “This is the sort of extraordinary situation where they need to be picked up. There are laws in place than can be invoked here.”

Local law enforcement authorities also need to react more swiftly to attacks. “At least in that situation,” says Haider, “the victims can see that there is a government responding to their suffering.” The delayed response to Sunday’s attack has left many Shi’ites feeling that they are on their own.

Some Shi’ites are even questioning their position in Pakistan itself. Until now, Shi’ites – who form somewhere between a fifth and a quarter of the population – felt themselves to be a part of the Muslim mainstream. The founder of the country, Mohammed Ali Jinnah, though secular, was of Shi’ite lineage. “Now,” says Haider, “Shi’ites are beginning to see themselves as a persecuted minority.” That could have profoundly destabilizing consequences for Pakistan, for there are already ominous signs that some Shi’ite groups are getting ready to take up arms to defend themselves. If they do, a bloody new chapter in the country’s long history of unrest will be opened.