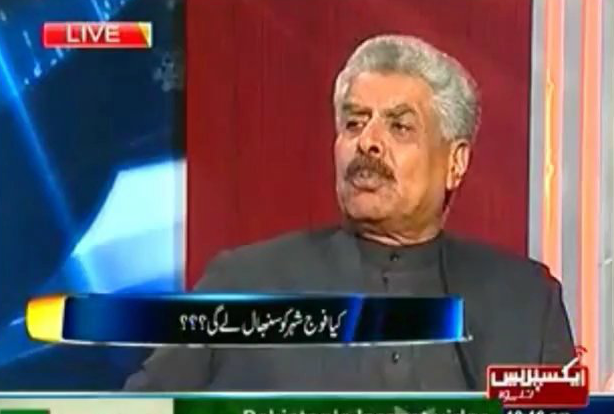 This is a must watch video clip based on reflections by two leading Baloch politicians Mir Hasil Bizenjo and General (retired) Abdul Qadir Baloch on Shia genocide in Balochistan and wider Pakistan.

For the past four years, LUBP has been claiming with strongest possible circumstantial evidence that it is the Pakistan Army which has been enabling the Shia genocide in Pakistan by nurturing Jihadist-sectarian Deobandi militants and turning blind eye to their collateral Jihad against Shias, Sunni Barelvis, Ahmadis, Christians etc. LUBP has uncovered in the past how the ASWJ-LeJ assassins were allowed to escape from the maximum security jails in various parts of the country, e.g., Quetta, Gilgit.

Another argument, which has never been refuted by the Army or its media lackeys, is that in a heavily besieged (by the Army) city of Quetta where one cannot even pass by an Army checkpoint undetected even if one was carrying a matchbox in his pocket, how come terrorists drive trucks with 1,000 kilograms of explosives in them?

And now two foremost Baloch leaders have corroborated LUBP’s claims. In a recent interview, they have recounted how Pakistani State including army has been facilitating hatred and genocide of the Shias since 1970s.

The two Baloch leaders Mir Hasil Bizenjo and General Abdul Qadir Baloch both agreed that without the ‘failure’ of various intelligence agencies, no act of terrorism is possible in Balochistan, every inch of which is manned by the Army.

Mir Hasil Bizenjo gave a short historical background of how the Army cultivated the Shia hatred in Pakistan by promoting Takrifi Deobandis and Wahabis:

1. Increasing hatred against Shia Muslims began to be promoted by the martial law authorities in the 1970s. He said that he thrown out of Karachi University when his Deobandi teacher of Islamic studies suspected him of being a Shia.
2. He met terrorists who were nurtured by the Army. One of them proudly told him that he had killed 16 innocent Shias because they were Infidels.
3. The state of Pakistan which is actually controlled and run by the army has never taken notice of the Shia genocide.
4. Everyone knows the hideouts of the LeJ terrorists, but all people are helpless because these terrorists are protected by the Army which has helped them escape from jail in the past.
5. The Army can hunt down and kill Baloch human rights activists at will even if they are in the hiding. But not a single Shia killer has ever been nabbed.

The interviews of Mir Hasil Bizenjo and General Abdul Qadir Baloch have vindicated the LUBP claim that the Army as an institution has been involved in the Shia genocide. Now it is up to the non-Takrifi Pakistanis (who happen to be over 90 percent of the population) to stand up to this evil institution in various ways (social media, public gathering, writing to world bodies) to humanize it and stop it from becoming a completely mercenary army which kills its own citizens because it is bankrolled by the House of Saud.

Referring to hatred against Shia Muslims in Pakistan since 1970s, including in urban educated Pakistanis, Mir Hasil Bizenjo’s narrates personal experience where an Islamic Studies teacher at Karachi University throws him out of the classroom on suspicion of being a Shia . Mir Bizenjo also relates an incident in which a Deobandi militant admits to slaughtering 16 innocent Shia Muslims only because they consider Shias Kafir (infidel).  This is going on in where Deobandi extremists thing they are buying their ticket to heaven by murdering innocent Shia Muslim men women and children.

Lack of action by Pakistani state to stop hatred against Shias, societal hatred, and anti-Shia violent groups and further lack of any writ of central government has lead to wholesale slaughter of Shia Muslims. The Pakistani establishment’s priorities conflict with security of citizens of Pakistan This has been thoroughly proven by many writers at  several diverse forums including this one.