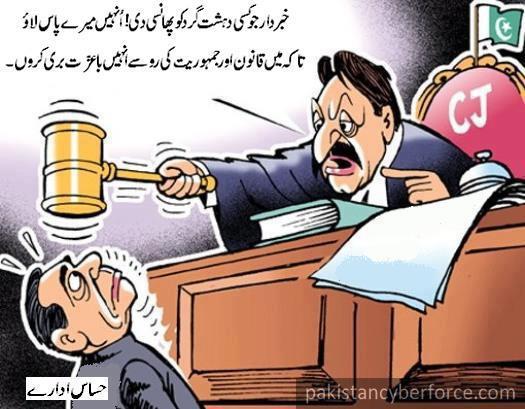 In 2009, Justice Iftikhar Chaudhry visited the Karachi jail where he held his court and took a personal look at the prisoners. The result was that he set free 92 terrorists belonging to the ASWJ/LeJ. In his order he wrote that he was setting them free because there was lack of evidence. “Lack of evidence” has been the most effective weapon of Justice Chaudhry and his fellow pro-Takrifi Islamofascist judges. The Intelligence Bureau (of course, not the ISI) tried to convince him not to let them free, but the “Lack of evidence” hammer was hit on it head.

After getting released by Iftikhar Chaudhry, these terrorists went on a Shia-killing spree. It was within days of their release that the targeted killing of the Shia Muslims in Karachi increased manifold. The spree went on for two years. The PPP-MQM government kept quiet as usual because: (i) they have been spineless, characterless parties; and (ii) when the Supreme Court relases someone, no one dare touch him.

The killing of the Shias went on unchecked. It was only the likes of the LUBP and Daily Times which documented the Shia killing in Karachi. In order to shut up those doing the documentation, Justice Chaudhry descended in Karachi one more time. This time it was December 2011. He heard the Karachi chaos case and gave his verdict in which he put his seal of approval exonerating the Taliban/ASWJ/LeJ. Below we are reproducing an article published in Daily Times in which the hidden agenda (viz, give a clean slate to the Taliban/ASWJ/LeJ) of Justice Chaudhry’s verdict was made public. In were made public

No individual, party, or group (excepting Jamaat-e-Islami) has tried to read deeper into the Supreme Court’s verdict on Karachi’s law and order problem. It seems politically correct to shower praise on the verdict and express the desire to implement the guidelines given therein. The verdict, however, fails to address the real causes of intense violence the residents of Karachi have been subjected to for years. The Supreme Court held a suo motu hearing on the Karachi violence because the judges had been worried over the matter. They should be praised for it. This writer believes that any constructive criticism of the Karachi verdict will be taken in good faith by the judges.

The verdict says that the violence in Karachi is not ethnic but a result of conflict between groups over economic, social and political interests. This is a tricky observation. In Karachi, there are no economic or social no-go areas. There are, for instance, Pathan or Mohajir no-go areas, i.e. ethnic no-go areas. Ethnicity and political economy in Karachi are so deeply intertwined that they cannot be isolated. The Supreme Court verdict has referred to economic, social, and political interests. However, it did not put the right perspective — i.e. the ethnic perspective — on it.http://www.dailytimes.com.pk/default.asp?page=2011%5C10%5C12%5Cstory_12-10-2011_pg3_3