Home  »  Featured • Original Articles   »   “Throw the Shias out of the fold of Islam!” Ansar Abbasi justifies #ShiaGenocide through his column in Jang 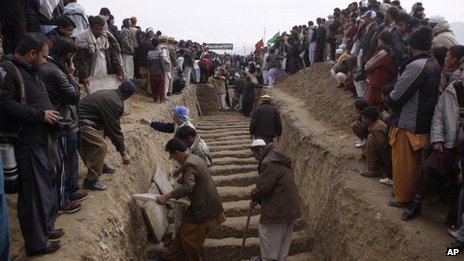 More than 21,000 Shia women, men and children have been killed in Pakistan by Takfiri Deobandi “Soldiers of the Companions”.”

In his column of 21 February 2013 published in Urdu daily Jang, Ansar Abbasi (pro-Taliban journalist) has continued his subtle justification of the Shia genocide at the hands of Takrifi Deobandi groups such as the Lashkar-e-Jhangvi (aka ASWJ) and their sponsors such as the PML-N and some media houses such as the Geo-Jang group itself.

Writing his column against the background of the latest Shia carnage in Quetta in which 113 Shia men and women of every age were killed and hundreds injured by Takfiri Deobandi terrorists of Sipah-e-Sahaba (Soldiers of the Companions of Prophet aka ASWJ-LeJ), he starts in his usual style by quoting from the Quran and the Hadith by pleading for the unity of Pakistani Muslims. (Read the columns here: http://jang.com.pk/jang/feb2013-daily/21-02-2013/col16.htm)

In essence, Ansar Abbasi repeats the typical Salafist-Wahhabi Nazi-puritanical theory that sects are not allowed in Islam. In other words, all Shias, Sunni Barelvis etc should convert to Deobandi-Wahhabi sect in order to make Islam one and pure.

After urging the people to become just one group of Muslims, and not a collection of sects, Ansar Abbasi says,

(ii) In the Koran, Allah says that He is as much happy with the Companions as they are happy with Him

(iii) According to the hadith, the Prophet (peace be upon him) said that all of his companions are like the stars in the sky. This inauthentic (Zaeef) Hadith is often quoted by LeJ-ASWJ terrorists and neo-Nazis of Islam in order to silence all historically recorded criticism of the conduct of certain Sahaba after the Prophet’s death, particularly those who physically and politically hurt the Family and descendants (Ahle Bait and Aaal) of the Prophet Muhammad.

After this, Ansar Abbasi takes out his Sipah-e-Sahaba (ASWJ-LeJ) dagger and attacks the Shias: “How can one be so consumed in sectarian hatred that one starts saying indecent words about the companions and the wives of the Prophet (peace be upon him)?”

Then he demands of the government and supports what has been previously demanded by Ahemd Ludhianvi, Malik Ishaq and pro-establishment Fake Liberals eg Ali Chishti, “The government should do legislation against those who insult the companions and the wives of the Prophet (peace be upon him) and punish them to the maximum.” 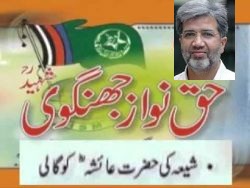 Ansar Abbasi is a liar and a hypocrite. He claims that the companions of the Prophet (peace be upon him) are sacrosanct and those who insult them should be severely punished. But he does not tell his readers who are Islamofascists like him that in the very Quran, Allah tells the Prophet (peace be upon him) that there are hypocrites around him. These are the words of Allah,

“If the hypocrites, and those in whose hearts is a disease, and the alarmists in the city do not cease, We verily shall urge thee on against them, then they will be your neighbors in it but a little while.  Accursed, they will be seized wherever found and slain with a (fierce) slaughter” (33: 60-62).

“And some of the illiterates around you are hypocrites; and some of the people of Medinah; hypocrisy has become ingrained in them; you do not know them*; We know them; We shall soon punish them twice – they will then be consigned towards the terrible punishment.(Until now or as well as We do. In life and in the grave of hell.)” (9:101)

In another place, Allah says,

“Already Allah knows the hinderers among you and those [hypocrites] who say to their brothers, ‘Come to us,’ and do not go to battle, except for a few” (33: 18).

“The Prophet of Allah [peace be upon him] once said to me, ‘Even to look at Ali is an act of worship!’”

And this is what Allah says about the hypocrites,

“O Prophet, fear Allah and do not obey the disbelievers and the hypocrites. Indeed, Allah is ever Knowing and Wise” (33:1).

One hopes that the Muslims of Pakistan—of course excluding Takfiris like Ansar Abbasi himself—will condemn those in the media who justify the Shia genocide.

Maulana Maudoodi (famous Sunni scholar) reached to this conclusion AFTER years of research and reading/examining hundreds of books. Unlike self serving mullahs of today’s Pakistan who do not care about facts at all, Maulana Maudoodi did acknowledge how certain Sahaba (Companions) of the Prophet engaged in greed and mischief after the Prophet’s death and caused irreparable damage to Islam and violated the honour of the family and descendants of the Prophet.
http://worldshiaforum.wordpress.com/2012/12/19/exerpts-from-khalafat-and-monarchy-by-syed-abul-ala-maudoodi/ 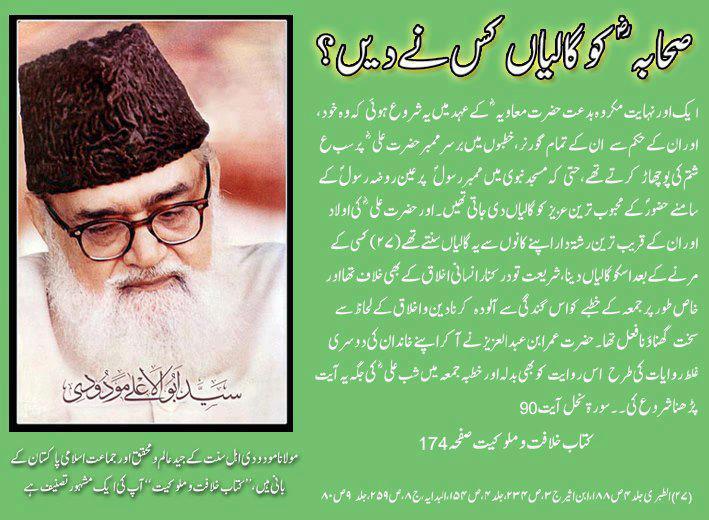