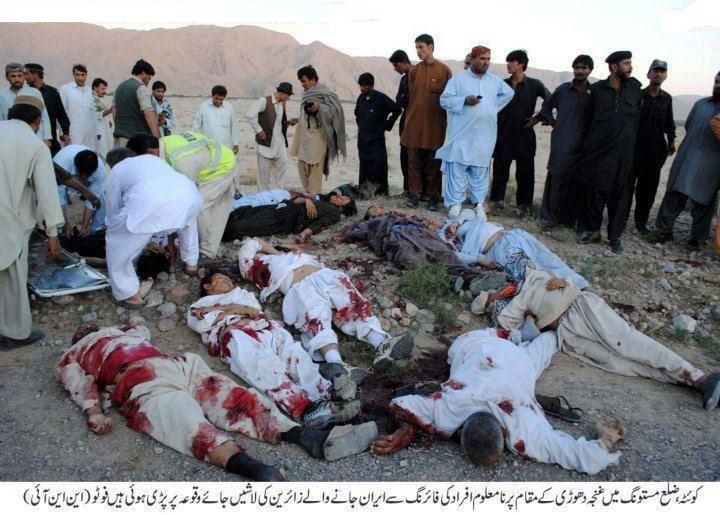 At least 29 Shias were massacred in Mastung (Sep 2011) by radicalized Baloch members of LeJ-ASWJ.

Shia Killings and Baloch Nationalists: A response to Ali Ahsan

In recent years, we have seen Balochistan become engulfed in a multi-layered conflict in Pakistan’s increasingly complex Post-9/11 predicament.

From separatist militancy (or the struggle for freedom, using the Baloch nationalist discourse), history of military operations, FC (Frontier Corps of Pakistan army) heavy handedness, human rights abuses, deliberate purging of ‘settlers’ (mostly of Punjabi, Saraiki, Sindhi and Urdu-speaking backgrounds), we have also seen an increasingly dangerous aspect of an apparent Shia genocide that has plagued the rest of Pakistan too.

One can easily say that amid violence and chaos in Balochistan, there is even more chaos and intrigue that goes far below the surface too.

One aspect is the role of the anti-Shia terror of the Lashkar-e-Jhangvi (LeJ) as well as its “allies” or “mentors” in the rebranded Ahle Sunnat Wal Jamaat (formerly Sipah-e-Sahaba Pakistan) in Balochistan.

Initially when the reports of target killings of Shias including Hazara and non-Hazara Shias, began in the last decade in Quetta, the usual suspects, thanks to mainstream stereotypes, were the Pashtun-dominated Taliban and their LeJ-ASWJ-SSP allies whose presence in Pashtun parts of Quetta and Pashtun districts of north-east Balochistan became the talk of town.

However, the increasing intensity of the Shia genocide in Balochistan has taken a disturbing twist: a careful analysis of available information (news reports, videos, demographics) would reveal that while some acts of Lashkar-e-Jhangvi terror acts in Balochistan are caused by radicalized Pashtuns or Punjabis, most are done by local radicalized Baloch. While the masterminds may be based in Jhang or Rawalpindi, the actual footsoldiers happen to be the newly emerging sectarian breed of Balochs.

This author spoke briefly with various senior journalists from Quetta (whose name he would prefer not to disclose) many months back, and he was surprised when almost all the journalists and reporters revealed that majority of LeJ operations and planning is taking place in Baloch-concentration areas.

It was also revealed that whenever local police attempted to do search operations in wake of Shia killings in Quetta, their information almost always led them to raid the Baloch areas of Sariyab Road each and every time – and some of the killings of Shias have also taken place in that very area.

Now it is also apparent that areas like Sariyab Road are considered a hub of Baloch nationalist-separatist activity, but the LeJ dimension of Sariyab Road adds another twist in the tale.

I know that this blog (LUBP) sympathises and supports Baloch struggle for separation/freedom, however, it should also consider that anti-Shia sectarian militancy is also making inroads in Baloch nation.

A viral video has made rounds online where a Quetta bus carrying Shia pilgrims was stopped by masked terrorists in Mastung (September 2011), and where all Shias (including Hazara and non-Hazara Shias) in the bus were rounded up and shot dead in cold blood. Upon closer inspection of that video, it turns out that the killers of those Shia pilgrims were not speaking Pashtu or Punjabi – as the common stereotype is – but Brahvi mixed with some Balochi. Brahvi speaking people are an integral part of the Baloch nation.

In recent times the Baloch city of Mastung – an traditional stronghold of Baloch politics – has become a hotbead of anti-Shia killings and many deadly acts of terror have been carried out against Shias in and around Mastung where the local language is both Brahvi and Balochi.

This surprising new dimension made the author approach some local Bangulzai people of Mastung (names withheld), and even they confirmed that yes, LeJ terror acts are carried out by local radicalized Baloch militants. They even said that the Mastung streets are now littered with anti-Shia wall chalkings in many localities.

The recent bold show of Muhammad Malick on Dunya with Amir Mateen talking about Shia Genocide in Balochistan also revealed that LeJ was taking hold in otherwise secular Baloch nation; he also the names of the LeJ activists roaming free and carrying out their dirty deeds – all of the names were Baloch (e.g., Saifullah Kurd and Shafeeq Rind who escaped high security anti terrorist jail in Quetta cantonment with the alleged connivance of the security agencies).

Listen to Amir Mateen in the above video at 04:30 “All of the sectarian terrorists nabbed in Balochistan are 100% Baloch. Religious extremism is being spread in the otherwise tolerant Baloch nation.”

Such revelations from diverse sources, mixed with careful examination of news reports of Shia Genocide in Balochistan, and a bit of independent research makes the Baloch-dimension of the killings become a real shocking and disturbing aspect of the country-wide Shia genocide taking place in Pakistan, right from Quetta to Gilgit and from Karachi to Parachinar.

As earlier stated, Mastung is a Baloch city and that is a LeJ-ASWJ-SSP stronghold now. Of course, several of such radicalized anti-Shia Balochs are working as mercenaries in Saudi-Bahrain suppression of pro-democracy demonstrations in Bahrain. Some of them are also aligned with Jundullah, have racist tendencies against entire Iranian nation (instead of Iranian ruling elites) and mourn when Jundullah terrorists were nabbed by Iran. Baloch Nationalist Front (BNF) and others officially declared mourning for the execution of Abdul Malik Rigi, who was Iranian version of Pakistan’s Malik Ishaq or Iraq’s version of Abu Musab Zarqawi, in hatred and murder of Shias. Here are two of several incidents of Shia genocide conducted and claimed by Jundullah: 32 Shias were killed on Imam Hussain’s birthday in Zahidan in July 2010, and another 38 were killed in December 2010 in an attack on Imam Hussain Mosque.

Balochs have been very tolerant to Shias and other minority groups. Hindus have lived most peacefully in Balochistan.. Baloch-Brahvi society always been heterogenous, all-welcoming. I knew plenty in real life, they are lovely folk. However, radicalized Balochs do not represnt all Balochs; same way a few Punjabi/Pashtun degenerates do NOT represent all Pashtuns and Punjabis. I am NOT judging whole of Baloch nation as “sectarian monsters” as I dont judge Pashtuns Punjabis either.

I want to emphasize that Baloch nationalists must act against these sectarian savages that are getting powerful in society. This is also a challenge for secular Balochs to take firm stand against State-sponsored LeJ militants in Balochs.

It is often though of that the Baloch are traditionally very secular and easy going as far as religion goes – which is true (e.g. BSO is reported to be against the religious radicalization of the Baloch society) – but it is also said that the Brahvi-Baloch tend to be more religious of them all (many of them follow Deobandi sect; some also work in LeJ), and such a sectarian dimension of Baloch involvement and agonisingly close proximity with traditional hubs of Baloch nationalist-separatist groups begs a few more disturbing questions not only from the State but also from Baloch nationalists.

NOTE: The views expressed in the article are by the author alone based on his own research, interviews, and interactions with people from Balochistan over the last 7-8 months. The author tweets @Suprah_ The article was edited and some ideas inserted by the LUBP publishing editor for better clarity and objectivity.

Sohaib Mengal Baloch ‏@MirSohaib
LeJ is supported by Shafeeq Mengal who is involved in Killing hundreds of Baloch activists.

Abdul Nishapuri ‏@AbdulNishapuri
The Baloch nation is generally averse to radical Islamism. A few Brahvi/Baloch militants in LeJ-ASWJ do NOT represent all Balochs. Baloch nationalists must also act against LeJ sectarian savages that are making inroads in Baloch nation.

Ali Haider @QuettaSettler
call them whatever you want, LeJ or PeJ, the fact is they r gang of criminals working for & r fed/protcted by #ISI. Dasht/Mastung areas are Headquarters of #ISIstooges; as per orders they attack shias or attack NATO supply lines.

Mr. Shahzada Zulfiqar, Senior journalist, stated in a recent talk-show that Baloch LeJ Takfiris are involved in the killings, yet they are specific extremist group who do not represent all Baloch.

We urge our Baloch brethren to take notice of those involved in extremism and renounce/disown them.