130 innocent schoold children killed. Another day, another tragedy in Pakistan where 90 % of such horrible terrorists acts are committed by Deobandi terrorist organisations. The time for condemnations and mourning is long, long past!

There are no good Taliban. No Afghan vs Pakistan vs Punjabi Taliban. There are just Taliban who are recruited from Deobandi madrases all over Pakistan and who are ideologically committed to mayhem, hatred and murder. 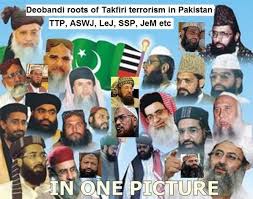 This is the time for action and this is where Pakistan’s biggest tragedy lies. Pakistan’s Federal Government lead by the Nawaz Sharif’s family and cronies aka PML N is solidly pro Taliban. Senior ministers and advisors to Prime Minister Nawaz Sharif like Sartaj Aziz and Chaudhary Nisar are still spouting the Good vs Bad Taliban rubbish. Most importantly, PML N has been in a long standing alliance with the ASWJ-LeJ (formerly known as Sipah-e-Sahaba) who are the urban partners of the Taliban.

The main opposition to the PML N comes from the PTI – itself a shameless apologist for the Taliban. Between the power struggle of these two largest political parties in Pakistan, there is little difference in their apologist and accommodating approach to the Taliban.

Refer to:  The role of Taliban allies; Judiciary, Media, ASWJ, PML N, PTI, in the murder of Chaudhary Aslam

Pakistan’s Judiciary is also a supporter of the Taliban – the former corrupt and infamous Chief Justice of the Supreme Court, Rana Iftikhar Chaudhary was even appreciated by the Taliban.

Media loudmouths like Ansar Abbasi (a recent favourite of Pakistan’s Fake Civil Society), Orya Maqbool Jan, Hamid Mir, Haroon Rashid, Javed Chaudhary and other similar bigots have made a career out of being apologists and deniers of Taliban’s crimes against humanity.  Taliban’s urban Deobandi affiliates, the ASWJ-LeJ is frequently given media space by these media bigots to justify their crimes against humanity.  Another Fake civil society favourite, Hamid Mir is a career apologist for the Taliban.

Pakistan’s Fake Civil society and pseudo liberal lobby also has a problematic stance on the proper identification of terrorists. Some of them are congregated under the umbrella of the dubious Jinnah Institute – whose major study made the same spurious distinction of Good vs Bad Taliban.

The Pakistan Army, especially under the last COAS, Gen (r) Parvez Kayani allowed the Taliban and other Deobandi terrorist organisations to run amock in Pakistan. The Media and Judiciary and PML N and PTI simply served as the cheer leading squad for these blood thirsty child murderers.

Pakistan cannot survive this any longer. On December 16, 1971 we lost half the country due to our racist mistreatment and non-recognition of the genuine rights of our fellow country in the former East Pakistan. The Jamaat-e-Islami’s Al-Shams and Al-Badr brigades played a major role in that tragedy with their role in the genocide of Bengalis. On December 16, 2014, we lost another part of our soul as over a 100 children and teachers (so far) have been murdered by the Deobandi terrorist organisation, the Taliban which was created and supported by our military establishment as well as various civilian governments. There is enough blame to go around but few to bell the cat.

“Our suicide bombers have entered the school, they have instructions not to harm the children, but to target the army personnel,” he said.

“We targeted the school because the army targets our families. We want them to feel our pain,” he was quoted saying by a foreign news agency.

“It’s a revenge attack for the army offensive in North Waziristan,” he said, referring to an anti-Taliban military offensive that began in June.