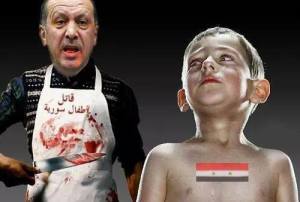 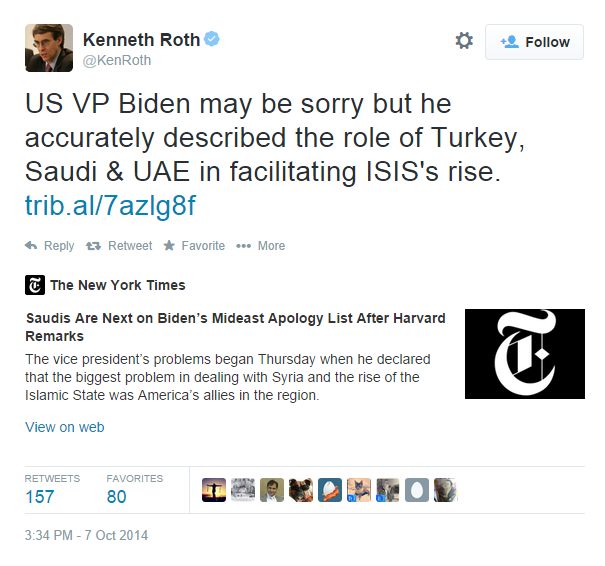 Two recent developments have completely exposed the Turkish PM Erdogan as one of the main supporters, financiers and backers of the Salafi-Deobandi terrorist group, ISIS aka Daish aka IS. In recent comments and in his typical candid manner, US Vice-President Joe Biden called out US allies, Turkey and Saudi Arabia for funding ISIS.  Refer to this report for greater details

“Joe Biden is much better than Obama, because he speaks his mind and actually, at time, reveals pretty clear truths. He has recently criticized America’s “allies” in the Middle East, that be being Turkey and Saudi Arabia, for supplying money into Al-Qaeda and thus ISIS”

“Foreign fighters have never entered Syria from our country. They may come to our country as tourists and cross into Syria, but no one can say that they cross in with their arms,” Erdogan said.”

This statement by the viciously anti-Shia Erdogan highlight the sheer mendacity of the Turkish PM!

The mess in Syria and Iraq is largely due to the sectarian policies of Turkey and Saudi Arabia who have destabilized the entire region with their support to Al Qaeda and ISIS.  It was Turkey that hijacked the pro-democracy protests in Syria by allowing the infiltration of Salafi-Deobandi Jihadis in to Syria from all over the world.  Turkey funds ISIS and allows them to operate from camps within Turkey.

If any further evidence was needed of Erdogan’s perfidy, it was revealed in his opposition to the airstrikes against ISIS in the Kurdish city of Kobane.  In this instance, Erdogan then proceeded to shift the entire focus from ISIS to the current Syrian government under Bashar Al-Assad.  By doing so, Erdogan is hoping to achieve several Salafist objectives at the cost of peace to the region and the world community.

He wants the Kurds in Kobane to continue to suffer under ISIS.  Kurds are a minority nationalist group in Turkey that have been brutally suppressed by Erdogan and other Turkish leaders for decades.  There are significant Kurdish minorities in Iraq, Syria and Iran as well.  In Iraq, the Kurds enjoy an autonomous status post Saddam.  The Kurds, who are majority Sunni Sufi (with Yezidi and Shia minorities) have opposed ISIS in both Syria and Iraq.  Erdogan’s problematic statements on Kobane reveal his animus against the Kurds who overwhelmingly oppose the brutality of ISIS and other Salafi Deobandi takfiri militants.

Erdogan and his Saudi allies are obsessed with removing a secular leader, Bashar Al-Assad in Syria. They funded Al Nusra, an Al Qaeda faction and a major component of the FSA.  ISIS is a spin off of Al Nusra (Al Qaeda) and consists of arms and men facilitated by Turkey under PM Erdogan.  This adventure of funding ISIS by Turkey, Qatar and Saudi Arabia plunged Syria into a brutal civil war with nearly 200,00o killed and millions displaced. Ironically, President Bashar Al-Assad and Hezbollah have been at the forefront in fighting Al Nusra and ISIS.

In the world community’s fight against ISIS, Erdogan has proven to be one of the biggest impediments. His proposal for a No-Fly Zone is designed to protect ISIS from airstrikes by US and by the Syrian airforce.  He wants to propose a “Libyan Model” which saw the takeover of Libya by Al Qaeda and the subsequent brutal murder of the US ambassador in Libya.

It would be best for the fate of tens of millions of Iraqis, Syrians and Turks, and of course Sunni Sufis, Kurds, Shias and Christians, if Erdogan himself spent sometime in Libya and enjoyed the results of “regime change” there.  He would feel right at home in the public rallies taken out by ISIS and Al Qaeda in Libya. 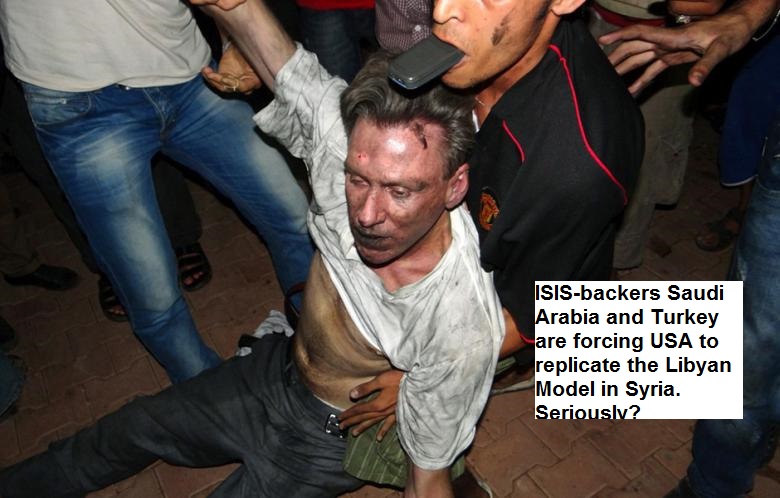