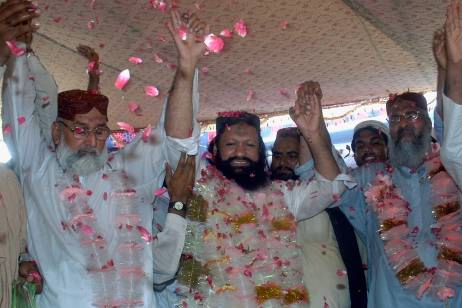 In its latest issue, Foreign Policy has published an article by Benazir Shah titled “The Trouble Convicting LeJ’s Malik Ishaq” (Read:http://southasia.foreignpolicy.com/posts/2014/08/19/the_trouble_convicting_lej_s_malik_ishaq) in which the facts of the Shia and Sunni Brelvi/Sufi genocide in Pakistan have been stood on their head. Shah’s own intentions in writing the article cannot be suspected; she has tried to give some details of Malik Ishaq who has killed hundreds of Shias and supervised the killing of thousands of Shias. But unfortunately, scions of Pakistan’s high society, being cut off from the society at large, have little knowledge of facts and issues on the ground. Also, having, in most cases, been educated in Western universities, they learn how to write cohesively; but they cannot write coherently because they fail to read into cultural nuances and even understand facts qua facts. Thus, despite being equipped with appropriate lexical repertoire and grammatical preciseness, their analyses are often superficial even when their intentions are aboveboard.

Shia and Sunni Brelvi killing in Pakistan has been naturalized thanks to the powerful section of the media that is too happy to promote murderers who want to turn Pakistan into an ‘Islamic’ state in the image of Saudi Arabia. Few write about the Shia killing anymore. While complimenting Benazir Shah for writing about an unabashed killer of Shia Sunni Christians and other minorities, I would like to analyze her article to show how it obfuscates the Shia genocide in Pakistan and invites Shia haters to support Shia killers.

Shah claims that Malik Ishaq is a Sunni and the Pakistan sectarian scenario is a Shia-Sunni conflict. Here is what she claims:

“Soon after his release in 2011, Ishaq’s violent Sunni outfit employed novel tactics to hunt down members of the Shiite minority sect.”

“Other jihadist groups, including Jaish-e-Muhammad, espouse its [i.e., LeJ’s] mission of establishing a Sunni state.”

The Deobandi assault on the Shias has been being projected as a Shia-Sunni conflict by many, especially those who are sympathetic to the Deobandi cause of apostatizing the Shias or by those who are ignorant of the nature of sectarianism in Pakistan. It is not the Shias only who have been facing the Deobandi terrorist assault. The Deobandis have been killing the Sufi Sunnis (Brelvis), Christians, and Hindus. By pedalling it as a Shia-Sunni binary, the impression is given that the Sunnis are killing the Shias or vice versa. It also gives the impression that in this binary, both Shias and Sunnis are equally involved. The Barelvi Sunnis who are in majority in Pakistan, have openly condemned the Deobandis for killing the Shias in the name of Sunni Islam. Likewise Shias have consistently condemned attacks on Sufi Sunni Shrines by Deobandi terrorrists like Malik Ishaq. In Pakistan, over 95 percent of all terrorist activities are being carried out by the Deobandis.

In the past twenty years twenty thousand Shia and over ten thousand Sunni Brelvi have been killed in relentless attacks on individuals, religious congregations and places of worship of both Shia and Sunni Brelvis. The organized Takfiri Deobandi proxies of the Pakistani deep Wahhabi state which is subservient to her Saudi master Wahhabi state.

A number of Deobandi clerical leaders of Pakistan co-signed or confirmed the fatwa against the Shia in 1986. Among them were two well-known names: Muhammad Yusuf Ludhianvi and Mufti Nizamuddin Shamzai. . . . Fatwas of apostatisation were issued from time to time from all the prominent Deobandi madrasas of Pakistan. Darul Ulum Haqqaniya Akora Khattak of Maulana Samiul Haq (the seminary where the assassins of ex-prime minister Benazir Bhutto have confessed to staying before the attack on her in 2007) issued its own fatwa of apostatisation of the Shia in 1986 saying that eating food cooked by them, attending their funeral and burying them in Sunni graveyards stood banned. Another fatwa from Jamia Ashrafia Lahore, whose leader Maulana Muhammad Malik Kandhalwi, known to be a relative of general Zia, declared the Shias kafir because “they held that the Quran had been tampered with and gave Hazrat Ali a status equal to Prophet Muhammad, claiming that angel Jibreel [Gabriel] had made a mistake while taking wahi [revelation] to the Prophet”. (Khalid Ahmed. 30 March 2013. Sectarian violence in Pakistan. Economic and Political Weekly: http://www.epw.in/commentary/sectarian-violence-pakistan.html)

Elsewhere, he reproduces the Deobandi fatwa which has been used to kill the Shias in Baluchistan,

“All Shia are worthy of killing. We will rid Pakistan of unclean people. Pakistan means ‘land of the pure’ and the Shia have no right to live in this country. We have the edict and signatures of revered scholars, declaring the Shia infidels. Just as our fighters have waged a successful jihad against the Shia Hazara in Afghanistan, our mission in Pakistan is the abolition of this impure sect and its followers from every city, every village, and every nook and corner of Pakistan.

“As in the past, our successful jihad against the Hazara in Pakistan and, in particular, in Quetta is ongoing and will continue in the future. We will make Pakistan the graveyard of the Shia Hazara and their houses will be destroyed by bombs and suicide-bombers. We will only rest when we will be able to fly the flag of true Islam on this land of the pure. Jihad against the Shia Hazara has now become our duty.” (Ahmed, Khalid. 11 March 2014. Hunting the Hazaras. Newsweek Pakistan: http://newsweekpakistan.com/hunting-the-hazara/)

Shah portrays Malik Ishaq as if he is a lone and loony Shia killer. By doing so, she assigns unqualified agency to him: That all his acts of violence are his own. It is like claiming that a sign of a disease is indeed a disease itself. Malik Ishaq was created, trained, and facilitated by the ISI and Nawaz Sharif and his cohorts. It is the ISI and the Sharif Brothers-led governments that have been giving protection to Malik Ishaq. Various governments of the Sharif Brothers have been providing him protection of elite police. When Malik Ishaq was in jail, the government of Shahbaz Sharif gave him thousands of rupees as a stipend. When questioned by a journalist, Shahbaz Sharif’s Law Minister Rana Sana said that the Lahore High Court had ordered him to provide him monthly stipend. But this was a lie. Even when it became public that it was a lie, the court did not take a notice nor the Sharif government deemed it fit to clarify its position (see, “LeJ’s Malik received monthly stipend from Punjab govt”: http://tribune.com.pk/story/210827/lejs-malik-received-monthly-stipend-from-punjab-govt/; and http://m.bhojpurinama.com/trendsplay/HWQjcKA7niU/Punjab-Govt-%2526-Rana-Sana-ullah-Lie-Exposed-on-Malik-Ishaq-received-monthly-stipend-%2528Edited-Part%2529).

Then there is the Saudi factor. The Saudis have been bankrolling Malik Ishaq. Despite having been banned from leaving Pakistan, Malik Ishaq flies to Saudi Arabia at will and gets funding to continue his genocidal campaign against the Shias. Shia-hating Saudis regularly visit him to assure him of their support (see, “Pakistan’s rulers under fire after Quetta bombing”: http://www.theguardian.com/world/2013/feb/17/pakistan-rulers-quetta-bombing;

The PML-N is a political face of Malik Ishaq’s terrorism. See,

The government complicity in the Shia genocide can also be understood how it allowed the Deobandi Taliban and Malik Ishaq’s LeJ to kill the Kurram Agency Shias for over a decade. From April 2007 and continued till February 2011, the Deobandi terrorists blocked the Thall-Parachinar road reducing the Shias to almost a state of famine. Finally the ISI-government representatives secured the road only when the Shias gave in to the Taliban-ISI demand that the people of Kurram would allow the Taliban free movement in their area, which is close to Afghanistan, in order to launch terrorist attacks in Afghanistan. Recently, the ISI-Army with the complicity of the Sharif government has relocated thousands of Haqqani Taliban in Kurram. The Shias have been protesting against it, and as a result, they have been facing one spell of curfew after another.

Like Pakistan’s academically highly qualified but societally illiterate journalists, Benazir Shah portrays the Ahle Sunnat Wal Jamat/Sipa-e-Sahaba Pakistan (ASWJ/SSP) and Lashkar-e-Jhangvi (LeJ) as two separate entities. This is not true at all. They are two arms of the same Shia killing outfit. The ASWJ styles itself as a political entity whereas the LeJ is portrayed as an invisible entity. It is Nawaz Sharif and his associates who have given a political face to the ASWJ. See,

To put it briefly, Malik Ishaq, the founder of the LeJ was till recently the vice-president tof the ASWJ.