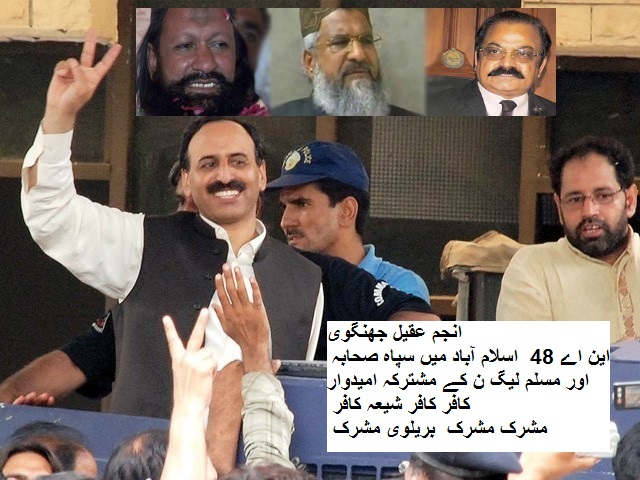 Islamabad and Rahimyar Khan: Worried by the potential for an upset defeat, the Pakistan Muslim League-Nawaz (PML-N) candidates in various constituencies in Pakistan, particularly in Punjab province, are joining hands with pro-Al Qaeda banned terrorist outfit Sipah-e-Sahaba (aka Ahle Sunnat Wal Jamaat Deobandi or Lashkar-e-Jhangvi) in order to garner a few more votes.

In Islamabad NA-48, PML-N’s candidate Anjum Aqeel has found a Takfiri-militant ally in his last-ditch efforts to rally support in the capital’s urban areas. 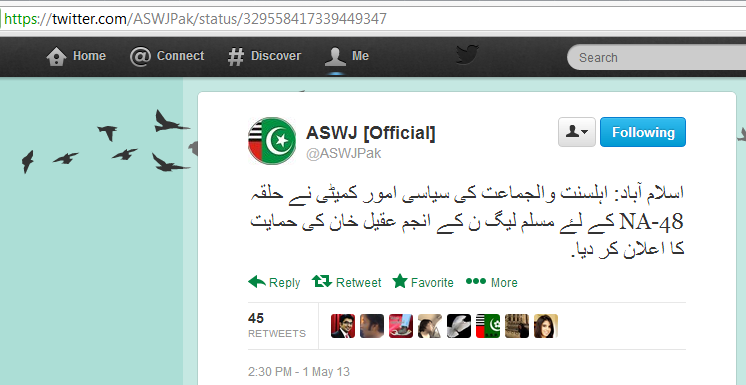 Anjum Aqeel Khan comfortably won the election in 2008 with 60 per cent of the vote, compared to his closest opponent, Dr Israr Hussain, who garnered 26 per cent. Since then, Khan — a property developer — has been in hot water with the law because of a multi-billion rupee corruption scandal. Though his party did not give up on him, some fear the voters may have.

“I don’t know about the PML-N policy towards the group in other parts of the country, particularly Jhang, which is an ASWJ stronghold, but I’m in touch with their Islamabad leadership,” Khan told The Express Tribune. Earlier this week, Khan had visited ASWJ headquarters to meet its leadership, who announced support for him in the next general elections.

Yet, the PML-N leadership seems to be in denial in order to avoid upsetting Western powers who are looking at PMLN’s alliance with Taliban and banned terrorist groups with unease. When asked about the party’s position on the alliance, PML-N spokesperson Senator Mushahidullah Khan said, “I’m not aware of this development in Islamabad,” while adding that Anjum Aqeel Khan would know better.

Khan spent part of his term as MNA behind bars after being arrested for his role in the Rs6 billion National Police Foundation land scam. He is currently in hot water with the Supreme Court, which has taken notice of the manner in which an out-of-court settlement on the issue was reached.

His frantic efforts may also be because of the ‘new’ entrants this time around. Where in 2008 the only other strong contender for NA-48, was the PPP, this time around, the Pakistan Tehreek-e-Insaaf (PTI) and Jamaat-e-Islami (JI) will both be fielding candidates after boycotting the 2008 elections. The major candidates in Islamabad include the JI’s Mian Aslam, Javed Hashmi from the PTI, Faisal Sakhi Butt from the PPP and Khan from the PML-N. 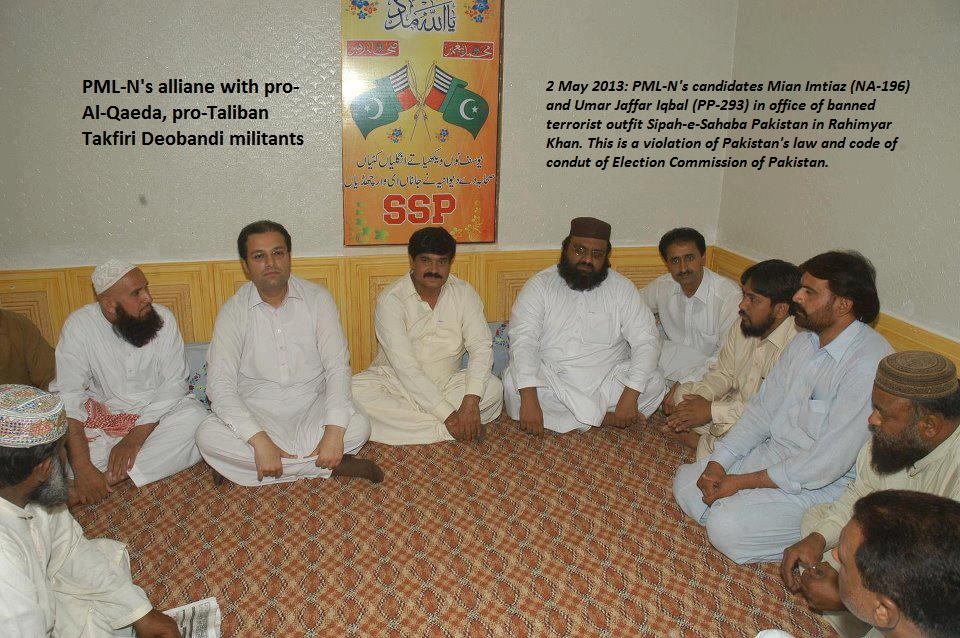 It is clear that PML-N continues to support banned outfit organization, and that it issues tickets to convicted corrupt people.

We wonder why Election Commission of Pakistanor Supreme Court is not taking any notice of illegal and criminal activities of PML-N?

Given that Sipah-e-Sahaba Pakistan is a banned organization, why no notice by care taker government in the Punjab province which is currently led by caretaker CM Najam Sethi?