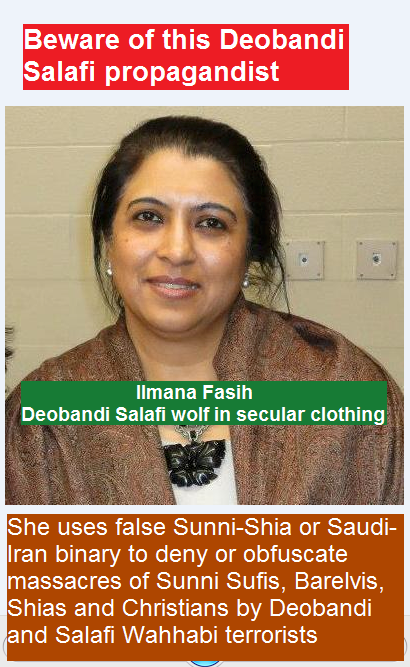 “The hottest places in hell are reserved for those who, in times of great moral crisis, maintain their neutrality.”  ― John F. Kennedy

In the week of Eid, Muslims worldwide were still reeling from the latest atrocities committed by ISIS such as the mass executions of Shia and Sunn Sufis in Iraq at the hands of Wahhabi and Deobandi takfiris of ISIS.  At the same time, fake liberals and Deobandi apologists such as Dr Ilmana Fasih, a Canadian resident Deobandi of Indian origin, were up to their usual tactics of baiting Shia and Sunni Sufi activists on social media with their insensitive and sectarian taunts.

Ilmana is a classic example of the Shia-baiting social media activists who hide their ShiaPhobia and SunniSufiPhobia under a veneer of false neutrality and false victimhood.  Whenever there is an atrocity against Shia and Sunni Sufi Muslims in Pakistan or Iraq or in half a dozen troubled spots around the world, activists like Ilmana spring into action to create a False Neutral position, creating false Sunni-Shia or Saudi-Iran binaries thus hiding that more than 45,000 Sunni Sufis and 22,000 Shias in Pakistan have been killed by Deobandi takfiri terrorists who have also killed hundreds of Christians, Ahmadis, Hindus etc.  They go to great lengths in equating the sustained Deobandi and Wahhabi violence of groups like ISIS/FSA/Taliban/ASWJ-LeJ/Al Nusra/Ikhwan/Boko Haram etc with the sporadic and historical excesses of Shia groups like Hizbullah.

The dishonest tactic of Ilmana to misrepresent the situation in Syria in hackneyed “Shia-Sunni proxy war” terminology is well rebuked by other human rights activists like Syed Ali Abbas Zaidi.  To add, how does Ilmana’s sectarian lens justify that the majority of Assad’s army is Sunni, including his senior generals?

The intellectual fraud of justifying ISIS as a “Shia-Sunni proxy war” is worn out by the fact that the Sunni Kurds also oppose ISIS, FSA, Al Nusra and the various other Al Qaeda incarnationz that are obliquely supported by “activists” like Ilmana.  FSA/ISIS/Al Nusra have destroyed thousands of years of Christain and Druze civilizations and these victims of Salafist and Deobandi terror are finding protection under the Shias of Iraq and Alawites in Syria. 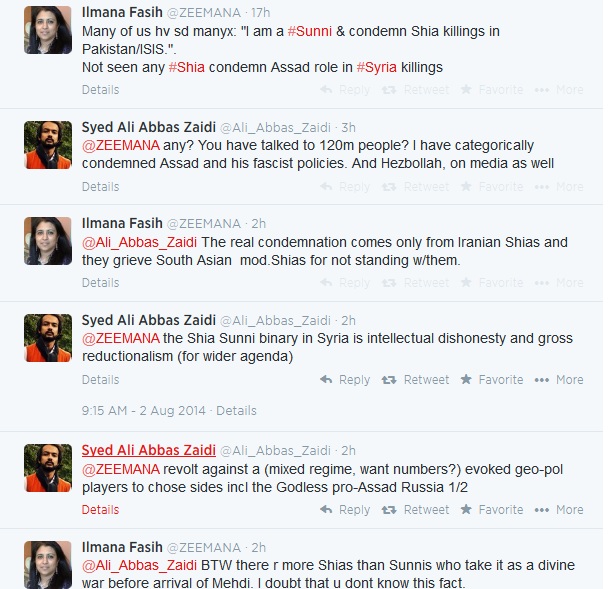 Where Ilmana looses the plot is her victimhood invention which is seldom backed by any concrete evidence. Her use of abusive, sexist and misogynist language to describe the alleged abuse against her only weakens her declining credibility even further.

Such a tactic serves to dilute the outrage against Shia Genocide, deflect attention from the perpetrators as well as subtly blame the victims for their own misfortune.

While Ilmana is a crude and simplistic exponent of this tactic, she represents a significant lobby of pseudo liberal NGO types in Pakistan as well as Canada. She is simply a cruder version of Tarek Fatah who masks his Shia phobia in more refined False Neutral tactics. 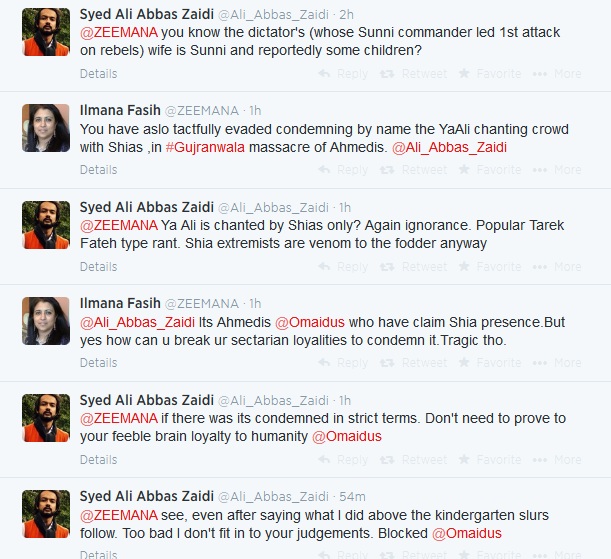 Readers should take note that she is being backed by NGO activist Beena Sarwar and the two are also collaborating on another commercial activity in the form of a North American Radio show.

Normally, it is advisable to ignore such individuals.  However, they are simply the pawns as is obvious from the encouragement given to them by Pakistan’s NGO opportunists.  These opportunists should have selected more intelligent pawns because when Ilmana equates ISIS with Hizbullah, she is not only loosing the plot but also damaging the credibility of her backers.

While ISIS publically celebrates its horrific campaign of murder, rape and destruction of Christain, Sunni and Shias, it is Hizbullah that has emerged as the most credible and effective force against ISIS.  While ISIS has destroyed 4,000 years of shared Jewish, Christain and Muslim civilization in Mosul, it is Najaf Shrine of Maula Ali that is providing refuge to Christains.

Ilmana frequently taunts secular Shia activists with her typical lies.  Her latest tactic involves challenging Shias to condemn Hizbullah for confronting the ISIS and in the same False Neutral Breath, she issues token condemnation of ISIS. Her stance, as always, is both absurd and contradictory. 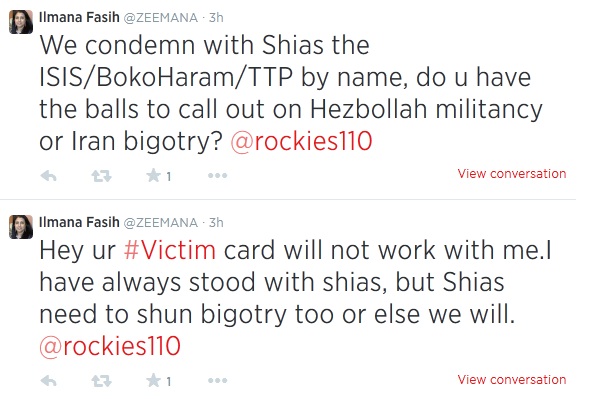 Ilamana’s support and friendship with Rubab Mehdi Rizvi – both of these women deny or obfuscate the Deobandi role in Shia gencoide and Sunni Sufi genocide in Pakistan:

Her stance is akin to someone during World War 2,  who would have have taunted Jews to condemn the Allied Forces for confronting Nazi Germany!

Why should Shias, or for that matter the Christains condemn Hizbullah who are amongst the only forces confronting ISIS which is committing a genocide of Sufis, Sunnis, Shias and Christains in Iraq and Syria.  How can Ilmana claim to condemn ISIS yet also oppose those who are fighting against ISIS!

Last year, activists like Ilmana were the cheerleaders of the Al Qaeda dominated Free Syrian Army that destroyed Syria and whose treatment of the ancient Syrian Christain community is a mirror image of ISIS.  It is no surprise to see such sectarian individuals then descending further into bitterness after witnessing the failure of Al Qaeda in Syria.  The situation in Syria is a civil war and both sides are responsible for the 180,000 deaths.  However, one side, the FSA/Al Qaeda has painted the conflict in sectarian terms and guess where Ilmana stands on this.

After taking a tough stance on the recent pogroms against Ahmadi muslims in Gujranwalla, LUBP faced some rather unusual criticism.  One source was Harry Pasha whose abusive and conspiracy theory laden comments can be seen in his own tweets.  As per “Harry Pasha”, respected and widely read LUBP columnist Rusty Walker does not exist.  This is the same Rusty Walker who has a wide circle of friends and is one of the most open and trusting friends on social media.

Besides writing extensively for LUBP;  his articles on Shia Genocide are a must read; Rusty also shares his diverse music and art tastes with his ever expanding circles of friends.  To see him subjected to the vile abuse and delusions of “Harry Pasha” were disappointing to say the least.  However, none of “Harry Pasha’s” disgusting statements in any way reflect upon Mr. Walker; rather they are a reflection of the psychosis of those making the statements and their backers like Beena Sarwar!

Harry Pasha’s unsubstantiated attacks on Mr. Walker and LUBP have been captured a collections of tweets and public comments and we leave the reader to evaluate the substance, or lack thereof, of these theories. 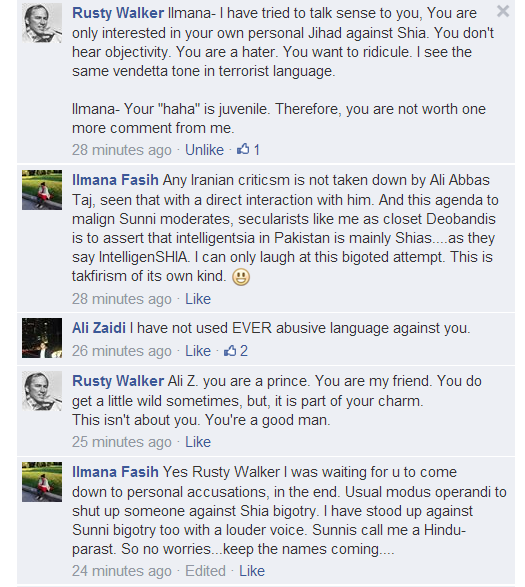 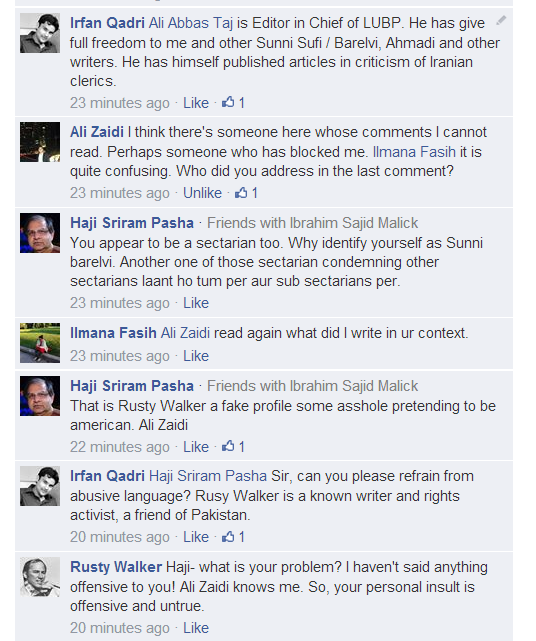 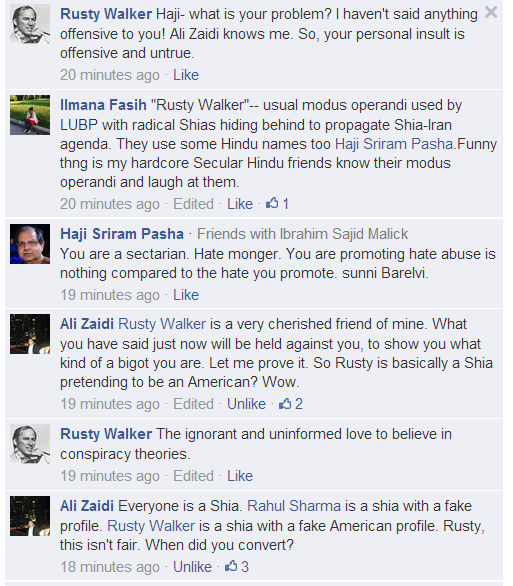 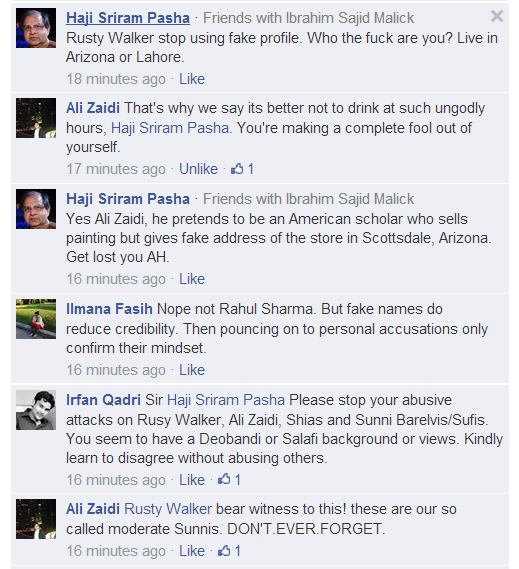 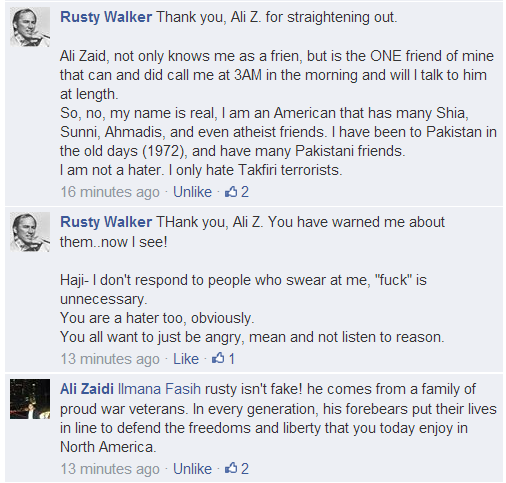 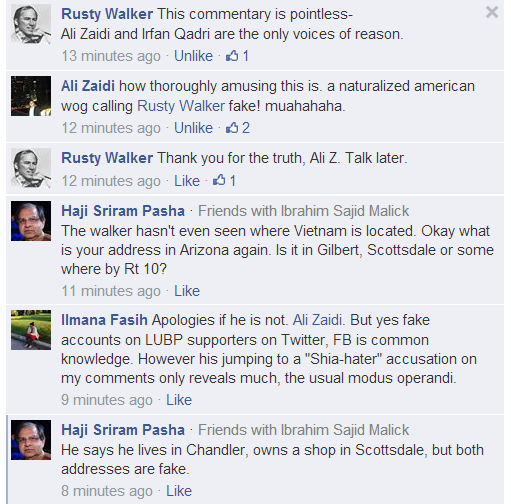 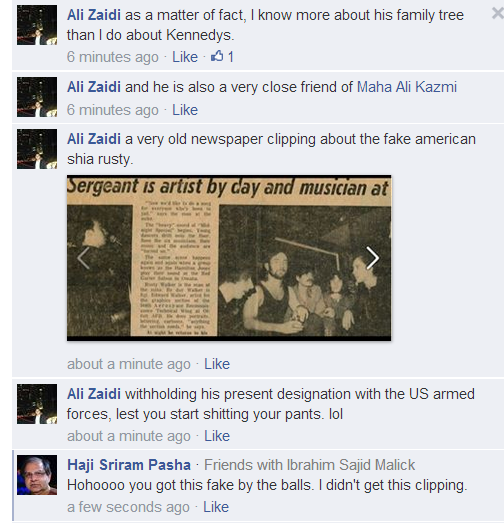 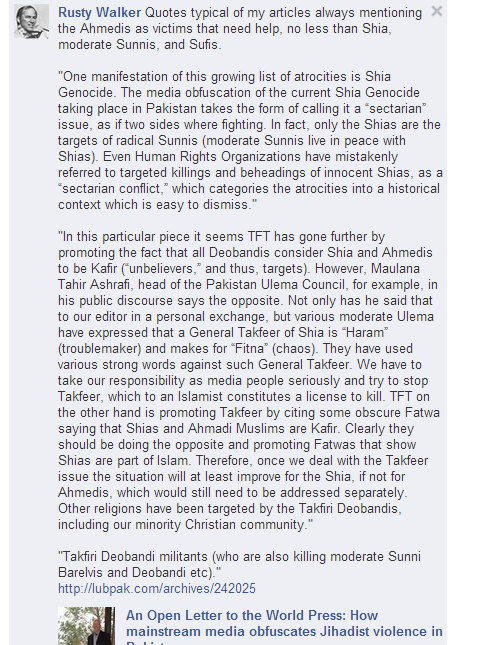 Along with Harry Pasha, Ilmana Fasih is another social media “activist” whose petty, sectarian and often fictional allegations against LUBP deserve a response.  Failing to make a proper argument to support her sectarian agenda, Ilmana often makes up things.  This is obvious from her social media discussions and her distasteful attempt to use Rusty Walker’s Eid Greeting wall as a venue for her petty  sectarian digs. 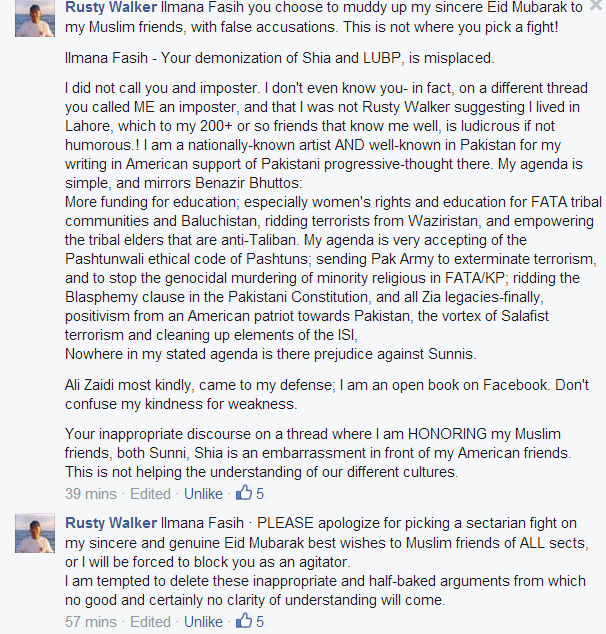 While Harry Pasha and Ilmana Fasih’s activism is largely inconsequential, it is important to understand their tactics and the lobby that supports and entertains them.  The use of abusive terms and bizarre conspiracy theories is not just a reflection of Ilmana and Harry Pasha but also of their backers and supporters on social media.  When faced with a counter argument, these types can only fall back on abuse and absurd conspiracy theories. 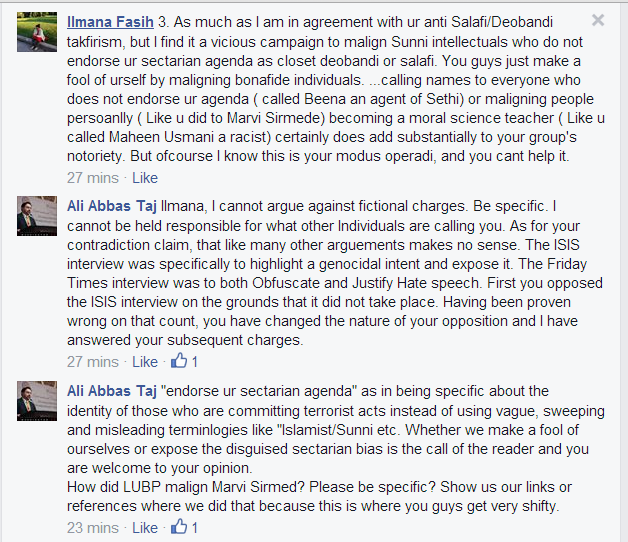 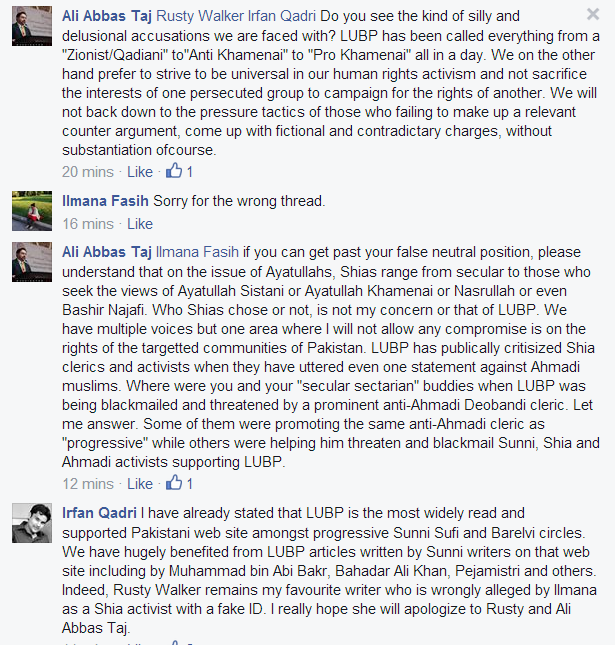 This post serves to highlight that instead of championing the cause of those facing Genocide, the Ilmana Fasihs, Tarek Fatahs, Beena Sarwars etc are more interested in their selective and sectarian causes.   Their activism is geared towards creating False Neutral positions in the time of Genocide and as such, they are an indirect party to Shia Genocide.  The positive development is that intead of relying on these pseudo liberal opportunists as was the cause some years back, activists from LUBP, Roshni and Khudi are developing their own discourse.