Home  »  Original Articles   »   Karachi Airport: Did the Terrorists Achieve their Objective? – by A Z 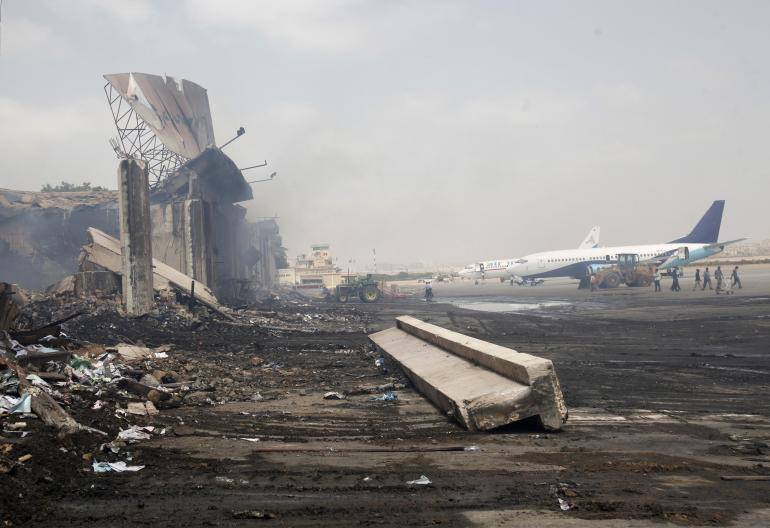 There can be no two opinions in that the Pakistan Army’s commandos were able to mount a valiant, swift, and effective operation in the face of Karachi Airport’s takeover by the TTP terrorists. Having said that, I would like everyone to take a deep breath and think for a minute.

Contrary to what Chauhdry Nisar is claiming, the terrorists achieved what they wanted. That is, to gain the maximum attention with the minimum in effort, loss, and carnage. Of course, ten armed men were not supposed to take over the airport or to hold it hostage. The point was to cause terror to further create dissipation about Pakistan’s present state and its future. The people they killed were not the targets; they were collateral damage. The attempts to blow up a couple of planes were mere tactics. To terrorize 180 million Pakistanis was not the point as their existence is already shrouded in fear. It was also not their real point to frighten the Government of the country; it is already doing exactly what the terrorists want as did unfailingly the PPP’s dispensation before it. Their real target was Pakistan, to further undermine any confidence the world may have in Pakistan’s ability to sort out its affairs. And the world press and TV have been trumpeting the story ever since.

Most of the country’s media and pundits do not even hint at the damage this attack has already caused. Sri Lankan cricket team attack of 2009 indefinitely disrupted international cricket in Pakistan. Similarly, the Karachi Airport attack has done long term damage to business and economy of Pakistan.

In truth, it is doubtful these ten men wanted to achieve a lot more than what they did. Certainly they were a long way off from doing much more. None ever got close to blowing up a plane, for instance. From their perspective explosives and killings were solely tactics. Their goal was to reinforce the world’s despondency about Pakistan, and in that they have succeeded. See the world coverage of the event and that is exactly what is happening right now.

WHAT BROUGHT US TO THE PRESENT STATE OF AFFAIRS

Our State and Politics have abetted the extremism, which breeds terrorists, for far too long. (LUBP has written about his in some detail, the first Jihadist military marriage was the use of tribal mercenaries in 1947.) The Islamism agenda has been moving forward for nearly seventy years and now threatens the State and the constitution of Pakistan. Every ruler and each government of the country since ZAB shares the blame in varying degrees. Bhutto, of course, was the inceptor by declaring Ahmadis non-Muslims and giving in to Mullah’s demands. He had the unique opportunity to rebuild Pakistan as a modern Muslim state but, for selfish reasons, chose to pander to Mullahs and the feudal. Zia was a zealous ideologue and remains the single biggest culprit responsible for the state Pakistan is in today. The “democratic governments” that followed Zia were compromised and sent packing at the whims of the military establishment. Benazir Bhutto never murmured about Pakistan’s policy in Afghanistan when she held the reins. For a person with legendary verbosity, she also never uttered or wrote a word against it while she was out of government(s). In fact, Taliban were formed on her watch and her senior-most cabinet member, Naseer Ullah Babar, is on record having repeatedly claimed the credit for doing so and calling Taliban as ‘our kids.’ Benazir Bhutto also freed hundreds of the SSP militants and formed a joint government with the SSP in the largest province of the country. Musharraf embodied Army’s wisdom, which lies in fostering Jihadists, except those who turn against their benefactor. When Benazir Bhutto returned to Pakistan she was assassinated with the connivance of the pro Taliban elements in the ISI who feared that Benazir Bhutto had learnt her lessons and will follow an agenda –including seeking peace with the neighbours- that will rule out the need for Jihadists. These same elements managed the Lawyers movement to weaken the elected government of Zardari by bringing back PCO judiciary and forcing Zardari to compromise further. Zardari gave a free hand to the terrorists in exchange for his team’s personal security during his five years. Hence, not even a single office-bearer or leader of the PPP was assailed during the five years they were in power, exceptions were Shia politicians who were killed simply for being Shia especially in the KPK. Then re-enters Nawaz who –with people like Chaudhry Nisar by his side- is a disciple of Zia and has a genuine soft corner for Islamist extremism. Last but not the least, Imran Khan, the main leader of the opposition, is nothing more than a Taliban apologist. 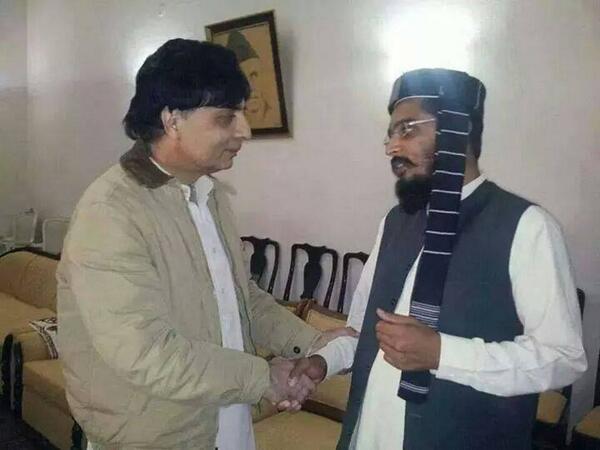 This is a picture of Pakistan’s current Interior Minister, Chaudhary Nisar Ali Khan’s friendly handshake with Muawiya Tariq, a high ranking leader of the banned ASWJ-LEJ-TTP

Our politicians help the terrorists when they use fear as a campaign tactic. The press helps every time it lends them legitimacy and gives coverage to their advocates. And when it is threatened it is terrified, and increases the effects of their terror.

To begin with, we must dispel all notions of negotiating with the terrorists, misconceived as they are. Terrorists and states negotiate differently. Terrorists cannot be negotiated with because they don’t view negotiations as a long term peace process, but as a short term means of achieving their latest demand. Terrorists escalate a conflict to achieve leverage for their latest demand. They don’t seek a final settlement. There can be no final settlement because that would mean the end of terror and, thus, their own end. The terrorists know how to disrupt the ‘negotiations’ at a crucial moment and take the peace process as their hostage. Negotiations work when both parties view them as an end to the conflict, rather than an extension of it. Can anyone even define what the ‘conflict’ here is? Terrorists treat a willingness to negotiate as a sign of weakness. Negotiations are their punctuation marks between suicidal bombings and attacks like the one we witnessed at Karachi Airport. The negotiations do not end or even interrupt such terror, they perpetuate it. Thanks to the chimera of negotiations, the TTP has already secured the release of many of its terrorists without ever –even for a transitory moment- having to abandon terrorism. The negotiations have merely allowed Fazlullah to score some easy victories that will let him coast along as a terrorist leader.

Pakistan wants to and must end the conflict, but the Taliban want to keep it going. The mayhem has been good to them. The teenager who has been raised in deprivation and educated and indoctrinated by the Madrassas set up by their sympathizers believes in dying for Taliban. Peace has nothing to offer Taliban. It has nothing to offer their cohorts. What can we offer them? It is just the bait in the trap that keeps power flowing into their veins.

The day of reckoning is here. The subject of terrorism in Pakistan is more complex than it appears, and understanding its various causes and effects are vital for understanding how to best deal with it. The change has to start with the Army. Till such point it is prepared to act against only those Jihadists who fight the Army or refuse to do its bidding, it will never elicit the will and support from the political government. Simply because that leaves the flanks of any political government totally exposed to the ‘good extremists’. It is time we all come together and fight fire with fire instead of simply rolling over and accepting terrorism. As people, we must remain steadfast. Our job is to think critically and rationally, and to ignore the cacophony of other interests trying to use terrorism to advance political careers or increase a television show’s viewership.

Yes, the scale of the militants’ operations, reach, and aims makes them very difficult to counter. But we must halt the spread of their views, deny them political oxygen, and strip away the legitimacy that allows them to operate. There is no silver bullet. The most powerful weapon in countering the radicals’ violence is the determination of 95 per cent of Pakistan’s 180 million people. Instead of sowing doubts in their minds, we must fight to keep it, and to use it, if we are, one day, to be free of fear and violence.