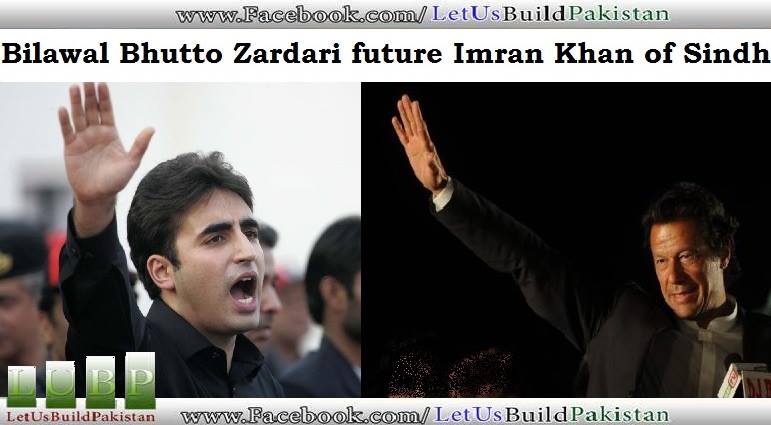 The recent slander against LUBP by Bilawal Bhutto Zardari clearly shows a series of uncomfortable U-turns ahead.  MQM’s relatively strong stance against TTP-ASWJ has the ISI and establishment wondering. They need their own man to usher in Deobandi TTP-ASWJ domination of Sindh through the back door. Without even realizing it, Bilawal Bhutto Zardari has applied for the job to be the Imran Khan of Sindh and the next Chief Minister. With the way things are progressing, Takfiri Deobandi Aurangzeb Farooqi and Ahmed Ludhyanvi will be the real rulers of Sindh with CM Bilawal at their service, a Punjab like arrangement.

Sounds unrealistic? Consider this, ASWJ-LeJ-TTP issues threatening letters to Bilawal while continuing their murderous attacks on Sunni Barelvis, Sufis, Shias, Hindus and Christians as well as media groups like Express Media groups. A senior Express TV anchor is attacked. Instead of taking action against ASWJ (urban face of the Taliban) leader Aurangzeb Farooqi, what does Bilawal do? He lashes at at the most anti-Taliban website, LUBP. Simultaneously, ASWJ also attacks LUBP!

The people attacking LUBP in the wake of the unfortunate attempt on the life of Raza Rumi are both ASWJ (Takfiri Deobandi Taliban of Sipah Sahaba LeJ) and Bilawal Bhutto Zardari.

The ISI has no problems in Punjab and KP, the TTP-ASWJ takfiris are firmly in control. The Baloch nationalists are very few in number and are being ruthlessly killed. Sindh presents an interesting problem for the Talibanization of Pakistan, it may be the last place in Pakistan that is not completely controlled by the Takfiri Deobandi proxies of the ISI. The people of Sindh with their rich Sufi tradition of tolerance seem to be resistant to the domination of the Deobandi and Salafi/Wahabi establishment. It is hard for the ISI to kill Sindhis en mass like they were doing under General Zia ul Haq, the patron saint of the Takifiri Deobandis. There are too many urban areas and too many people who will upload those pictures and videos on social media. This type of killing is now reserved exclusively for Balochistan, Parachinar or Gilgit Baltistan, where they can control the information. Enter Bilawal Bhutto Zardari the “Manchurian Candidate”.  The new Imran Khan of Sindh, the establishment can protect the likes of Aurengzeb Farooqi in Karachi by putting pressure on local administration, but to really make the youth and masses pro Taliban you need a charismatic figure like Imran Khan.

The PPP leadership continued to tolerate the mass murder of the Shia Hazaras in and around Quetta and did nothing to hold to account its chief minister and his cabinet till a media spectacle developed following yet another tragedy when thousands of Hazaras staged a protest sit-in with more than 80 coffins in freezing rain and numbing cold. This public embarrassment also didn’t immediately move the PPP and it took several days to respond when finally the prime minister arrived to console the loved ones of the victims of mass murder and beseeched them to bury their dead and to disperse.

Sindh, the land of Bhittai and Sarmast, is an equally sad spectacle. That the obscurantists are capitalising in the rural areas on PPP’s ineptitude, misdirected priorities and outright propensity for corruption is evident in the kidnapping and forced conversions of defenceless young Hindu women as also attacks on Hindus and other minorities.

Sindh’s HQ Karachi presents too sad a story for words. Yes, the mess in Karachi isn’t only of the PPP’s making with the MQM and the military’s intelligence services contributing in greater or at least equal measure but this cannot be an excuse for the PPP’s inaction.

All the young PPP leader needs to do is to send for the figures of Shia professionals killed by the LJ-SSP (Sipah-i-Sahaba Pakistan) over the tenure of its last and incumbent governments; ask his ministers and officials about the measures taken to crack down on sectarian death squads operating in the city. But frankly I don’t think this will happen.

The ISI needs economy of Karachi for obvious reasons: more than half of nation’s revenue comes from Karachi. Bilawal with his cosmetic approach to extremism is their best bet.

Bilawal has never said anything against Afghan Taliban. He has never said a word against ASWJ Sipah-e-Sahaba, the urban face of Pakistani Taliban TTP. He cannot control the ASWJ-TTP in Karachi. He cannot arrest the office bearers of Sipah Sahaba ASWJ-LeJ living in Karachi and other parts of Sindh. He has failed to stop office bearers of Jamat Islami of Sindh from sheltering Al-Qaida members in their houses. He has not said a word against military-run ASWJ training camps in Balochistan. He ignores that PPP leaders including Amin Fahim and Qamar Kaira collaborate with the ASWJ for gaining vote bank. He ignores that PPP leaders are involved in forced conversion and kidnapping of Hindu girls. He has failed to provide ration and shelter to the people of Sindh, which is the fiefdom of his family since 1971. So what does he do? He distracts and fools the masses by accusing the Punjab government of the same incompetency that his party faces in Sindh. In fact, he spoke against Jamshed Dasti, the known sponsore of ASWJ-SSP in Muzaffargarh, only after Dasti had left the PPP. Bilawal remains quiet on PPP leaders alliances with ASWJ while he is quick to issue show cause notices to Faisal Raza Abdi, the only strong voice against Sunni Barelvi genocide and Shia genocide in Pakistan’s parliament.

Does Bilawal care for minorities? No, because PPP leaders are assaulting minorities in Sindh, kidnapping hindu girls and helping mullahs who forcefully convert them….is he doing anything against those PPP lawmakers who break the law.

At least Faryarl Talpur and Asif Ali Zardari tired their best to do some good in Sindh in the last government. Instead of tweeting from the hip Asif Ali Zardari managed the affairs in a reasonable way and kept kept MQM and ANP coalitions intact. Under Bilawal, tutored by Sherry Rehman lobby, coalitions have collapsed and Karachi is being surrendered to the Taliban. Asif Ali Zardari despite insurmountable odds and alleged corruption made the historic Pakistan Iran gas pipeline agreement, but Bilawal is only found to recylce the establishment preferred Iran-Saudi proxy war crap.

The current Deobandi and Salafi radicalization of the Sindhi youth will benefit the establishment in many ways. It will kill the Sindhi nationalism, which keeps popping up every once in while, it will ensure the long term safety of their takfiri Deobandi strategic assets and it will have converted the secular minded PPP into another PTI. Most important of all it will make everyone “Muslim” not Pashtun or Baloch or Sindhi, making the country more controllable as a Takfiri Doebandi country.

The ISI and the establishment are on a singular track to Deobandize Pakistan, they only choose this path because other forms of Islam such as Sunni Barelvi/Sufi and Shia are accepting of diversity. Diversity is the enemy when the military establishment desires to rule with an iron fist rule (pulling the strings). So betting on Takfiri Deobandis is the best option because they exclude everyone else. Conveniently Saudi Salafi rulers are happy to bankroll the emergence of the Takfiri Deobandi State of Pakistan.

People have accused LUBP of being the foot soldiers of PPP or various religious sects. The Shia religious parties accuse LUBP of being Ahmadi agents and the Sipah Sahaba accuse us of being agents of America and Iran. The editorial team of LUBP sees all these accusations as medals for speaking the truth.

The latest of such medal comes from Bilawal Bhutto Zardari jointly with Deobandi Sipah Sahaba ASWJ, condemning our right to free speech. We shall only side with the truth, we wish good luck to Bilawal Bhutto Zardari to conduct annual events in Nodero jointly with Sipah Sahaba. Just beware that at some point a (sub khariji) group might split from the “nice” Sipah Sahaba whom you and Kaira (or Amin Fahim) might be friends with and stop you from going to Nodero where your mother and grandfather’s grave site is because it may be considered bidda’ and blown up.

Takfiri Deobandi Taliban, like snakes, bite the hand that feeds them. Pro Taliban Army Generals and pro Taliban Fake Liberals are not immune from their venom.  As someone whose generations sacrificed for Shaheed Mohtarma Benazir Bhutto and Shaheed Zulfiqar Ali Bhutto, it pains me to see that Bilawal Bhutto Zardari is becoming the agent to fulfil the legacy of General Zia and General Hameed Gul: Pakistan does not need more than one political party or more than one identity. That is the vision of Generals: Fascist Deobandism with no room for diversity or dissent. 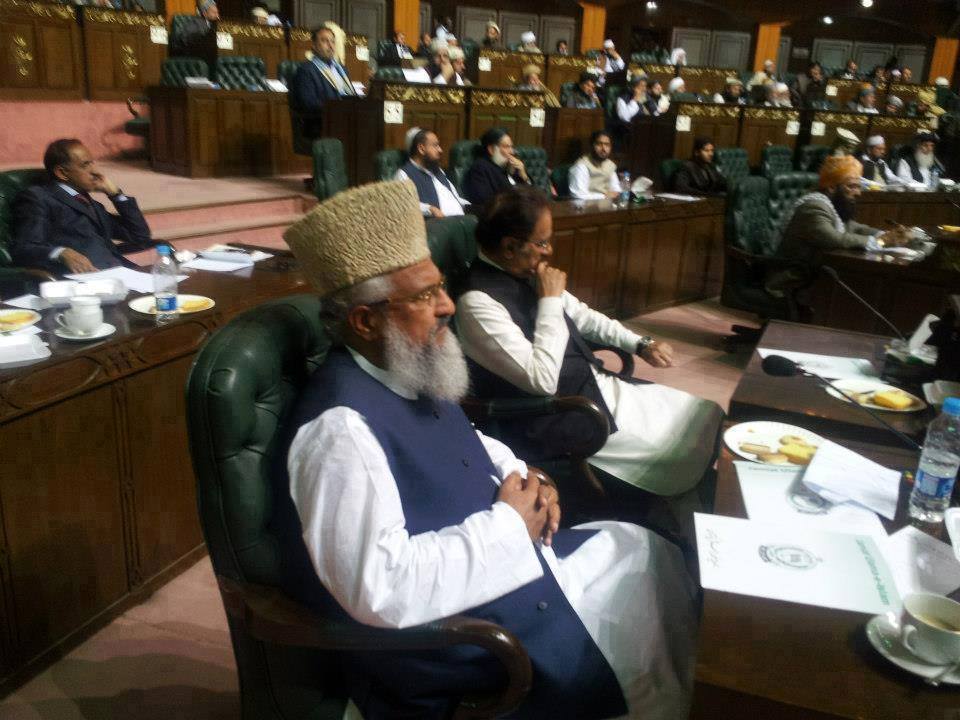 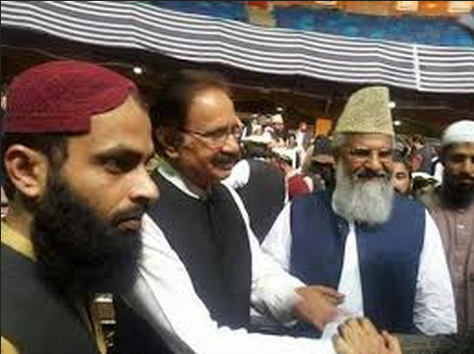 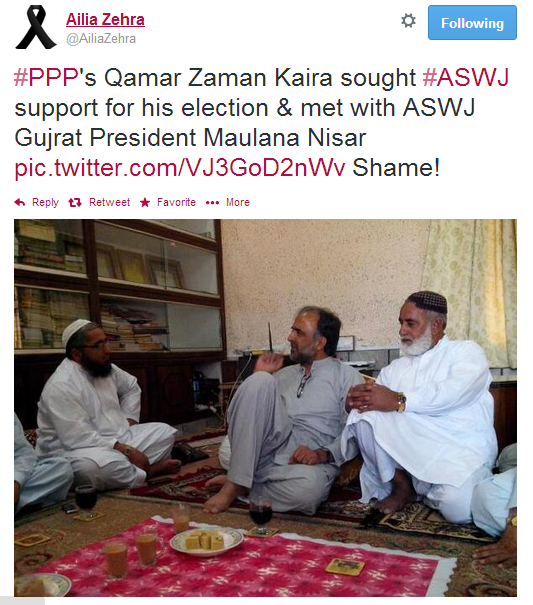