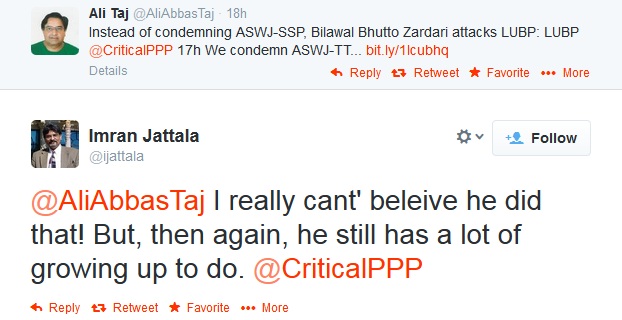 TWEETING-from-the-hip Bilawal Bhutto Zardari has warned that if anything were to happen to him the Punjab government would be held responsible, as he went public with a threat issued to him by the deadly Deobandi Lashkar-i-Jhangvi.

There can be no two opinions on the need to ensure BBZ’s security. Although they may use a different nomenclature for operational reasons, the coalition of terrorist groups in the country would have him at the top of its hit list as it did his slain mother. He speaks the same language about the terrorists his mother did.

To her last day, Benazir Bhutto remained defiant and determined to stand up to the terrorists regardless of the threat they posed. This public stance was admirable, given that she survived a lethal assassination attempt in October 2007 as she returned home from exile.

But a few weeks later, the terrorists succeeded and killed her in December of the same year. It was largely her assassination and the horror and anger at it that delivered her party a win at the polls early the following year.

BBZ was a grieving son and a student abroad then so there might be gaps in his knowledge of what happened once the PPP set up a coalition government at the centre and three provinces. His political mentors and coaches may have kept the whole story from him.

His jibe at the Punjab government after he received the latest Deobandi LJ threat was aimed at drawing attention to what’s now one of the best-known secrets in the country: that the Punjab government has cut deals with the militants via some of its own party leaders, bureaucrats even senior police officers to keep the province safe.

So the PPP leader was justified in targeting the Punjab government as over its entire past tenure and the current one the PML-N has largely sought to secure its support base against terror attacks. The quid pro quo, the PML-N’s detractors believe, has been no action against, and allowing safe passage to terrorists.

While only at the helm in the province, it could make the argument, even if somewhat warped, that it was only responsible for the life, limb and property of the citizens in that province, the PML-N now heads the federal government also and, therefore, has an expanded area of responsibility. So far in dealing with terrorists it has betrayed few signs it’s aware of this fact.

This has been the picture in Punjab, and BBZ seemed aware of it. However, wouldn’t he benefit from the knowledge of what happened elsewhere such as in Balochistan and Karachi in particular and the whole of Sindh in general when his own party was in power?

He definitely would. In fact, had he been aware of how appalling his own party’s record against the LJ was, he perhaps wouldn’t have criticised the PML-N. It is time BBZ put his reference material to good use.

All political parties have research and reference facilities. All BBZ needs to do is ask one of his researchers to pull out the file chronicling the open field given to the LJ by the PPP-led Balochistan government to carry out a pogrom against the Hazara Shias.

Not only were hundreds of Hazara Shias slaughtered in dozens of incidents, it was widely believed that the PPP chief minister Nawab Aslam Raisani’s hometown of Mastung served as a citadel of the LJ and they operated freely from there.

The PPP leadership continued to tolerate the mass murder of the Shia Hazaras in and around Quetta and did nothing to hold to account its chief minister and his cabinet till a media spectacle developed following yet another tragedy when thousands of Hazaras staged a protest sit-in with more than 80 coffins in freezing rain and numbing cold.

This public embarrassment also didn’t immediately move the PPP and it took several days to respond when finally the prime minister arrived to console the loved ones of the victims of mass murder and beseeched them to bury their dead and to disperse.

Sindh, the land of Bhittai and Sarmast, is an equally sad spectacle. That the obscurantists are capitalising in the rural areas on PPP’s ineptitude, misdirected priorities and outright propensity for corruption is evident in the kidnapping and forced conversions of defenceless young Hindu women as also attacks on Hindus and other minorities.

Sindh’s HQ Karachi presents too sad a story for words. Yes, the mess in Karachi isn’t only of the PPP’s making with the MQM and the military’s intelligence services contributing in greater or at least equal measure but this cannot be an excuse for the PPP’s inaction.

All the young PPP leader needs to do is to send for the figures of Shia professionals killed by the Deobandi LJ-SSP (Sipah-i-Sahaba Pakistan) over the tenure of its last and incumbent governments; ask his ministers and officials about the measures taken to crack down on Deobandi sectarian death squads operating in the city. But frankly I don’t think this will happen.

In a country where attitudes, policies towards religious militancy are dominated by fear (PML-N), ideological affinity and unfounded, misplaced beliefs/theories (Pakistan Tehreek-i-Insaf), outright ineptitude and ignorant self-righteous indignation (PPP) and by disastrous strategic depth and low-cost warfare on enemy soil concepts (military), why should anyone be surprised at the daily dose of murder and mayhem that have come to mark the lives of almost all Pakistanis?