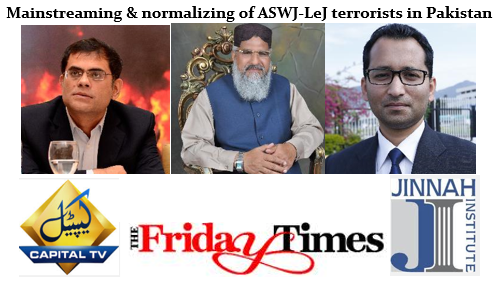 On 4 October 2013, head of a banned terrorist outfit led a rally in Islamabad where anti-Shia, anti-Ahmadi slogans were rampant; moments later he joined a talk show on Capital TV. How should we read this?

The anchor of Capital TV who invited Ahmed Ludhianvi Deobandi of banned terrorist outfit Sipah-e-Sahaba (ASWJ-LeJ) to his talkshow happens to be reporter of notorious The Friday Times blog, and is a personal friend and colleague of its editors Najam Sethi and Raza Rumi, the same people who frequently publish uncritical promotions of ASWJ-LeJ’s leaders Aurangzeb Farooqi, Ahmed Ludhianvi etc in The Friday Times and also in Sethi’s Geo TV show Aapas ki Baat. Also, it is a fact that both Shahzad Raza and Raza Rumi, along with Ejaz Haider (notorious for his hate remarks against Shia Hazaras of Quetta) and Nasim Zehra (the Shia genocide denialist), are senior anchors at Capital TV. 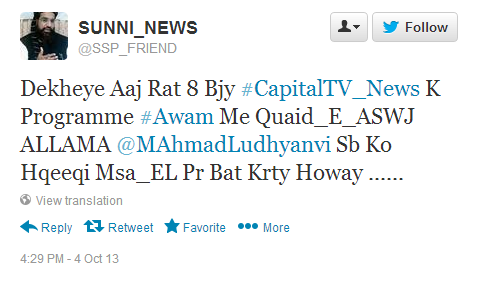 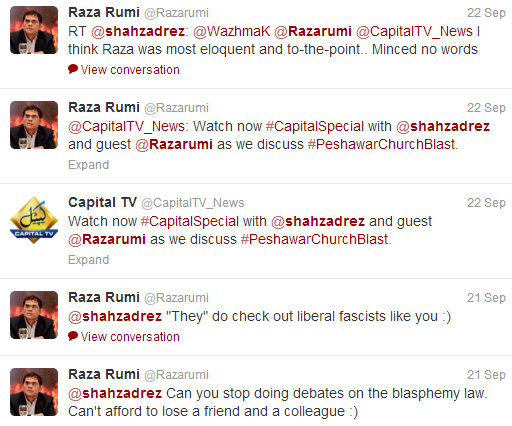 This column by Saba Imtiaz shows how urban elites are complicit in uncritical promotion and mainstreaming of ASWJ (Sipah-e-Sahaba): https://lubpak.com/archives/285193

Video: Najam Sethi was the first main anchor who aired live propaganda of Ludhianvi on his Geo TV show: https://lubpak.com/archives/73439

As a matter of fact, Najam Sethi,  former Caretaker Chief Minister of Punjab was the first major TV personality to parade the Sipah Sahaba Taliban on TV a day after they killed dozens of Shia Muslims in Chilas after taking them off a bus and checking their backs for flagelation marks.

Najam Sethi and his pro-establishment proteges (Muhammad Shehzad, Shahzad Raza, Raza Rumi, Ejaz Haider etc) are woking on the ISI and Saudi agenda to Deobandize and Wahabise Pakistan from the tolerent nation of which was created by Mohammed Ali Jinnah (Shia Muslim) and Sir Zafarullah Khan (Ahmadi Muslim) among others to a sheep farm for those that opposed the creation of Pakistan. These were the Islamofacists who used to call Quid e Azam, Kafir-e-Azam. The childern of those that did Takfir of Quid e Azam are killing Shia Muslims in the streets of Pakistan today. Yellow journalists like Raza Rumi and Najam Sethi and their TV channels like Capital TV and Geo TV are promoting the killers as messengers of peace.

This was not the social contract that Paksitan was created for. The Christians who have unparalled expceptional services to Pakistan cast the deciding vote in favour of Pakistan and against the same Islamofacists that Raza Rumi promtes, to create a new nation where the rights of all minorities of India shall be protected. Now the same Christians are being slaughtered in their places of worship. Sunni Barelvis and moderate Deobandis too are being killed in thousands at the hands of Takfiri Deobandi terrorists of ASWJ-LeJ.

These yellow journalists are destroying the values and fabric that made Pakistan.  These people have no shame, no scruples as the twitter exchange shows they are immune to protests by the victims of Shia Genocide. It can only be concluded they are part of the Shia Genocide package and agents of the killers. The documentation of their promotion of hate and murder groups is growing and their Nurenburg Trials is not far away. 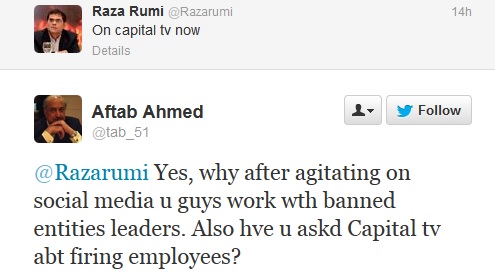 Some fake liberals who themselves promote ASWJ’s Ludhianvi in their magazines and TV shows are condeming Capital TV. Remind us of Muawiya. 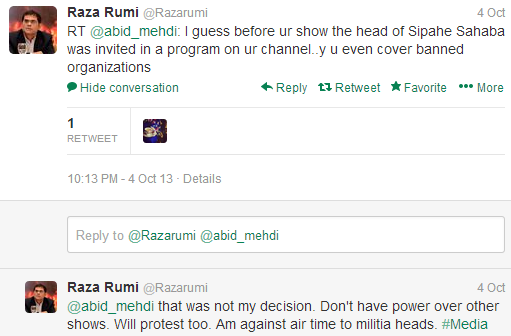 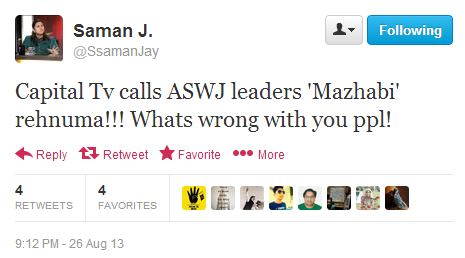 Don’t criticize fake liberals who promote and mainstream ASWJ terrorists. They will threaten you with legal cases, hurt your relatives.

We condemn Capital TV, its management and senior anchors on uncritical promotion and mainstreaming of ASWJ Deobandi Khawarij terrorists.

Every general, journalist, judge and politician who promotes ASWJ-TTP terrorists is complicit to Shia Genocide in Pakistan. 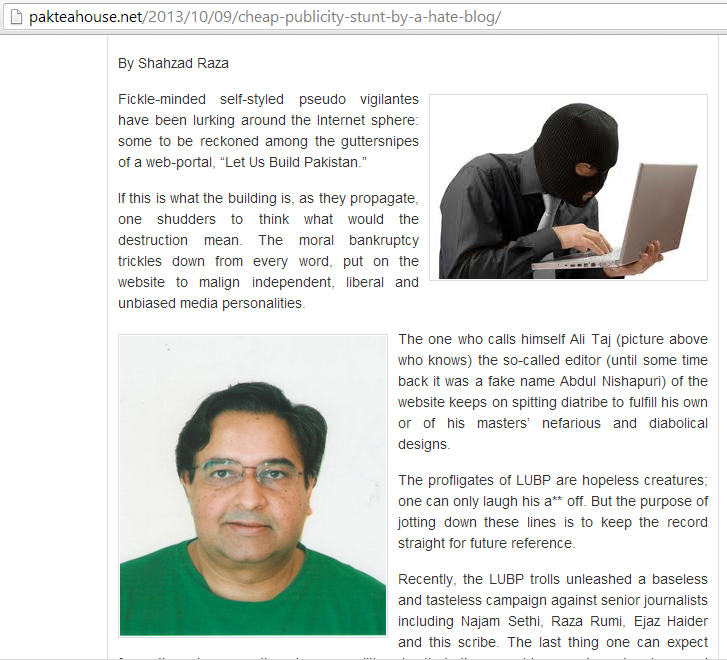 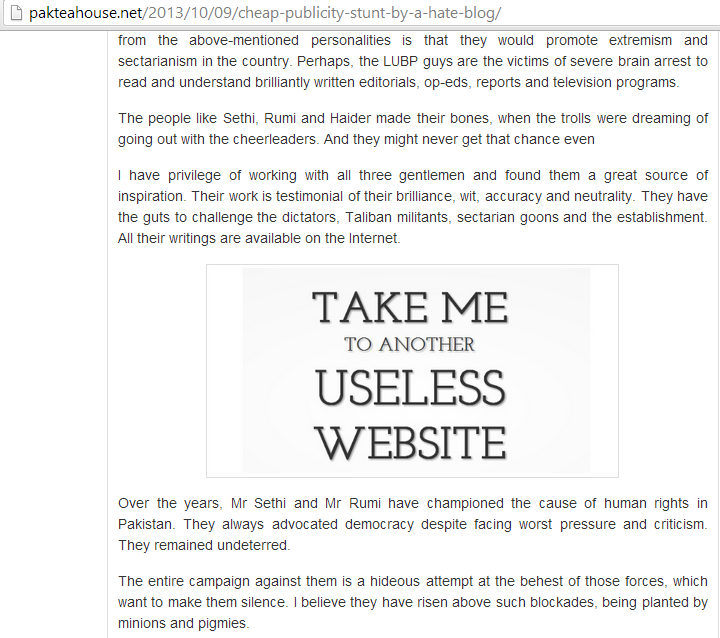 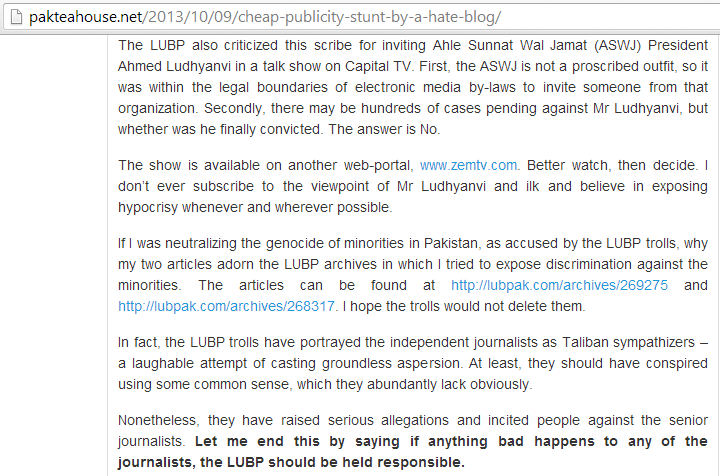 PMA United StatesGoogle ChromeWindows says:
October 9, 2013 at 11:44 pm
Shahzad Raza Sahab:
.
Sipah-e-Sahaba, a franchise of the Deobandi Jamiat-ul-Ulema-e-Islam, is a well known terrorist group that in 2002 under the pressure from the USA was banned by the then military ruler General Pervez Musharraf. The group reemerged under the name of Ahle-Sunnat Wal-Jamaat Pakistan. Maulana Mohammad Ahmed Ludhianvi, the current president of the organization was recently invited by you on your TV show. My question to you is: Did you confront the Moulana about the terrorist acts committed by his organization against the Shi’a community in Pakistan? Thanks.
.
(For those not familiar with the renaming of the Sipah-e-Sahaba, another older Barelvi group as well operates under the name of Ahle-Sunnat Wal-Jamaat and the two groups should not be confused. Sipah-e-Sahaba was originally organized in 1980 by the Zia regime with the help of Saudi funds and American blessing immediately after the overthrow of the Shah and Shi’a-clergy take over of Iran in 1979. The purpose was and remains to debase the Shi’a religious community in Pakistan. Apparently the editors of LUBP are Shi’a sympathizers and as such are upset with the Najam Sethi group for inviting Ludhianvi Moulana on their TV show. Pakistan is in the grip of Saudi-Iranian proxy war that shows up on the electronic media as well.)

Khurram Abbasi United StatesGoogle ChromeWindows says:
October 11, 2013 at 11:40 am
@Barefoot Bookworm, I read both pieces on PTH and LUBP. Atleast LUBP provides the links of specific criticism which not here on PTH. Good luck with that. I think their criticism of Raza bhai is too harsh. At the same time, Ejaz Haider and Sethi are old establishment journalists who mix truth and lies effectively. Read Asad Rehman’s interview to know the truth about Sethi and how he probably betrayed London group in support of Baluchistan. As for Ejaz Haider, read his article of Malabar Cave and Dr. Taqi response “Silence of the Liberal Lambs”. I think LUBP biggest complaint against Raza bhai and Sethi is why they publish interview of hate monger like Lashkar Jhangvi Ludhianvi. And why Raza bhai promote Tahir Ashrafi who say such hateful things against Ahmadiya and Shia. Probably Raza bhai under lot of pressure.

bjk United StatesMozilla FirefoxWindows says:
October 13, 2013 at 11:42 pm
From what I have seen of the LUBP site, I like it and think it has more integrity than this site.