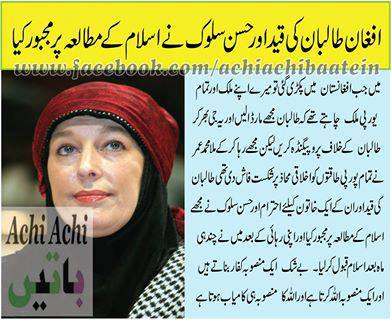 Editor’s note: LUBP wishes to commend Dr. Farhat Taj’s brave effort to expose the liars in the media that promote and humanize the Taliban and other Deobandi Wahhabi terrorists to further Deep States’ agendas and discourse.   It’s not only Urdu media, elements of the English media such as The Friday Times blog by Najam Sethi shamelessly promote the murderous agenda of Punjabi Taliban of Sipah Sahaba Lashker e Jhangvi  currently operating as ASWJ-D ( ahle sunnat wal jamaat deobandi) in more subtle ways.

Fake stories are planted in Urdu newspapers to lure young tribesmen into terrorism. It has nothing to offer but only death and destruction for FATA and its people

Some people in Waziristan have requested that I write about a column published in the Urdu daily Mashriq on January 2, 2011. Following is the summary of the column, titled ‘Hakeemullah Mehsud’s lover’.

A senior female French journalist contacted a tribal journalist form Waziristan via Facebook. The French lady requested him to help her with some research on Waziristan. The tribesman agreed and the French journalist landed in Pakistan. During their meeting, the French lady said that she was madly in love with Hakeemullah Mehsud, a Tehrik-i-Taliban Pakistan (TTP) commander and that she wished to marry him. She also said that one of her friends wanted to marry Qari Hussain, the Ustad-e-Fidayeen or master trainer of suicide bombers in the army of the TTP. She further said that another four of her friends also wished to marry some Taliban commanders from the TTP. Out of utter surprise, the tribal journalist wondered how that could be because people in Europe believe that the Taliban are brutal beasts. The lady blatantly responded that, in actuality, the Europeans are the brutal beasts, not the Taliban. She said that no one in Europe had the courage to speak the truth when it came to the Taliban. Everyone who had the opportunity to closely interact with the Taliban had been deeply impressed by them. Take, for example, the lady journalist, Mariam, who had been imprisoned by the Taliban. She became so impressed by the Taliban that she converted to Islam. People who care so much for their prisoners would certainly be much kinder towards their wives and children. In Europe, the family system has collapsed. Children do not know who their fathers are. Wives have no clue about the whereabouts of their husbands. My friends and I have studied Islam and now we wish to know about the Taliban. This is, therefore, why we wish to marry them. We will burn our French citizenship documents in front of the media in Waziristan to terminate our ties with our native land. We will become tribal women forever. The lady also said that she was madly in love with Hakeemullah and would marry him come what may. “What if Hakeemullah refuses?” asked the tribal journalist. The lady’s response was: “The heart speaks to the heart”. The tribesman warned her that, under Pakistani law, she could not go to Waziristan. The lady said she would plead to Allah to punish Pakistan for having laws that stood in the way of her and her friends’ marriages with the Taliban. The lady was crying uncontrollably. Finally, the tribal journalist, who had full sympathy for the woman but had no means to help her, agreed to spread her story through a newspaper column.

The tribesmen who brought this story to my attention said that the story had been planted by the intelligence agencies of Pakistan to romanticise the beastly Taliban in the eyes of young tribesmen. One of them said that he saw a group of teenage tribesmen discussing this story with keen interest. He tore into pieces the newspaper copy being held in the hands of the teenagers and had a two-hour long counselling session with them whereby he explained to them that such fake stories were planted in Urdu newspapers to lure young tribesmen into terrorism, and that it had nothing to offer but only death and destruction for FATA and its people. The young men seemed convinced, but the tribesman expressed the apprehension that there must be many teenage tribesmen out there who might have been misled into jihad by the story. The tribesmen have no hope in the Pakistani media. One of them even said that the Urdu media was capable of prostituting its conscience to spread malicious information about FATA. They, therefore, request the journalistic community in France to take note of the fake story and remain on guard so that their name is never again misused in misleading the tribal youth into a so-called jihad that clearly threatens the western streets with violence.

The tribesmen also guess that perhaps the journalist Mariam, referred to in the fake story, is Yvonne Ridley. They complain that Ridley has been at the forefront in defending Aafia Siddiqui. If the journalist Mariam is indeed Ridley, they expect her to come forward and condemn those who misuse her name and conversion to Islam — which is her sovereign right — for dirty tricks to lure innocent tribal youth into the fold of terrorism that has devastated FATA and threatens Ridley’s own country with violence. For once, Ridley should show that she stands with the victims of Pakistani state terrorism, like the people of FATA, rather than terrorists who enjoy covert state support.

The reason I wish to write about this planted story in Urdu daily Mashriq is to give to the sane-minded Pakistani English readership a glimpse of how the Urdu media has lowered itself in perpetuating the military establishment’s inflicted terrorism in FATA. I also understand that the forces of sanity in Pakistan have been reduced to a frightened state of mind by the religious extremists. They could not even rise to the occasion upon the assassination of Salmaan Taseer and the threats to Sherry Rehman. How can one expect them to stand up to the military establishment — the original force behind all terrorism in Pakistan — in support of the people of FATA, the people whose sufferings do not mean anything significant for the wider Pakistani society? I just wish to bring to their notice that disappointment and even hatred against the military is accumulating in FATA. The cowardice of those who should speak up for what is right will also be a factor in the case of any future catastrophe in Pakistan.

The writer is a PhD Research Fellow with the University of Oslo and currently writing a book, Taliban and Anti-Taliban