All Salafis Wahhabis and Takfiri Deobandis are not bad people but 95 percent of all terror acts (by Muslims) are from this group. All fruits are not bad but bad fruit surely grows on this tree.

Who were the two brothers?

The two Chechan brothers lived most part of their life in Kyrgystan although they were Russian nationals. Tamerlain Tsarnev (dead) attended college in Dagestan, had lived in Turkey and also received scholarship in Cambridge Massachutess. He was planning to compete in Boxing championships. The younger brother also attended US colleges.

They were apparently inspired by radical Islamist preacher. Feiz Mohammad, radical preacher of Lebanese origin who studied in Saudi Arabia and a former boxer who blames women for being raped and called for a prominent Dutch politician to be beheaded influenced them. He has been investigated by Australian police for inciting violence and terrorism, and was even captured on a British TV documentary encouraging children to become martyrs for Islam six years ago. He has regularly broadcast sermons from Al-Qaeda’s spiritual leader, Anwar al-Awlaki, on his website. He says… “Anyone who mocks our learning, laughs at the Islam [sic] and degrades it must enter death – decapitate him, cut off his head.” In one of his YouTube sermons –  “every innovation is misguidedHe has even claimed that Jewish people are pigs, and asserted that “anyone who tries to play with the sacred code of Shariah is kaffir… the only law for him is beheadness (sic), execution.” Now you see what ideology this is. The familiar innovation/biddat/Takfir/Islam supremacist thought process.
https://lubpak.com/archives/259511
http://www.bbc.co.uk/urdu/world/2013/04/130422_johar_car_zis.shtml 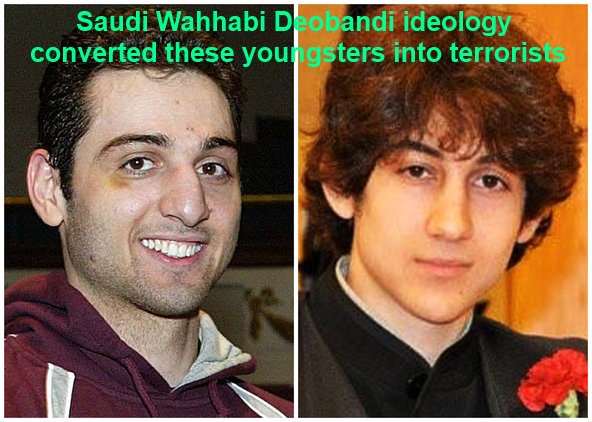 The pop Islamist – who is urban, educated, privileged young terrorist

Some of the statements of the suspect as published on a blog are:

We dont know yet if the brothers were directly linked to any Islamist militant org but they dont had to. Most recent Muslim terrorist plots were carried out by “lone wolves”, individuals or small groups, who received their Islamist indoctrination and explosives training through the Islamic internet of Jihadist social media.

It may turn out that the Tsarneavs attended a terrorist training camp at some point in the past. But it is more likely that they never did. Terrorist training camps still exist, but they are becoming relics when it comes to the new type of pop up terrorism favored by Jihadists abroad. His indoctrination comes from Jihadist videos of Islamic sermons and battle scenes from the front lines of Islamic terror. His bomb making knowledge comes from Jihadist training materials scattered around social media which tell him to make bombs and how to use them to the most devastating effect.

We have several examples of pop Islamists like these brothers who fell to the hateful Wahabi Salafi ideology:

·         Umar Farouk Abdulmutallab popularly referred to as Underwear Bomber was only 23 and son of  a wealthy Nigerian banker and businessman described by Times as one of the richest men in Africa. He was an Engineering student at University College London and earned a Mech Engg digree. He was also inspired by online sermons and speeches of AlQaeda linked Salafi speakers.

Argument that Islamisit terrorism is response to American presence in Muslim countries or that its caused by poverty, lack of education or persecution is absolute nonsense. I can quote countless examples of Islamist terrorists who were highly educated – professionals, doctors, engineers, PhD, people with affluent privileged backgrounds with upper class social status. In fact many terrorists in recent years come from educated urban middle class backgrounds. If American presence or persecution is the reason, why do we not have Shia suicide bombers in Pakistan? 21000 Shia have been killed – thats a clear genocide, why have the Shia not resorted to suicidal attacks? Why Pakistan’s persecuted minorities i.e. Christians, Ahmadis and Hindus resort to violence in face of persecution? There is clearly an ideological problem. This is an ideological war. The cause of Islamists terrorism is an ideology. Young, middle aged, old men and childrean are bought into this ideology. Poor, middle class and rich and affluent are bought into this ideology. Men and women alike -as the case of Afia Siddiqiq.

There is strong Islamist militancy in Central Asia where the slogan is global jihad. Islamists from Dagestan, Chechnaya, Uzbekistan, Kyrgystan have been found fightining and killed in Afghanistan, FATA and elsewhere in Pakistan, Syria and more places.

Nearly 20% of Checnaya’s 1.3 m population fled the country or took refuge elsewhere. Nearly 200,000 have been killed in 2  decade long war. They have been victims of a long war and persecuted by the Russians. The Islamists took advantage and a strong Islamist network established itself in Chechnaya. Russia installed its own dictator and exiled its legitimate PM. Putin continues to play the ‘Chechan Islamist terrorist’ card to show himself as tough against terrorism and strengthen his grip on power but it is vital to note that most Chechans are essentially a European nation and have took refuge in democracies when needed. They understand and believe in secularism and Islamist terrorists is a minority.

Muslim leaders in Boston condemned the attack, Friday prayer was cancelled. This is reactionary response, Muslim leaders and communities need to do pre-emptive work. Islamist militancy is a reality. It has a history. Responses like Muslims are not terrorists, Oh, we are being persecuted etc are not an answer. Muslim communities have to look deep into the problem and find out the ideological roots, financial funding, operational support etc. Yes, most Muslims do not want bloodshed but they have held onto a process of radicalisation through schools, preaching, mosques and centres of religious learning. This has to change. A cultural change is needed at homes, schools, mosques and at minds.

several mosques in North America and Europe are preaching extremism, bigotry and a very deluded version of international politics and the position of Muslims within it. The modus operandi for converting a normal mosque into an extremist mosque is very simple; replace the imam. Majority of these mosques are funded from Saudi sources. Many are run by Imams in their twenties that are graduates of the Yazeed institute in Saudi Arabia. All these people know is hate.

While there are many mosques in North America which are completely moderate, there are mosques which are not. I find it disgusting when exported preachers talk about enforcing Sharia to solve social problems in North America; the same version of Sharia where rape victims are stoned to death and where the onus of proving innocence lies on the victim, not the perpetrator. These mosques exist. Whether its the Khalid bin Walid mosque in Toronto which equates the Greeting of “Merry Christmas” with murder, unlawful sex and a host of other sins or other mosques which are awash with petro-dollars.

We use statistics to swipe our problems of honor killings and religious extremism under the carpet.  How much more injustice can be piled under this carpet of convenience is not something that should weigh on our conscience easily. Its about time more Muslims came forward and undertook their Islamic responsibility of protesting against the bigotry and injustice that is undertaken under the guise of Islam. Silence is acquiescence and the rest of the world then assumes that extremists represent us and stereotypes are enforced further. Protesting in the relatively freer societies of North America is the least we can do.

Khalid abul Fadl has experienced torture for his criticism of Wahabism and non-rational and non-progressive Islam. Maulana Saleem Qadri, Prof. Ghulam Murtaza Malik and Prof. Abdul Rehman, prominent Sunni intellectuals and leaders, were murdered in Pakistan for their exposition of a rational and moderate Islam.  Whether it is extremist Sunni, Shia or Wahabi Imams, we all risk being tarred with the same brush if we do not develop a culture of questioning them when they step out of line and go beyond their job description.

We saw a similar situation when the Bin Laden family was flown out of the US without questioning, for national security reasons. Here we have it again with Al-Harbi family.

After the bombings, a Saudi by the name of Abdul Rahman Ali Al-Harbi was hospitalized and became a ‘suspect’, then a ‘person of interest’. His apartment was searched by federal and local authorities. No confirmation has been given so far to his involvement. The Media were quick to claim his innocence, of course.

This brings us to the Boston marathon bombings. Foreign Policy is reporting that he’s ‘no longer a person of interest’, which means he’s “innocent”, right?

Perhaps a quick look at the Arabic sources should raise the eyebrows of every American relative to the extent of the problem at hand. Many from Al-Harbi’s clan are steeped in terrorism and are members of Al-Qaeda. Out of a list of 85 terrorists listed by the Saudi government shows several of Al-Harbi clan to have been active fighters in Al-Qaeda:

Then you have Al-Harbi clan members in Gitmo:

There are specific Saudi clans that are rife with members of Al-Qaeda, which makes it quite alarming as to why nearly a hundred thousand student visas are issued to these. Americans are clueless as to clan ties when it comes to terrorism.

Lesson one: Terrorism and crime by the Saudis is interlinked extensively within families, as we see in the Harbi clan.

Take Khalid Aldawsari, a Saudi national. He is a student and an Al-Qaeda terrorist who planned to use weapons of mass destruction in the U.S., to include an attempted assassination of president Bush. Aldawsari was not a lone wolf; he was backed by an entire system. The wealthy and powerful Aldawsari clan, which includes the powerful Sheik Saud Bin Mut’ab who hosted a support group for the terrorist defending him publicly while funding his legal team.

Just translate “We are all Khalid Dawsari” into Arabic and see how much support the terrorist gets. The Aldawsari clan’s main website (alduwasser.net) keeps track of everything that goes with every comment in support for the terrorist linking to other supporting groups.

The solutions lie in:

1) Creating awareness among Muslims that Orthodox Islam is fine they do not need to go to new innovative political movements and seek Islam.

3) Mecca and Medina together with Jerusalem should be made international cities of peace. So these cities cannot be used to further the agenda of one religious movement or another.