Marvi Sirmed, a traitor to liberal causes in Pakistan – by Rusty Walker 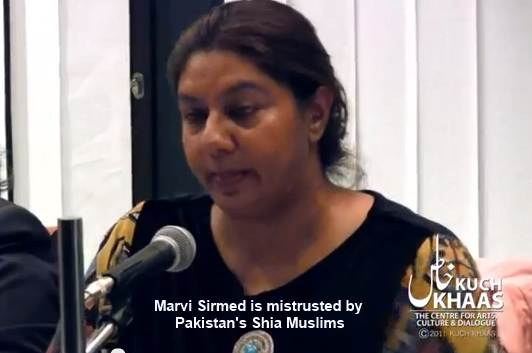 A year ago, I read a thought provoking interview of leading Pakistani political commentator and civilian-military analyst Dr. Ayesha Siddiqa in which she explains the increasing influence of Pakistani establishment on right-wing and (fake) liberal voices in the media.

Today, we face a state of military hegemony: political, economic and intellectual control. Today, there is not a single university in Pakistan or a young scholar who is not on the military’s payroll or network. They open shops called think-tanks for their young clients. A journalist, who does not take directions from the military, is a rarity in today’s Pakistan. Institutionally, this outreach is done through the ISPR and the ISI. But there are other informal channels as well such as the army chief himself. http://www.viewpointonline.net/militarys-predation-is-an-institutional-feature.html

In the last two decades, Pakistan’s military establishment has successfully cultivated its influence not only in the right-wing dominated Urdu media but also in the (fake) liberal dominated English media. Both groups (right-wing and fake liberals) often work in subtle coordination to promote agendas and goals of the military establishment. A case in point is the promotion of “Taliban are our brothers” discourse by the Jamaat-e-Islami and PML-N influenced Nawaiwaqt and “Taliban are our strategic assets and partners” discourse by the fake-liberal dominated Jinnah Institute. Similarly, promotion of Tahir Ashrafi and Ahmed Ludhianvi as progressive clerics by certain (fake) liberals (one of them currently heads a pro-establishment think tank) shows the extent to which fake liberals and their right wing Islamist partners cooperate with each other in the service of ISI/ISPR.

Given that LUBP blog has positioned itself as alternative media in Pakistan, a true voice of citizen journalism on issues of human rights, minority and women’s rights, it was clear that not only right-wing Takfiri Islamists but also pro-establishment fake liberals were annoyed by the LUBP blog and its various editors and authors.

It is, therefore, only natural to see pro-establishment fake liberals and Takfiri Islamists united against LUBP blog with the sole aim of terrorizing and silencing anti-establishment liberal voices.

This is where Marvi Sirmed, an NGO official currently working on various projects funded by the United Nations and the US government etc, who promotes herself as a champion of liberal values and human rights, fully exposed herself by close cooperation with Takfiri Islamists to physically harass and threaten a liberal blogger’s family.

In Marvi Sirmed, we see a traitor to liberal causes in Pakistan. She emulates the hateful ideology and tactics of Taliban. To disclose a home address of a liberal blogger to a pro-ASWJ Deobandi cleric makes her a co-conspirator to anyone who comes to harm there. Her seditious scheme forced Abdul Nishapuri, founder-editor of LUBP blog, to resign from the blog, the only reasonable course of action for any person to keep women and children in his family safe from the likes of LeJ Takfiri Deobandi militants, owing to the cruel hearted deception of Marvi Sirmed.

Stunningly, she gave out Abdul’s address to a pro-ASWJ Deobandi cleric intentionally to render him harm. This has denuded her of her cloak of liberalism revealing the naked truth: she is a Takfiri-Deobandi Salafist sympathizer. Why engage in such a seditious and treacherous act upon the honest progressive (former) editor of a pro-pluralist and human rights blog?

Strangely, I have noticed this degrading of moral fibre and the move from liberal to fake liberal in Marvi Sirmed and several of her colleagues and a number of the mainstream Pakistani press over the years. Years prior, they wrote liberal articles that seemed to be pro-human rights and balanced. What has happened to her? What has happened to the mainstream press in Pakistan? Has the ISI-ISPR been successful in hijacking the seemingly liberal voices?

I have read Marvi’s recent coarse tweets, and she only comes off as arrogant and jeering with a decided lack of class. Now, by divulging personal, private and confidential information about a blogger’s family’s whereabouts, she has put an innocent family’s lives in danger, including women and children. This reveals her true nature.

What kind of hateful person does it take to give out information knowing full well it could have brought harm to Adbul Nishapuri’s family! Perhaps the answer lies within recent connections she has made within the Jihadist community of Takfiri Deobandis. Marvi Sirmed is no friend to true progressives or true liberalism in Pakistan.

It does not matter who her relatives are, she did not choose them, but when she starts to behave like her notorious relatives and still professes to be a liberal, that is a serious cause for concern. It is also a reflection on her peers who claim to be champions the liberal agenda.

According to Shazia Najmi,

“Akram Lahori along with Malik Ishaq and Riaz Basra created Lashkar-e-Jhangvi (known as the Accursed Three) which has been carrying out the Shia genocide in Pakistan.”
https://lubpak.com/archives/242737

What a poisonous snake with toxic venom is Marvi Sirmed, who slithers around as a Liberal, but hides in the shadows of the jagged rocks of like-minded Salafist-Deobandi conspirators.

Those she would align with are the Takfiri Deobandis who are really powerless, even with their Saudi-funded money. It is only the powerless in the world that resort to their tactics, such as the use of suicide bombers. I believe they are leech-like opportunists, and so are the establishment press, as it is money, power and influence for which they sell their soul..

Blatant assassinations, of Salmaan Taseer and kidnapping of his son, Shahbaz Taseer, and assassination of Shahbaz Bhatti, shooting of Malala Yusufzai, murder of ANP’s Bilour, got world attention, and yet with the ASWJ-LeJ-LeT killers freed, what has changed within Pakistan? These events, and the genocide of Shia Muslims has silenced the current government, but, the Marvi Sirmed type and pro-establishment press is far from silenced, with their smug tweets; they are proselytizing extremism, and the centerpiece of this essay: brought out the worst in sordid acts such as Marvi Sirmed disclosing addresses of anti-establishment activists, to LeJ. Honest press in Pakistan, and honest government cannot be protected…who could blame them for fleeing to safe havens?

Until someone with the courage and conviction of Benazir Bhutto or someone from the top military brass joins the real liberals, the Army will hold the country hostage to its fear of coup, its Strategic Depth Frankenstein, and fund more and more fake liberals to move over and hold the Jihadist mindset…like that of Marvi Sirmed.

50 responses to “Marvi Sirmed, a traitor to liberal causes in Pakistan – by Rusty Walker”