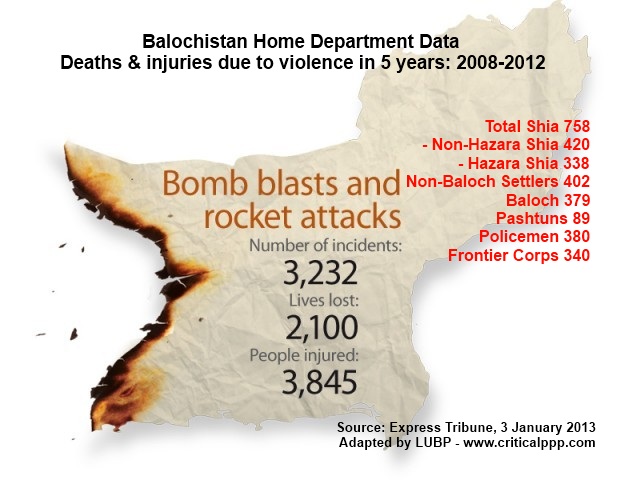 The past five years (2008-12) have been difficult for Balochistan according to statistics revealed by the home department. Violence in the province has claimed over 2,100 lives and left 3,845 injured in over 3,232 incidents of bomb blasts and rocket attacks in this period. Amidst rising sectarian strife and targeted killings, the government’s inability to deal with the situation appears more jarring than ever.

Throughout the Balochistan province, sectarian killings (Shia genocide) remain the biggest challenge. From 2008 to 2012, 758 members of the Shia Muslim community were killed by Deobandi militants (Sipah Sahaba Taliban) in 478 incidents. Of these, 338 victims belonged to the Shia Hazara community and 420 belonged to non-Hazara Shia communities (Baloch, Pashtun, Punjabi, Muhajir etc), indicating that Shia Muslims of all ethnic backgrounds remain the prime targets of target killings in Balochistan.

The province has become a base for a decade-long insurgency as well as a killing field for various sects. Banned Deobandi outfit Lashkar-e-Jhangvi (aka Sipah Sahaba or ASWJ) allegedly keeps targeting Shias throughout Balochistan. Accordingly, officials have beefed up safety measures from Quetta to Taftan and are even planning to hold meetings with Iranian authorities to discuss possible arrangements to facilitate the movement of Hazaras from Marriabad to Hazara Town and Hazar Ganji.

“The Shia community, the Shia Hazaras in particular, remains the prime target of violent groups in the province,” Balochistan Home Secretary Captain (retd) Akram Durrani told The Express Tribune when asked about these statistics. “We are struggling against militants, but the situation is not as bad as [what is] being reported.” He added that the increasing trend of violence in Balochistan is alarming, regardless of the disparity between the reported numbers and the actual happenings on the ground.

Here is a list of non-Hazara Shias killed in Balochistan: https://lubpak.com/archives/64797

The current report effectively puts to rest the theory that Shia genocide in Balochistan is a Hazara specific ethnic issue. It may be noted that a Hazara ethnic party, allegedly involved in human smuggling of Shia Hazaras, uses the Hazara ethnic card in order to exploit Hazara youth luring them to illegal and hazardous migration expeditions to Australia and Europe. https://lubpak.com/archives/229441 The Hazara ethnic killing discourse also suits those agencies and media persons who want to deflect the attention from country-wide Shia genocide taking place in all parts of Pakistan at the hands of Deobandi militants. https://lubpak.com/archives/226239

The Home Department’s findings also uncover staggering ‘kill and dump’ statistics. Around 570 dead bodies have been found strewn throughout the province, with 370 of the victims belonging to the Baloch community and 89 to the Pashtun community. The rest remain unidentified to this day.

Further still, over 402 non-Baloch have been killed in 498 incidents, and over 486 injured in multiple attacks.
Not surprisingly, security personnel have also suffered great losses. As many as 340 Frontier Corps personnel and 380 policemen have lost their lives in the line of duty, and 508 security officials in total have been left wounded.
Analysts say that despite the staggering figures, the provincial government is yet to review regulations pertaining to the movement of pilgrims under the Travel Agency Act of 1976. In one instance, police decided to refer the investigation of ‘sensitive cases’ to the Crime Investigation Department after the arrest of alleged terrorist Sher Dil of Lashkar-e-Jhangvi, also known as Babu, in a bid to curb violence in Balochistan.