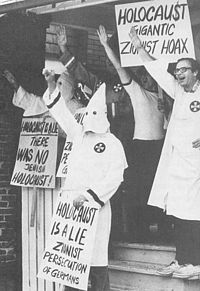 We urgently require good quality Holocaust Deniers. The powerful liberal fascist lobby is doing its best to spread propaganda that there is a Shia Genocide going on in Pakistan. Look at this baseless article:

Is Shia genocide an adequate term to describe the plight of Pakistan’s Shia Muslims? https://lubpak.com/archives/132492

We tried our best to counter this propaganda from our Good Liberal lobby headed by European Liberal, Ejaz Haider of Jinnah Institute. Terms like “sectarian violence”, “ethnic violence” and “Iran-Saudi proxy war” were used to ensure that our assets like Taliban and Marxist, anti-imperialist groups like Sipah-e-Sahaba/ASWJ would not look bad. However, it is becoming tough to counter this powerful propaganda:

Shia Genocide Database: A detailed account of Shia killings in Pakistan from 1963 to 2012 https://lubpak.com/archives/132675

We need more Goebbels to come out and counter this stuff. Thanks to our comrades from Neo-Nazi parties, we were able to expose Jewish conspiracy about the so-called Holocaust. Just like Hazrat Imran Khan exposed the half-baked ideas of Darwin. We need to learn from them. We need Holocaust deniers like Ahmedinejad and Sayyid Qutb. We need our Goebbels to come out and take attention away from this propaganda because Shias and Jews are the same.

So if there are some budding Goebbels, Mussolinis, Roedad Khans, Haroon-ur-Rasheeds, please step up. Uncle Ansar Abbasi and Hamid Mir cannot do this all alone. PTI cannot carry this heavy load and has done its best to divert attention to the Muslim drone victims of Burma.