Home  »  Featured • Original Articles   »   Double standards in the reaction to the hanging of Malik Mumtaz Hussain, the cowardly murderer of Salman Taseer

Lets get one thing clear. Mumtaz Hussain aka Mumtaz Qadri, the PML N- Punjab government appointed security guard, who cowardly murdered the unarmed brave Governor Taseer, deserved to be hanged. There can be no ifs and buts about this. Those who oppose the death penalty for such crimes need to face the reality of the situation in Pakistan.  Here cowardly murderers like Mumtaz Hussain and Malik Ishaq are brazenly unrepentant of their past crimes and boast of more murder and mayhem in the future.

What rankles is the double standards and the selective discourse that serves as a crucial context to this important, positive development in the history of Pakistan. 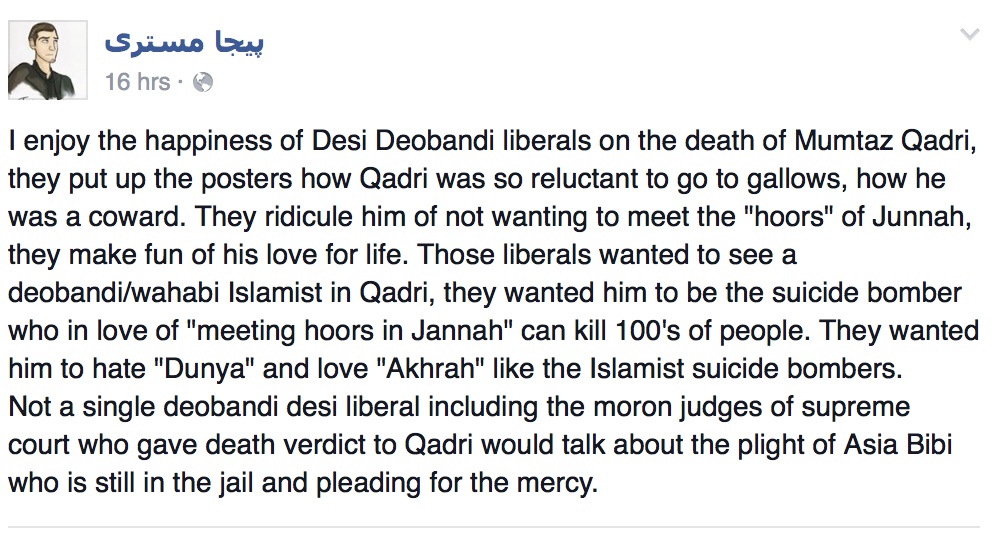 While the religious right has been consistently opposed punishment for cowardly fanatics like Mumtaz Hussain, the double standards on this issue stem more from the s0-called Deobandized liberal left.

When Deobandi terrorists who massacred Pakistani citizens and soldiers are given the death sentence, some of these liberals and “human rights” activists crawl out of the woodwork to protest against capital punishment.  Similarly, when the Pro Taliban Deobandi-dominated Supreme Court of Pakistan goes out of its way to favour mass-murdering ASWJ-LeJ leaders like Malik Ishaq, these liberals are  mostly silent.

When the same Malik Ishaq was killed by the security forces as part of the Zarb-e-Azab campaign, the same liberals who supported the Jamaat-e-Islami lead and ISI-sponsored right-wing “Lawyer’s Movement” started lecturing the families of victims who suffered #ShiaGenocide about due process!

Here is Shaan Taseer’s befitting response to those who were ranting about “due process” when ISIS-affiliated terrorist Malik Ishaq was finally eliminated by the state:

“If their past has taught us anything, they will take revenge for the killing of Malik Ishaq. Please look after your loved ones, and please do not corrupt the debate with silly notions of “due process”. Due process does not and can not apply to armed enemies of the state. Only the state has a monopoly of violence. Any person or organisation that raises arms forfeits their right to due process. The Lashkar-e-Jhangvi has the blood of of our countrymen on its hands and must be extirpated. When the day comes that they lay down their arms, we can talk of rehabilitation and due process then. Until then this is a righteous and necessary war.”

Malik Mumtaz Hussain’s deserved hanging is a positive development. It is a message to those bigots who  use a warped misinterpretation of faith to murder innocents. However, this hanging is simply the first step.

Malik Mumtaz Hussain was just a brainwashed foot soldier for Pakistan’s extremist lobby. Why are the same liberals who are (selectively) celebrating the overdue hanging of this murder silent on the role of Abad Dogar. Abad Dogar is the Deobandi PML N ticket holder in the 2013 elections who had placed head money on Taseer amounting to millions?

What about those in the PML N Punjab government who mishandled or even worse, deliberately positioned the brainwashed killer Malik Mumtaz in the security team for Shaheed Taseer?

What about Rana Sanaullah who lead a public hate campaign against the Taseer family?

Will the current PML N government and its blind (fake) liberal supporters care to answer these questions?