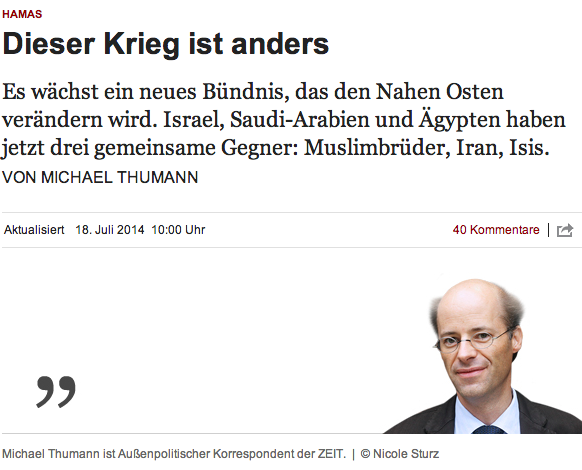 The war between Israel and Hamas seems to be replay of previous conflicts. Again, Hamas will try to rocket Israeli towns until the bitter end. Again, Israel will do everything possible to destroy the infrastructure of Hamas. Now the Israeli army has launched a ground offensive in which many civilians are likely to die in Gaza. So seems like there nothing new here in the Middle East?

Thing are very different from what they appear to be. This war is dramatically different from those in the years 2009 and 2012. Because this time Egypt and Saudi Arabia have different objectives and respond to serve their interests. The mainstream media of the leading Arab States used to display outrage over Israel- despite ground offensive – this time it is barely audible. This is nothing less than a profound policy change. Israel and these countries (Egypt and Saudi Arabia) have fostered an informal alliance that will change the Middle East.

The half-hearted overtures by the Egyptians in war speaks volumes . Israel agreed the Cairo plan immediately, Hamas refused. Al-Sissi’s predecessor Mohammed Mursi of the Muslim Brotherhood in 2012 had brought about in a few days a truce, access roads, he offered Hamas the opening of the border crossing at Rafah. For al-Sissi is this is out of the question. He does not want to see in Egypt become Hamasied. Better to have them in Gaza than make trouble for Sisi in Egypt and Gaza kept small by Israel. All with a nod and wink from the Saudis at a distance.

Although Riyadh and Jerusalem have no official relations, Saudis and Israelis meet regularly. Their approach shatters the old Middle Eastern taboes. In May, the ex-intelligence chiefs of the two countries had extensive discussions in Brussels. Turki al-Faisal is the key Saudi official in leading this alliance. In Munich, the former intelligence chief praised the recent Israeli Justice Minister Tzipi Livni. Israeli and Saudi diplomats meet in Morocco and India, in Vienna and Geneva. It is not just for coffee, something stronger for sure.

What brings them together is threefold: First, opposition to the Muslim Brotherhood (Hamas), secondly, hostility to Iran, thirdly, the threat from ISIS.

What if United States and Iran reach an agreement?

The marginalization of the Muslim Brotherhood is almost complete, the bombing of Hamas is the final stage of this campaign. But what Israelis and Saudis deeply concerned, is it the wish of the Obama administration to compromise with the Iranians. Their fear: In a compromise with the U.S., Iran could shake off the sanctions and still continue to run its civilian nuclear program.

Israeli and Saudi officials have held the view that Obama is a weakling. Saudi intelligence and Mossad agents  have long standing understanding, on how to proceed against Iran even after a possible U.S.-Iranian agreement. It has been well known that Riyadh will allow Israeli fighter jets the shortcut across Saudi Arabia to attack Iranian facilities. This can be hard to imagine in Berlin, but it is entirely reasonable in the Middle East logic.

The latest challenge for the informal allies Israel and Saudi Arabia is growing in the shape of the terrorist group ISIS in Syria and Iraq. The self crowned Caliph has made it clear that he regards the royal family in Riyadh as an enemy. And that he wants to liberate Jerusalem, which belongs to the Caliph (he is taking back what is his).  If ISIS cells infiltrate the conservative opposition against King Abdullah, it implode Saudi Arabia, and strengthen Hamas in Palestine. The governments in Riyadh and Jerusalem remain silent on ISIS. Eventually they will attack ISIS together. So that Iran alone does not appear as the savior of the Middle East against the ISIS Caliphate.