Home  »  Featured • Original Articles   »   The Human Side of Israel Palestine Conflict : No to hate speech and Fascism or Takfir – by Syed Farrukh Abbas 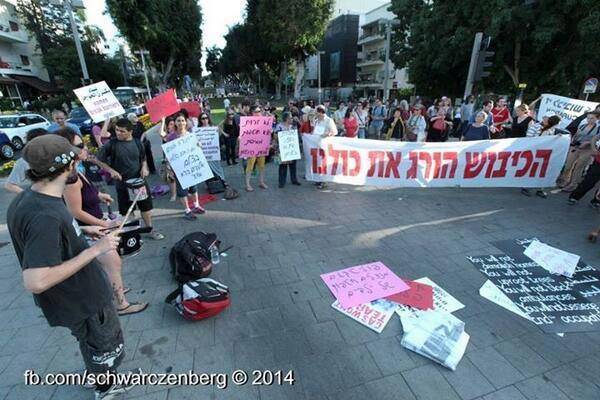 Banner: The occupation kills us All –

Israelis protesting in Tel Aviv against Netanyahu’s assault on Gaza.

Posting Hitler’s made up quote to try and prove that “Jews Are Bad People” and praising him for killing millions, just because they were Jews on the other side lamenting for Gaza and cursing Israel for killing innocent people of Gaza… if you think it’s cool, it’s not.

Neither is posting a Quranic verse without its proper context saying: “Jews can never be our friend”**. Well, you don’t hate all those people, or kill all those who are not your friends , do you?

Peaceful Jews are in the majority just as peaceful Muslims are. And they are protesting in London and even in Tel Aviv (Israel), against Israel’s assault on Gaza, and killing Innocent Gazans. Can you guys protest against Hamas for killing innocent Jews? (Seriously, a new term: innocent Jews. You must not have heard it).

Obviously there’s no parallel between more than 100 Palestinians killed by the Israeli state and one Israeli injured by the Hamas militants. But being a human, can’t we understand there are humans on both sides? I know we Pakistanis have got little love for the Israelis (just FYI : there are still more than a million Arab Muslims living in Israel) but aren’t they human? Shouldn’t we be looking at the human side of this conflict?

I condemn the Holocaust as much as I condemn Israeli attacks on Gaza. Condemning crimes against humanity should not make you a bad Muslim and condemning Israel for attacking Gaza shouldn’t make you a good Muslim either. They (hypocrites) cry about Gaza, while ignoring thousands of people protesting against the mass murder of their fellow countrymen with hundreds of dead bodies on the streets, they actually make fun of those who condemn the killings or terrorism in their own country, calling them names and abusing them, labeling them “traitor”, “kafir” etc.

Then there are some so called “liberals” justifying what Israel is doing in Gaza, because their master America is supporting Israel like always. These people really do not have an iota of shame. They justify whatever their imperialist masters are doing in the Middle East or elsewhere in the world.

If saying that no innocent should be killed, by Israel or Hamas, makes me a Jew or someone’s agent, I don’t have a problem with that. All I want to say is, be a human first please. You don’t have to be anti-Semitic or anti-Jewish to be a good human or a good Muslim.

Instead of using Hitler’s made up quote to ridicule and curse Jews use this one of Baba Guru Nanak Dev ji: before becoming a Muslim, a Hindu, a Sikh or a Christian, first be a human being.