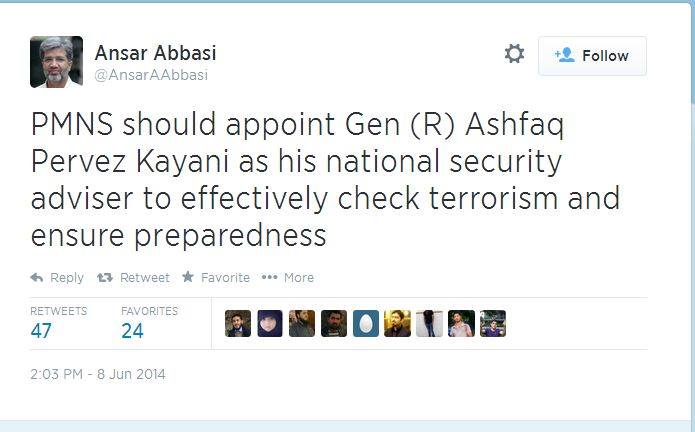 Please refer to this tweet of Ansar Abbasi and his recommendation of Former DG ISI and Former Chief of the Army Staff, General Kayani. And yet some people would have us believe that there is a principled struggle between GEO/Jang Group and the military establishment. I leave it to the readers to infer what they may.

Inspite of deep reservations with the discourse of some GEO anchors and “journalists”, we must always stand for their right to free speech. Their narrative must be countered with arguements and NEVER violence, strong arm tactics and mob pressure to collectively punish all GEO employees and journalists. We most categorically condemn sany violence against any journalist. One most also remember that some GEO journalists like Ahmad Noorani and Taha Siddiqui have taken great pressure and pain to present the counter opinion and they have the respect.

Similarly, some have done a disservice to the field of Journalism with their mixing of truth with lies and half truths and of misappropriating the Baloch cause to draw a dishonest parallel and sympathy for the Taliban. These journalists must be countered with facts and arguements.

In the GEO vs ISI “debate” some of us saw an uncanny parallel to the Lawyer’s Movement. The Lawyer’s Movement was never really about the Supremacy of the Law, the Constitution, principles, democracy and the fundemental rights of the people of Pakistan – it was about competing centers of power. Between a military dictator and deeply compromised PCO Judges who were latter restored on the pressure of the new Army Chief.

Similarly, how can anyone expect us to believe that serial Taliban apologist who undermined civilian rule (repeatedly) with their irresponsible reporting and proven falsehoods are suddenly the new “anti establishment” icons. The same folks who pressured a weak and spineless former government to Ban Youtube cannot be overnight transformed into icons of “Free Speech”

These are important questions that deserve some serious introspection instead of a herd mentality that wants to confirm to artificial binaries.

In the meanwhile, check out this tweet above and get an appreciation of Irony. 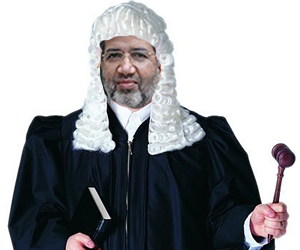