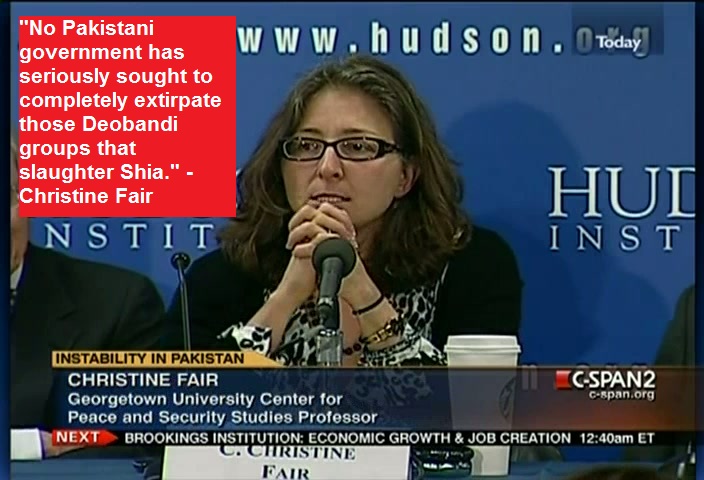 LUBP would like to highlight Professor Christine Fair’s article on Shia genocide in Pakistan. The article is an important addition to the increasing literature available on this topic – a topic not deemed important enough by either the Pakistani State or the elitist  “liberal” “intelligentsia”.

There are a number of areas where this article separates itself from the typical wishy-washy obfuscation that passes for human rights activism in Pakistan.  For starters, it correctly identifies the Shia killing militias like the Sipah-e-Sahaba/ASWJ/LeJ by their specific Deobandi identity.  This is an important distinction as even Sunni Barelvis/Sufis in Pakistan are being targeted by the same  Deobandi militants.

It was common practice amongst Pakistan’s mostly compromised media to lump the Sunni Barelvi victims of terrorism along with the Takfiri Deobandi perpetrators within the same category.  This was done by using vague terminology such as “radical Sunnis”, “Islamists” or “Sunni Shia sectarian violence” – thereby completely obfuscating the complex dynamics where Saudi-funded and agency-patronized Deobandi militants have declared open season on Pakistan’s diverse religious groups and sects.

Similarly, Professor Fair has also highlighted the global implications of ignoring this genocide. LUBP has published on both the historical and ideological connections between the founders of Wahabism and Deobandism. This centuries old connections explains the ideological and logistical partnerships between Al Qaeda and the Sipah Sahaba Taliban (ASWJ and TTP) and why the world can no longer continue to ignore the violence perpetrated by these groups.

From the horrific enslavement and forced conversion practices of the Salafi/Wahabi terrorist group Boko Haram in Nigeria to the murderous Deobandi ASWJ-LeJ in Pakistan, the common thread of Salafi-Deobandi ideology runs through. As the world suffered 9/11, Madrid, 7/7, Fort Hood Massacre, Bali and Boston Marathon, few questioned the specific Wahabi and Deobandi ideology that inspired this senseless violence.  The world can no longer afford to sacrifice the specific identification for the causes of this terrorism at the altar of political correctness.

For Shias in Pakistan, the othering started right at the beginning where the Shia founder of Pakistan, Muhammad Ali Jinnah was given a public Deobandi funeral and his Shia identity denied to the public in his death in 1948. Mufti Shabbir Ahmed Usmani, the hardline Deobandi cleric who led the funeral of the Shia politician Jinnah was one of the lynchpins of dragging the new State of Pakistan towards his brand of theocracy. The foundation for this theocracy was laid as early as 1949 in the shape of pro-Deobandi Objectives Resolution.  The first Shia massacre of over 100 Shias by Deobandi-Wahabi militants took place in 1963 in Therhi Sindh, nearly 2 decades before the Iranian revolution.  Another State sponsored pogram of Shias took place in Ali Basti, Karachi in 1978 – two years prior to the Iranian revolution. Of course, the persecution and massacres of Shia Muslims started 1400 years ago when Umayyad Caliph Muawiya and his son Yazid started killing Shia and Sunni followers of Caliph Ali and Imam Hussain.

In Pakistan, the catalyst for the State-sponsored anti-Shia and anti-Sunni Barelvi movement took place under the dictatorship of General Zia ul Haq (1977-1988). Supported by Saudi Arabia, the General officially aligned the Pakistani State with his own Deobandi ideology. Mufti Shabbir Usmani’s progeny – in the shape of Mufti Taqi Usmani, Mufti Rafi Usmani etc, occupied a central pillar along with the JI and the various groups of JUI.  The two biggest mass resistance movements against General Zia ul Haq were not led by pseudo secular elitists or drawing room chatterers. The PPP-led MRD movement was supported by the Sunni Barelvi shrines who offered protection to the PPP activists from a brutal crackdown by military agencies. The other movement was led by Pakistani Shia activist, Mufti Jafar Hussain who successfully thwarted General Zia ul Haq’s attempts to forcibly impose Deobandi-Salafi based Sharia on the rest of Pakistan.

After Mufti Jafar Hussain successfully led a mass peaceful protest in July 1980, it was General Zia ul Haq’s chief aide, General Akhtar Abdul Rahman, the ISI Chief, who led the delegation that had to backtrack from Zia’s forced Sharia initiative.

We hope that Pakistan’s anchors, columnists and analysts will take courage from Prof Fair’s bold and clear stance on Shia genocide at the hands of takfiri Deobandi terrorists. In order to stop this genocide from taking further pace, it is important to clearly identify, condemn and stop the Deobandi killing machine.

Who’s killing Pakistan’s Shia and why? – by C. Christine Fair 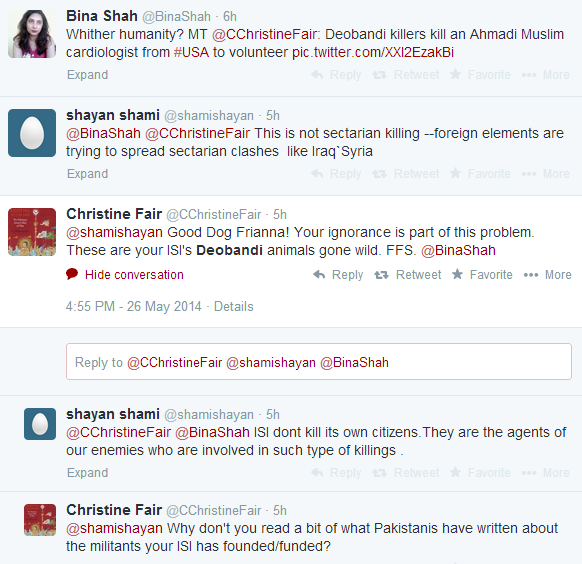 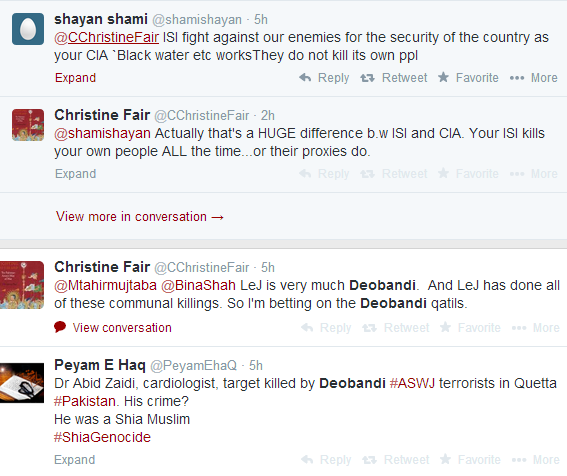