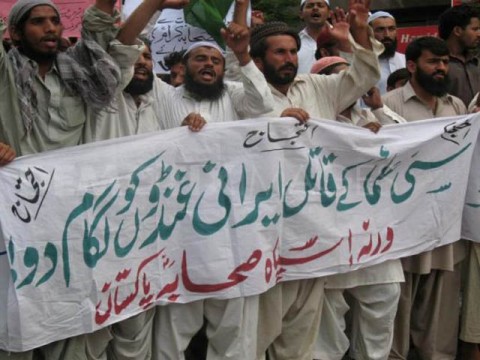 A debate that took place on a Facebook forum highlights the nature and reasons of Shia genocide in Pakistan. The conversation was initiated by a repetition of oft-repeated theories that are deeply insensitive to the victims who in this case happen to be Shia Muslims in Pakistan. One is disappointed to note that such conversations are not the exception but sadly the norm amongst Pakistan’s educated elite which wants to justify and rationalize Shia genocide while discounting its own sectarian prejudice against Shias, Pakistan’s most target-killed faith group, with more than 19,000 deaths in recent decades.

Only recently, an international survey report by Pew stated that only 50% of Sunnis in Pakistan consider Shias as Muslims. This also explains why there is either complete silence or massive misrepresentation of incidents of Shia genocide in Pakistan. The latest incident of misrepresentation is not by daily Ummat or Zarbe Momin but by “liberal” Express Tribune which incorrectly reported the Shia massacre of Gilgiti passengers in Naran as a Sunni massacre. The news item was later corrected after a massive protest on Twitter.

There is an unfortunate tendency to dilute the suffering of those who are on the wrong side of the policies dictated by the military establishment. It is time that Pakistan’s rights activists and persecuted communities realize that civil society is not necessarily objective when it comes to Shia Genocide but in fact often peddles the manufactured discourses of the state – barring the exceptions of course.

One of the most commonly used tactics to misrepresent and indirectly justify the ongoing Shia Genocide in Pakistan is to present it as a Saudi-Iran Proxy war. This is a false binary that not only confuses the issues but seeks to paint all Shias as Iranian fifth columnists thereby painting a target on their backs.

This false symmetry also occludes the culpability of the Pakistani state and is an insensitive tactic to dilute the suffering and misery of the targeted Shia communities in Pakistan. Most importantly, if Shia Genocide in Pakistan is an outcome of a Saudi-Iran proxy war, what about the Pakistani state apparatus? It is crystal clear whose side ‘they’ are on.

If it was the manifestation of an Arab-Iran war, it would logically have been a two-way affair in Pakistan rather than one way Shia Genocide.

The reason and motivation for Shia Genocide is grounded in the terrorist psyche of anti-Shia groups while the vast majority of people is a mute spectator of all such brutalities. The judiciary and security agencies lend tacit support to these killers.

Shias are killed in Pakistan because our civil-military bureaucracy supports/funds/protects/patronizes non-state actors for its “strategic” objectives both within and outside of Pakistan. If Shias are being killed by Sipah-e-Sahaba/Ahle Sunnat Wal Jamaat/Lashkar-e-Jhangvi because they are somehow all Iranian fifth columnists, then what about the Ahmadis who are being killed by the same SSP/LeJ murderers?

It is not just Shias who are their victims but Ahmadiyya Muslims, Sunnis (Barelvis, moderate Deobandis), Christians, Sikhs. All these groups are suffering at the hands of non-state actors. This is not a revelation. The excellent Peshawar Declaration of 2010  details a similar hypothesis. Ali Basti (Golimar, Karachi) was attacked in 1978 by IJT-JI fascists nearly two years before the Iranian Revolution.