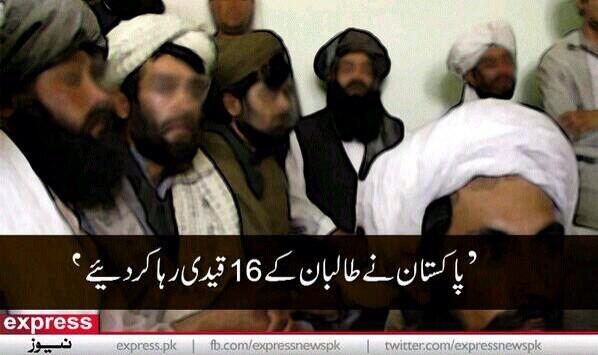 The cat is out of the bag. The Government of Pakistan and its Prime Minister have acknowledged having released sixteen of the Taliban prisoners. Credo quia absurdum. “I believe because it is absurd.” Yet again, a plainly desperate government in Pakistan has sacrificed its people’s self-respect and its security in a single grotesque gesture. While the government’s explanations seek to justify this terrorist release as a lamentable but still needed condition for peace talks with the Taliban, it is perfectly obvious that no such talks could produce meaningful results. This will represent little more than an officially opened back door for the next massacre of Pakistani women and children by terrorist murderers. It would seem counterproductive to achieving a genuine peace to set free those who had so brutally done all they could to ensure peace found no footing. This will send a clear message that even the most savage acts of violence against even the most innocent of Pakistanis will not earn one lasting punishment, but rather a hero’s status. And terrorists will be emboldened to continue on their destructive path. And peace will remain elusive.

Sadly, this is the kind of grovelling to terrorists on their soil to which Pakistan’s leaders have been reduced. You have to be a prime minister or a seasoned diplomat or a four-star general in Pakistan to not to understand that setting terrorists free just doesn’t make any sense.

Every state has an obligation under international law to prosecute and punish terrorists. This obligation derives in part from the vital expectation, “No crime without a punishment.” It is codified directly in many basic sources, and is also deducible from the binding Nuremberg Principles (1950). Terrorism is a serious crime under Pakistan’s and international law. Notwithstanding Pakistani government assurances to the contrary, some of the Taliban terrorists released in its good will gestures were also guilty of related crimes against Pakistanis. These are Nuremberg-category crimes – so egregious that the perpetrators are known in law as Hostes humani generis, or “Common enemies of humankind.” Although Pakistan has an unequivocally clear jurisdiction to punish crimes committed on its own territory, it may sometimes also have the right to act under certain broader principles of “universal jurisdiction.” No government has the legal right to free terrorists as a “goodwill gesture.” No matter what might be permissible under its own Basic Law, any political freeing of terrorists by Pakistan would always be impermissible.

And then it’s not just about law. it’s about tens of thousands of Pakistani families whose loved ones were victimized by Taliban terrorists. It’s about the future Pakistani victims in the face of the violent ways of the Taliban. It’s about what’s best for Pakistan’s national security. What sort of people and government would agree to free the murderers of its own women and children, and without any plausible expectations of a reciprocal peace or justice? It can only be the people and government of Pakistan.

The only thing we, in Pakistan, don’t know is what is going on behind the scenes to make our leadership play this game. Anyone who says they know what is going on publicly probably doesn’t know anything. Anyone who knows is keeps quiet. Walking away from the sham negotiations will surely hurt. But as this surrender to the Taliban’s demand indicates, the price for remaining at the table gets higher by the day.

It has been clear for some time that Pakistan is playing a sucker’s game here. Now it sends yet another message to the Taliban that they don’t need to change their ways. They can keep on encouraging terrorism, they can keep promoting a culture of violence. That won’t be good for Pakistan, for its people, or for peace.